Following my recent correspondence with Dr Hisashi Nakamura, it gives me great pleasure to reveal that he has graciously agreed to share his thoughts on the writing of this ancient Japanese poetical form in English. I have decided to divide Dr Nakamura's extensive essay on tanka into parts (with his consent) and shall be featuring it on the third Sunday of the next several months. 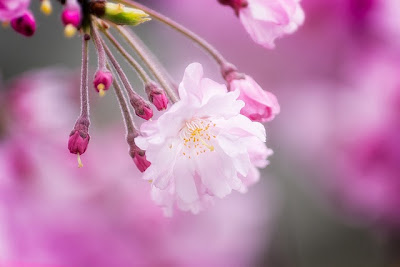 My Thoughts on Tanka
Hisashi Nakamura

How I came to write tanka in English.

I rediscovered the fascinating world of classical tanka thanks to the development of the Internet which made it possible for me to have direct access to the rich archives of tanka poetry in Japan from my home in the city of York. I enjoyed reading the 21 Imperial Anthologies of Waka compiled between 905 and 1439. “Waka” means “Japanese Poems” which include tanka and a few other forms. The anthologies contain well over 33 thousand tanka in total. I also rediscovered the value of Manyoshu which was compiled some time after 759 and contains about 4,500 poems by about 450 identifiable people, of which over 90% are in the form of tanka.

I thought I would like to share the beautiful world of classical tanka with my friends in Britain, especially with my colleagues at work who were teaching Modernism and Imagism as part of their English Literature courses at the university where I was working as “Japan Projects Officer”. I also thought it would be possible for Art students to use the imagery of classical tanka as a new source for their creative activities. For these reasons I tried to gather classical tanka translated into English, but soon encountered several problems. (To be continued...) 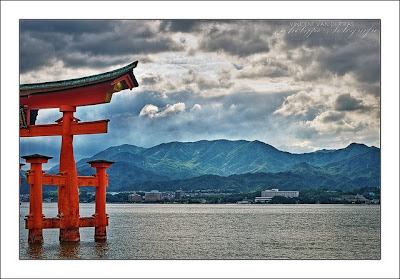 
The characteristics of classical tanka may be summarised in seven points. (Two of which will be the focus of today's discussion.)

Some poets in the 12th century emphasised that “less is more” where simple descriptions could have lingering suggestiveness more than a lot of detail. Fujiwara no Teika wrote the tanka below in 1186 when he was 24 years old. Here he thinks that the scene in front of him is perfectly beautiful without anything that typifies the beauty of a season such as cherry blossoms or crimson leaves. His discovery of a new sense of beauty where a monochrome world could have more depth than colourful images contributed to the establishment of “wabi” and “sabi”.

As far as one can see,
No cherry blossoms
Or crimson leaves-
A thatched hut by a bay
In the autumn dusk.

In the early 20th century Jun Fujita, whom many consider to be one of the first people to write tanka in English successfully, published the following in the USA. Reviewing this tanka Harriet Monroe who was sometimes called the midwife of Modernism wrote in Poetry in April 1925: “I doubt if a thousand carefully toned words could match the impression it gives of stillness”:

Milky night;
Through slender trees in drowse
A petal-
Falling.

Tanka poetry avoids intellectual argument. It is a realm of sensibility where feelings and emotions matter. This aspect was observed in 1963 by Prof Geoffrey Bownas who wrote about the characteristics of tanka: “There is little opportunity or desire to escape to the intellect or the didactic.” The same point was expressed by Origuchi Shinobu (1887-1953) when he was asked what differentiated tanka from other forms of poetry. His answer was that good tanka usually did not have intellectual substance, but had pure suggestiveness. He used a simile: “Tanka is like squeezing snow tightly in the hand. There will be nothing left in your hand, except water. But you feel something.” A tanka that illustrates this well is the following written by Monk Jukuren (1139?-1202).

This loneliness
Has no colour of its own.
On the mountain
Where cedars stand
In the autumn dusk.

Because of the lack of intellectual substance some modern poets in the West do not discover the value of tanka. Tanka poetry seems to be too simple for some people. However, sensibility sometimes transcends intellectual power. The following was composed by Princess Shikishi a year before she died in 1201. About 400 years after that, William Shakespeare wrote in The Tempest: “We are such stuff as dreams are made on, and our little life is rounded with a sleep”.

Broken by the sound of the breeze
That plays on the bamboo leaves
Near the window
A dream even shorter
Than my fleeting sleep.

Our challenge today, is to explore the tanka form as presented here by Dr Nakamura. There is no limit to the number of tanka you may write, and you may also share older examples of tanka you have written, if you prefer. Dr Nakamura has shown great interest in our writing group and a link to this prompt will be forwarded to him, so he can pay us a visit in the Imaginary Garden.

Thank you Kerry. I haven't written tankas in a while. I love the form and flow of them.

A very interesting article Kerry ~ I too haven't written tanka in a while, so I like to look at it with fresh new eyes ~

I do love this form! Thank you for sharing his insight-I am excited!
:D

I note that Dr Nakamura does not lay down any specific guidelines regarding syllable count, which I find refreshingly freeing. Five brief lines seems standard.

Kerry, you know what struck me about this post ~ That you didn't talk about the syllabic count, but instead on the meaning & characteristics of a tanka ~ The spirit, rather than external trappings ~

As a poetry novice I'm only just beginning to learn about the different forms and styles. Thanks for the introduction.

I composed this tanka with a heavy heart .. I lost a dear friend on Wednesday.

(I enjoy this form immensely, thanks for the challenge)

each time I come here I learn something new...quite and experience for an old dog... :)

thank you Kerry for introducing this.. i've never tried writing like that. it's rewarding.

not entirely sure I get the drift yet, but worth a doodle. Thanks, Kerry

I have really enjoyed Tanka in the past and haven't done one in quite a while. Was at a horse show all day today and will be back most likely with something for Open Link Monday. I will post it here, though, and visit after I write mine. :)

This is such an excellent post...I love the commentary and the examples. It's so refreshing to see poetic forms (like this one and the haiku),that have come up through history being featured and appreciated/respected...explored and given voice. Thank you, Kerry!

Thank you, Kerry. I love the minimalist approach of Japanese poetry forms, so much said in so few words. A very informative and inspiring post.

Tanka will be refreshing to read and write, Kerry. Thank you.

@Bill, Unfortunately I must remove your link. This prompt is exclusively for the writing of tanka, as poetic as your photo may be.

This was my first attempt at tanka, but I am working on a few more, so expect to see me popping in and out this Sunday. These poems need practice!

I'm on a roll here. Please join me in linking up any more tanka you write in the next few days.

Marian, a very happy birthday to your Jack tomorrow!

thank you, Kerry! i'll pass along your greetings to him. ten feels like a big milestone :)

Love this challenge! Thank you~

This was not easy for me... mine aren't as pretty or eloquent as they should be I'm afraid. I'll be back to visit after putting my little guy to bed.

wonderful interview and beautiful poetic form... so expressive! Thanks so much for sharing this.

No problem I had posted before realiseing what I did. I ejoyed the poems though

I enjoyed reading all the tanka submitted for this challenge. Thanks to all who stopped by to comment on my blog, and for the encouragement. It really is a lovely form :)