The House of Times Past
I knocked on the door of times past, no one answered.
I knocked
a second time and then another and another.
No answer.
The house of times past is halfway covered with vines
the other half is covered with ashes.
The house where no one dies and I am knocking and calling.
Just for the pain of calling and not being heard.
Just only to keep knocking. The echo brings back
my anxiety of opening these frozen steps.
Night and day mingle together in the waiting
in the knocking and knocking.
Times past certainly do not exist.
And the empty building has been condemned.
Hello there toads! It's Kenia here and today I start to introduce you to my favorite South American poets and writers. I've chosen to begin with a fellow Brazilian, Carlos Drummond de Andrade, who lived in the same State I live in. He was born in 1902 and died in 1987 - I was nine years old then and vividly remember going to an exhibit of poems and photographs of his. 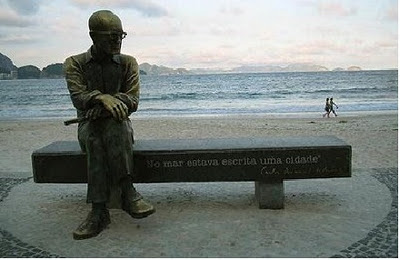 On vacation in Rio de Janeiro, one can find a bronze statue of Drummond sitting on a bench on Copacabana sidewalk (vandals have stolen its glasses five times so far this year). 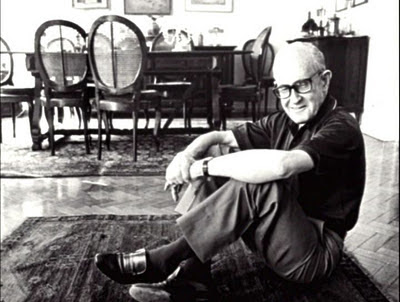 Drummond made use of free verse, and never depended on a fixed meter. His work is one of the most unique in contemporary poetry, his poems are often described as humorous, full of movement, self-knowledge, and appreciation of the transitoriety, his central concern is primarily metaphysical.
Don't Kill Yourself

Carlos, keep calm, love
is what you're seeing now;
today a kiss, tomorrow no kiss,
day after day tomorrow's Sunday
and nobody knows what will happen
Monday.

Love, Carlos, tellurian,
spent the night with you,
and now your insides are raising
an ineffable racket,
prayers,
victrolas,
saints crossing themselves,
ads for better soap,
a racket of which nobody
knows the why or wherefor.

How could I resist a challenge like this? Thanks, Kenia.

I'm so excited about this challenge.. can't wait to have an hour in this day to devote to it. Thanks Kenia.

Wow, this is an amazing challenge!
I had to give it a try!
Thanks Kenia for pushing my gray mattered poems into new frontiers!
:D

Thanks everyone participating on my challenge today. You're awesome guys. <3

Loved this challenge. I think that most writers are metaphysical whether we realize it or not!

ack, i got all boxed up on this one. i feel like i have better examples. but, here it is.

I have had my head in metaphysics half a lifetime ... strange for one as literal as I.

love this!
hoping to be able to set aside some time this week to set to.