Calling all toads on Boxing Day... 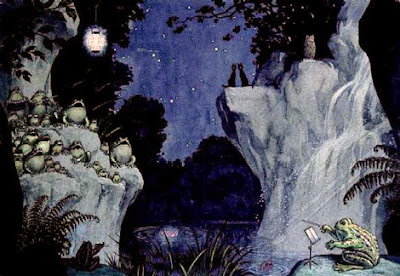 The Frog Chorus by Alfred Bestall


Boxing Day is a bank or public holiday that occurs on December 26, or the first or second weekday after Christmas Day, depending on national or regional laws. It is observed in Australia, Canada, New Zealand, Great Britain, some other Commonwealth nations, and across most of the Province of Ulster in the north of Ireland but where observed in the Republic of Ireland, it is recognized as St. Stephen's Day.   In South Africa, Boxing Day was renamed Day of Goodwill in 1994.
The exact etymology of the term "boxing" is unclear and there are several competing theories, none of which is definitive. The tradition has long included giving money and other gifts to those who were needy and in service positions. The European tradition has been dated to the Middle Ages, but the exact origin is unknown and there are some claims that it goes back to the late Roman/early Christian era; metal boxes placed outside churches were used to collect special offerings tied to the Feast of Saint Stephen.
In the spirit of sharing on the day after Christmas, link up a poem, either old or new for our enjoyment. Please remember to support the work of the other poets who have linked their work alongside yours, by reading and responding to their work. These are the gifts freely given within the Real Toad community.

Imagined By Kerry O'Connor at 12:04 AM
Email ThisBlogThis!Share to TwitterShare to FacebookShare to Pinterest
Labels: Monday Toads

Hope you're having a wonderful holiday season. And thanks as always for hosting this! Here's my latest limerick and Limerick-Off challenge: Dip Your Toes In Limericks.

This is one of my older poems, written originally at Yuletide 2009, when I had just begun to think I might be able to write poetry - I'm still not sure it's altogether a good idea ;)
I love the Norse mythologies and this was inspired by their ancient ideologies in which lie many roots of our modern traditions.

Celebrating an odd day when we're feeling glad it's over but sorry that we have to wait a whole year for another Christmas!

Boxing day for us means shopping so off I go.

I will return later to read all the posts here.

I linked a poem I wrote earlier this week.

Have a great day everyone. I'll be off on my new bike.

I linked up to one of the few triolets I've written, a form I'm certainly hoping to get some more practice with. Hope everyone has a very Happy New Year!

Wonderful to see so many poems being shared here today.

Without meaning to cause offense, however, I must ask that bloggers do not use this Open Link in order to promote their own interactive blogsites or memes. Real Toads does not use other sites to promote its challenges or prompts. The invitation here, is to share your work freely, without agenda.

Thank you for understanding.

I am off on Boxing Day woohoo!

I linked to something short today, another piece from that book-of-the-future! We don't do Boxing Day here in the United States, but I'm not even planning to do any shopping except for groceries in the near future! Crazy day out there. I'll let the rest of y'all do the other kind of shopping for me! 8-)

Most must have this one already, it's my latest, I'm writing something new today. Kisses toads!

Lots of fun with Paul and the toads there, Kerry. Thanks!
Nothing quite so entertaining has developed out here in Western Canada, but we haven't heard from Sherry yet, so there's hope yet for the wild, wild west.
K

an older poem, but I will probably be back again soon when I finish off a more recent :) happy boxing day! though I always call it Stephen's Day

Wonderful to see you here OT - and it must be the Irishness of you that calls it St Stephen's Day, to be sure.

NO WAY will I shop the day after Thanksgiving or Christmas. I don't care how good the deals are :) But I did go to the movies ... "War Horse" by Steven Spielberg was amazing!

This is a good idea! I linked something that I wrote as a flash fiction years ago, inspired by the blogging world!