Hello toads and visitors to the garden !   I am happy to introduce you to another poet, Carilda Olivar Labra, who is known as one of the most influential Cuban poets. Although her poetry is philosophical and social, Carilda considers that her great theme is love, that which she has felt straight from the heart. 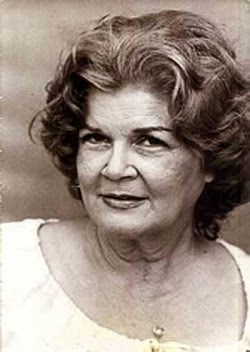 Carilda was born in 1922 in Matanzas, Cuba, in a Colonial home now under preservation by the state. She graduated with a degree in civil law from the University of Havana and went home to practice law for some years in the city of her birth. She also taught as a professor of Fine Arts there.

Her debut collection in l943,  immediately established her as an important poetic voice.  made her famous: the coveted National Prize for poetry came to her in l950 as a result of the popular and notorious book,  1949. In honor of the tri-centennial of Sor Juana Ines de la Cruz in a contest sponsored by The Latin American Society in Washington D.C., in 1950, she had also received the national Cuban First Prize for her poems. Her work was highly praised by Gabriela Mistral, the Chilean poet and first Latin-American woman to win the Nobel Prize for Literature in 1945. In 1958, Labra published  which added to her notoriety as a blatantly erotic woman. The book concerned a theme which has dominated her poetry--that of lost love--as it was written after the unfortunate and untimely death of her second husband.

She was a pioneer of woman's independence in her homeland. She has emerged today as one of Cuba's leading poets. She was a brave pioneer writer of the plight of the Cuban people under cruel colonialism. Such works as  (, 1950);  (, 1953);  (, 1956) display such sentiments. Today, in Spain a foundation offers "The Carilda Oliver Prize for Poetry," and a documentary of her life has been produced. She has travelled throughout Spain, Eastern Europe, South America and the United States giving recitals and interviews.

I ask if I'm wise
when I awaken
the danger between his thighs,
or if I'm wrong
when my kisses prepare only a trench
in his throat.

I know that war is probable;
especially today
because a red geranium has blossomed open.

Please, don't point your weapons
at the sky:
the sparrows are terrorized,
and it's springtime,
it's raining, the meadows are ruminating.
Please,
you'll melt the moon, only night light of the poor.

It's not that I'm afraid,
or a coward,
I'd do everything for my homeland;
but don't argue so much over your nuclear missiles,
because something horrible is happening:
and I haven't had time enough to love.

Today, I brutally greet you
with a grunt
or a kick.
Where are you hiding,
where have you fled with your wild box
full of hearts,
and your stream of gunpowder?
Where are you now;
in the ditch where all dreams are finally tossed,
or in the jungle's spidery web
where fatherless children dangle?

I miss you,
you know I do--
as myself
or the miracles that never happen--
you know I do?
I'd like to entice you with a joy I've never known,
an imprudent affair.

And her well-known love poem is:  I go crazy, my love, I go crazy

I go crazy, my love, I go crazy
when I go in your mouth, delayed;
and almost without wanting, almost for nothing
I touch you with the point of my breast.

I touch you with the tip of my breast
and with my abandoned solitude;
and perhaps without being enamored;
I go crazy, my love, I go crazy.

And my luck of the prized fruit
burns in your salacious and turbid hand
like a bad promise of venom;
though I want to kiss you kneeling,
When I go in your mouth, delayed
I go crazy, my love, I go crazy.

Our challenge is to write a new poem or prose poem in response to Carilda's words. Some examples of responses include affirming what the speaker said or using her title or line of verse as a jumping board for your own writing.   If you want to pen a love poem, that's fine with me too as the prompt is wide open.  I look forward to reading your work ~ Happy weekend to all ~ Grace (aka Heaven)

I hope you enjoy reading her poems ~ Happy weekend to all ~

Such passionate poetry as this must touch the heart of any reader. Thank you for bringing us another original artist as inspiration, Grace.

Wonderful and as usual challenging... love that intersection of love and politics..

Thank you, Grace. I am in awe of her sensual tone and the passion she emotes with a political edge.

Very warm writing, Grace--thanks for the intro. Will brood over it and see if anything happens.

Thank you for sharing this poet, Grace!! So inspiring. :)

I will continue with this series ~

Such a wonderful challenge Grace. I rushed my effort because I am leaving on a short trip in the morning. At another time I will revisit the challenge to see what I can create.

Wonderful poems, Grace. Mine is all over the place, but I enjoyed thinking about the challenge certainly. k.

Grace, thank you so much for introducing me to this wonderful poet!

What an amazing poet! I am spellbound.

i abandoned politics for something more earthy

…late to the party. Will be back to visit and comment.

Hey, I am/will be reading the late entries ~ I just noted that Gautami's link is not related to the prompt, so I will be deleting it from Mr. Linky ~

Also, just a courtesy reminder to visit or return the visits of your fellow poets ~ We all appreciate visits and comments ~

I enjoyed being introduced to her work. Thank you, Grace!

Welcome everyone ~ Thanks for participating ~