Collaboration with Peggy and Ella

Peggy and I share a love of the arts: poetry and photography. Peggy also paints and I used to. After seeing Peggy's work I am tempted to try again. I do mainly mixed media. For our challenge I took Peggy's art and one of mine and blurred the lines. We thought it would inspire an intriguing poetry. 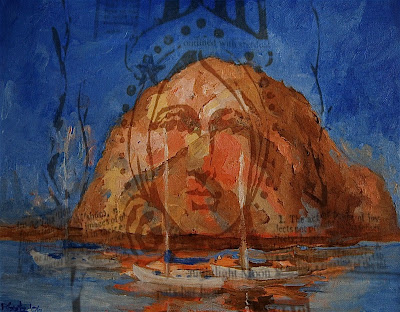 Peggy painted Morro Rock, which sits on the coast of Central California. It was formed 23 million years ago the hardened lava plug of a now long-gone volcano. It is one of a string of such plugs called the Nine Sisters. Several seas birds as well as peregrine falcons next on its rocky crown.  Visitors are not allowed to climb the rock, but two California Indian tribes are allowed to climb it for sacred ceremonies.  The rock has been a sacred place for these tribes since before the arrival of the Spanish.

My art represents a woman as a spiritual guide. So we combined the rock and Native American influence to bring our poem to life.


Spirit of the Rock

Fiery forces in for ancient youth
molten mountain mover
now cold and silent,
what eons' stories you could tell.

Eldest of nine sisters in a spirit chain,
Morro remembers
ceremony of our dance
stopped by Thunderbird.

This morning on Father's glassy bay
otters, sailboats, falcons cry and play.
On your starry crown I
see your wrinkles and crevices
seeming as if they have always been
and always will be.
Imagined By Peggy at 12:00 AM
Email ThisBlogThis!Share to TwitterShare to FacebookShare to Pinterest
Labels: Collaboration Peggy and Ella, Ella Wilson, In Tandem, Peggy Goetz

This is just amazing work! The whole concept behind the poem is fascinating - the combining of artworks to produce a picture which just vibrates with colour and abstract imagery. Your words take the idea to a different level. I just love the White Owl Woman, the personification of the sky and sun and the birth process described. I doubt I could ever visit this place without looking up to see the flaming beak of the winged serpent.

Thank you, Ella and Peggy for starting our July collaborations off with such fine poetry.

I love how you blurred the lines in the artwork, Ella. The two work together and become one. Enjoyed the poem greatly, Peggy and Ella. Lines blurred there too, as I can't tell who wrote what. Smiles!

You two obviously put a lot of work and heart into this and it shows. For some reason, the whole thing puts me in mind of Sherry Blue Sky. Anyway, great job, and happy 4th to all Toads in the USA.

The life throughout this poem intrigued me... especially the ending stanza... the "rock" keeps on giving, reflected in the glassy bay - always will be, indeed.

This is timeless ... which is why it resonates. I'm transported to another place. A mystical, spiritual, magical place. Beautiful work and as Mary says, I cannot tell which of you composed what.

What a rich experience this was, first the merged art which is just magnificent, and then the BEAUTIFUL poem, as Helen says, mystical. I LOVE White Owl Woman. I want to BE her! Love Fireblossom's comment. I totally resonate with this poem. Reminds me of Ella's and my collab. Wonderful, ladies!

Beautiful! I immediately thought of Sherry, too.

Thank you all so much for your comments. Ella and I worked on this is fits an starts--seemed like life got distracting a couple of times! It was though a pleasure to work with Ella! The idea of blending the art was hers and I was pleased with the results!

Hello everyone! Thank you so much~
I had fun blending our art to create an unique voice. Peggy is very talented~ Peggy shared the Native American influence of Morro Rock and I knew this was the perfect pairing of our art. White Owl Woman was inspired by a medicine woman and legend. Yes, part midwife, part sightseer and protector of nature. It could be our Sherry is related to her ;D Yes, Peggy and I found it a bit of a challenge at times-but we found
a way to blend our voices and our art! Thank you Peggy, I enjoyed the process and learning more about nature through your art!
Thanks everyone!!!! Happy 4th to those of you celebrating today~

I will be back tracking to read Mama Zen's prompted poems~ I have had company~ :D

What a beautiful concept to blend the art of both of you into one piece. The poem is so richly spiritual. It is amazing how two people wrote this with the same voice. Love it!!

Love the blending of art and words Peggy and Ella ~ Beautifully done and like Helen, I was transported to a magical place ~

Happy July 4th to all of you who celebrate it ~

I had a midwife, so much respect for them and a tale about native people, the mysticism and lore here. Lush, reverent. Appreciate it.

this is simply wonderful, Ella and Peggy... evoking such magnificence. i see my own mountains and sky in this, too. love it.

Ella and Peggy, HUZZAH! This is a brill collaboration. I know you both share those talents... image and words. Thank you for gracing us with your enmeshed wonders...

Ahhhh. Luscious myth making. You two combined art and then words to birth a poem that describes a similar joining and birthing. I'm glad to drop by the garden for this powerful creation. and hope to visit the site for real one day. Bravo, Peggy and Ella!

It feels so folklore-y and full of nature's voice fused with you two!! I love how this started with the merging of both of your art styles!! Excellent work ladies...thank you!!

Thank you everyone! It was fun and I too hope to see Morro Rock someday
:D

You are all so kind~

Better late than never -- I love the artwork and so enjoyed reading the poem. I did try to figure out who wrote which stanzas, and failed. A perfect collaboration.
K

Thank you Kay! I have a poetry blender ;D

Just coming by for a wrap up comment and thank you for all your appreciative comments. Ella does have poetry blender and even I have forgotten exactly what each of us wrote! I hope you all will volunteer next time to do a collaboration. It was fun and I really enjoyed working with Ella. There are so many ways to do a collaboration and I am sure you all could participate. So keep and eye open for Kerry next announcement of collaboration sign-ups.