Creatures of the night

Hello amphibian friends, now when our pond might be covered with a thin layer of ice, and daylight is scarce as candy in a grave we approach Halloween and All Saint Nights. Now it's time to write about the dead and undead. I don't mean the cuteness of a trick or treat, but the real fear a hides beneath your bed. Bring out the beasts at night and make it hard for me to sleep. It could be vampires, ghosts or werewolves. It can be zombies or it can be just the scene of a graveyard at night. Imagine that trees are claws or the wind itself a demon’s breath.

The Vampire Bride [I am come-I am come!]

“I am come—I am come! once again from the tomb,    In return for the ring which you gave; That I am thine, and that thou art mine,    This nuptial pledge receive.”He lay like a corse ‘neath the Demon’s force,    And she wrapp’d him in a shround;And she fixed her teeth his heart beneath,    And she drank of the warm life-blood!And ever and anon murmur’d the lips of stone,    “Soft and warm is this couch of thine, Thou’lt to-morrow be laid on a colder bed—    Albert! that bed will be mine!”

If you want an extra challenge use the beasts as metaphor. A vampire might be illicit love, the ghost your conscious like old Marlow was for Scrooge or the werewolf stand for loneliness. 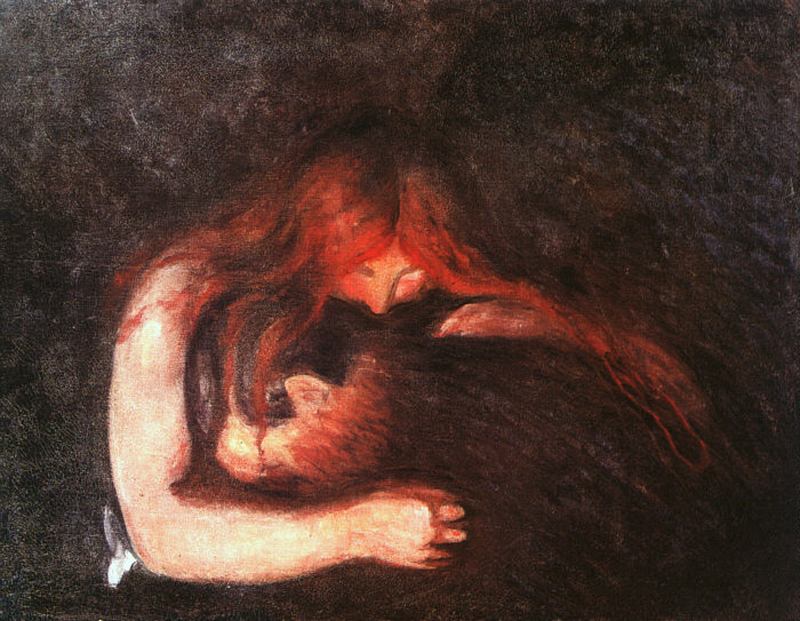 The Vampire by Edvard Munch

You can also write from the beast’s persona. Walk with the zombies, stalk with the vampire or howl with the werewolf. Watch the corpse bride and delight in decomposing flesh.

Link up your poem below and have fun choosing tricks instead of treats.

Celebrating the Season - Dreaming with Stacie

Hello Toads! I hope that October has found you well and enjoying the season. It finally feels like Autumn where I live, & with October's end fast approaching I find much for poetic inspiration. The changing colors, the chill in the air, the pumpkins, the apples, the festivals & the music -- Autumn is so very alive with joy & excitement. It is a season of endings, yes, but also beginnings (at school, of holidays, of events).

Here are a few of my Autumn photos - Can you feel the joy in them?

I know it is likely that not all of you celebrate Halloween, and indeed some of you are experiencing a completely different season right now. Therefore, I want to invite you to write a poem of any season -- whether it be the one you are in, or your favorite one that you may miss. The only parameter I put on it is that it must be a celebration of that season -- make us see, feel, hear & taste the joy in it. In other words, write with your senses as well as your heart. If that takes you to a spooky Halloween-town, or a serene Spring lake & fields of tulips -- so be it! Just take us there & have some fun with it!

For your viewing pleasure, and because Halloween is nearly upon us where I live -- here is "This is Halloween" from The Nightmare Before Christmas. I have a special affinity for this one, as I once performed in a musical version of it -- and it was the most delicious fun!

Imagined By Stacie Eirich at 12:00 PM 11 comments:
Email ThisBlogThis!Share to TwitterShare to FacebookShare to Pinterest
Labels: Dreaming with Stacie

Greetings to all poets and friends. I am so pleased to know that you have dropped in today to participate in our Open Link. It is your support and interest which has kept this site going strong for the last six years. This weekly post offers you the opportunity to share a poem of your choice, with the advantage of hanging out with some of the finest poets of the blogosphere.

Happy Tuesday to all!

Imagined By Kerry O'Connor at 12:00 AM 10 comments:
Email ThisBlogThis!Share to TwitterShare to FacebookShare to Pinterest
Labels: The Tuesday Platform

FASHION ME YOUR WORDS ~ a query

Hi Toads, FASHION ME YOUR WORDS ~ a query in the style of Emily’s ‘Answer July’

Fashion me a poem, using not more than 100 words, in the style of Emily’s ‘Answer July’, have fun

AND while you are at it enjoy my video of choice


Remember!!! this is a fun project

Kerry Says ~ It's Blowing in the Wind

On Thursday, October 13, Bob Dylan became the first song-writer to be awarded the Nobel Prize for Literature, ‘having created new poetic expressions within the great American song tradition.’ Dylan is the only artist to have won a Grammy, Golden Globe, Pulitzer, Polar, Oscar and the Nobel Prize.

For more than six decades he has remained a mythical force in music, his gravelly voice and poetic lyrics musing over war, heartbreak, betrayal, death and moral faithlessness in songs that brought beauty to life’s greatest tragedies. Read more HERE.


Blowin' in the Wind

Our Challenge today is to select a line or lines from the work of Bob Dylan, and use it as the spring-board for a poem. The words themselves do not have to be included in the body of the poem, but merely as a reference, but I leave the creative decision-making up to each writer.
For the remainder of the words to Blowin' in the Wind and the lyrics to other songs, click HERE.

The following clip features a 'Top Ten' of Dylan's songs. 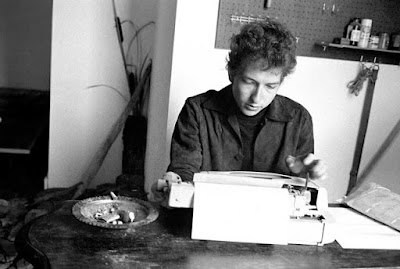 Is there something
I can send you
from across the sea?


Welcome to the Tuesday Platform, the weekly open stage for sharing poems in the Imaginary Garden. Please link up a poem, old or new, and visit the offerings of our fellow writers.

Imagined By Marian at 12:00 AM 12 comments:
Email ThisBlogThis!Share to TwitterShare to FacebookShare to Pinterest
Labels: The Tuesday Platform

October in the Chair

[November] was pale and thin lipped. He helped October out of the wooden chair. “I like your stories. Mine are always too dark.”

“I don’t think so,” said October. “It’s just that your nights are longer and you aren’t as warm.”

From“October in the Chair,” in Fragile Things, by Neil Gaiman


I adore April and a love June, but October is my favorite month. I love its colors, its scents, the taste of its treats, the mystery that fall with its autumnal leaves… I’ve imagined October as a woman who delights in skirts and knee-high boots, as a man wearing a hat that accentuates the mischief sparkling his eyes, as a story under a cloak made of reds and oranges and yellows that speak of Nature readying for winter’s cold.

For this Weekend Mini-Challenge, I invite you to turn October into a poem. Is your October a girl? Does he smile like a boy? Is October a feeling that kisses the back of your neck… and reminds you of your dead? What does October look like to you? Show me in poetry.

Please craft a new poem (preferably short *cough, cough, cough*), and feed Mr. Linky (below) with the direct link to your piece. Then visit other Toads… and see the faces of their Octobers. 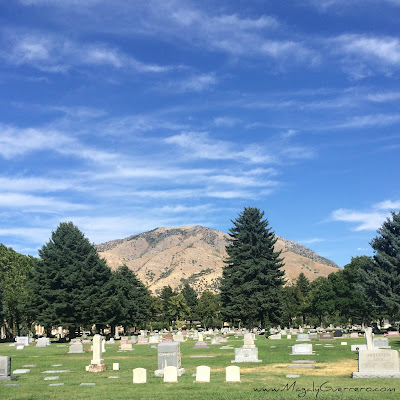 Hello, it's Hannah here bringing you inspiration from the local coffee house!

So today I'd like to invite you to find a spark for your muse from the BrainyQuote site. Explore topics, authors, images...and allow your choice to transform into words.

Here's the "Quote of the Day."

So, normally I write and post from home but I'm not "wired up" yet in our new woodsy home...that being said...I will be back to read each and every one that posts for this challenge but it won't be as quick as usual, apologies and I know that you'll support each other in the in between time so gratitude to you all as well.

Please offer new poetry for this challenge and feel free to link as many as you like!

Thank you!
Imagined By Hannah at 12:00 AM 12 comments:
Email ThisBlogThis!Share to TwitterShare to FacebookShare to Pinterest
Labels: Transforming Fridays with Hannah

Welcome to the Imaginary Garden...

Frau Doktor,
Mama Brundig,
take out your contacts,
remove your wig.
I write for you.
I entertain.
But frogs come out
of the sky like rain.

My guilts are what
we catalogue.
I’ll take a knife
and chop up frog...


Greetings to all poets and friends! The month of October seems to invite a touch of the macabre - I could not resist sharing this snippet of Sexton's froggy tale.  It is poet's choice in the garden today, with the emphasis on sharing and caring. So please link up and take a while to enjoy the work of fellow poets.

Imagined By Kerry O'Connor at 12:00 AM 13 comments:
Email ThisBlogThis!Share to TwitterShare to FacebookShare to Pinterest
Labels: The Tuesday Platform 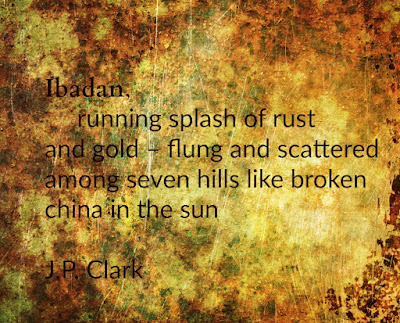 Ibadan
(A city in South-Western Nigeria)

Greetings to all!
Today is the day we put the "mini' back into the Sunday Mini-Challenge, and return to the option of form poetry. The object of this challenge is to write a poem in no more than 10 lines (but you may write in fewer than 10 lines all the way down to a single American sentence). Choose your own form or write in free verse, if preferred.

This weekend, our frame of reference is 'A splash of rust and gold...' quoted from John Pepper Clark's poem, Ibadan. Follow THIS LINK to AllPoetry.com where more of his work is available to read. I look forward to reading a number of short poems, from Saturday through to Monday. The link does not expire, so please feel free to write more than one poem, and a return to comment on poems linked later would be appreciated. 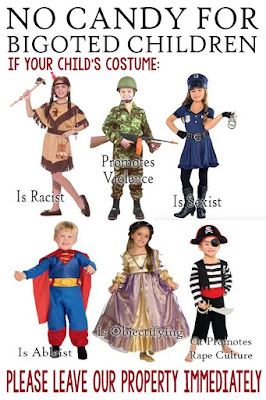 Pull up some keyboard and grab yourself a pumpkin spice latte; let's talk about Halloween costumes. Do you dress up, or do you leave it to the kids?  If you do dress up, are you an elaborate planner, or do you scrounge through your closet for something at the last minute?  Do you go sexy or scary? Stick with the classics or dive into the trendy? Tell me about your dress up plans (or lack thereof) - in 65 words or less.

Note:  Think I'm jumping the gun on the costume thing a bit?  Nah, I've been working on Baby Puppy's cosplay since JULY!


The field of cornflower yellow is a scarf at the neck of the copper sunburned woman,
the mother of the year, the taker of seeds.


The northwest wind comes and the yellow is torn full of holes, new beautiful things
come in the first spit of snow on the northwest wind, and the old things go,
not one lasts.

Imagined By Marian at 12:00 AM 15 comments:
Email ThisBlogThis!Share to TwitterShare to FacebookShare to Pinterest
Labels: The Tuesday Platform

Greetings to all poets and friends!
It is time for the Flash 55 Challenge in the month of September. The rules of this prompt have not changed: Write a piece of poetry or prose on a subject of your choice in precisely 55 WORDS.

I was recently perusing the Bored Panda website, when I came across the post, 15+ of the most Amazing Examples of Japanese Architecture. I was transfixed by the ergonomic and/or economic use of space.

Thus, today's optional extra bit of inspiration for your 55-worder is the concept of SPACE. I encourage you to click on the link below the picture to see more examples of the way space has been utilized in creative both living and work places, but the prompt is open to your own interpretation.

Please Note: From next month, Flash 55 PLUS! will alternate with Play It Again, Toads!