“Steampunk is...a joyous fantasy of the past, allowing us to revel in a nostalgia for what never was. It is a literary playground for adventure, spectacle, drama, escapism and exploration. But most of all it is fun!” George Mann

For this challenge, we will examine the fascinating world of Steampunk.  Wikipedia defines the term as:

"A sub-genre of fantasy and speculative fiction that came into prominence in the 1980s and early 1990s. The term denotes works set in an era or world where steam power is still widely used—usually the 19th century, and often set in Victorian era England—but with prominent elements of either science fiction or fantasy, such as fictional technological inventions like those found in the works of H. G. Wells and Jules Verne, or real technological developments like the computer occurring at an earlier date. Other examples of steampunk contain alternate history-style presentations of "the path not taken" of such technology as dirigibles or analog computers; these frequently are presented in an idealized light, or a presumption of functionality."


Steampunk is nothing new and has been translated into art, novels, movies, jewelery, design, sculpture and computer games. Within this genre, you may expect to see fictional inventions, people dressed in pseudo-Victorian fashion and current day technologies reinvented to look like a 19th century design.

In researching the language of Steampunk, I found the following bit of advice for writers:
In general, steampunk uses extremely ornate, superfluous words in place of simple nouns and verbs that describe an item. For example, a washing machine might have a Steampunk name as "Miss Pennyfarthing's Hydro-electric Frock Osculating Mechanism." The longer, more ornate and weirder the name is, the more steampunk it is.
Steampunk scientists or inventors usually add the title of "Doctor" or "Professor" to precede their name, which gives them an air of authority on the topics they extemporize upon. (ehow.com) 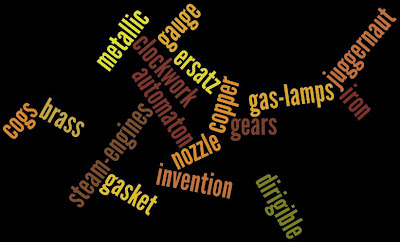 There are many amazing images to be found while conducting a 'Steampunk' search.  I have been lost for days in this alternate world, which I hope others will find just as inspiring.


My challenge for the Reinvented Amphibians of the Hypothetical Arboretum is to join the League of Extraordinary Versifiers...


... and discover the land of tomorrow that never was.
Imagined By Kerry O'Connor at 12:01 AM
Email ThisBlogThis!Share to TwitterShare to FacebookShare to Pinterest
Labels: Kerry's Challenge

This is a great prompt Kerry. I love steampunk, ever since playing Arcanum years ago(a steampunk roleplaying computer game) I will have to get the creative juices flowing on this one.

I think this may be more difficult than I first thought... Trying to find the angle I need to get an idea off the ground, and I'm never at my peak, mid-week afternoons.

Hi kids, this popped into my head - it isnt fantasy, but we might wish it was!

I've got a twofer--the first is original writing for the prompt, but it's prose (I know, weird!) so I am also posting an old poem that I've always thought of as steampunk, for those who'd rather have poetry. Loved this one Kerry, Thanks!

I thought this prompt would lend itself to prose - so anyone else who wants to take that route is more than welcome. Thanks for the extra poem, Hedge.

I really liked this prompt! Some of my latest mixed media work is steampunkish --- so much fun. There's even a Steampunk channel on Pandora Internet Radio. The music clicks and dings and spurts and makes the neatest sounds.

hmmmmm. this might be a hard one for the barely-here amongst us. i mean, for me. interesting!

Mine is fantasy, but not in the lushness of the romantic Gothic world of Poe and scifi. I always did think of the little childhood fantasy part as if it were a machine we hadn't rediscovered yet. I tried to put in the word "digital," but it just didn't fit--unless this is only Part I.

I am actually surprised by how few posted today--but I bet there are lots more coming in to pick up the decadence and surprise suggested.

Wow, this is far too ambitious for me! But I think the genre is quite interesting. What a great prompt.

I'm with Marian in the "barely here" category. :)

Such good fun!! Always fun to stretch the borders of my imagination a little. Thank you for this great posting and prompt Kenia!! Smiles!

I meant to say Kerry, thank you Kerry for this prompt!! :)!

okay, okay, i liked it after all!!!! hahahahah! thanks, kerry xo

Truly, TRULY, fascinating prompt. I am so busy this week with a few things that doesn't allow me much spare time... But I plan on coming back next week and tackling this one especially - it is SO interesting! Thanks.

A picture I found during my research into the genre has stuck with me all day, so I undertook a little parody of an old classic.

Hmmm.. seems like Mr Linky is not capturing my second link, so I'm going to add it here until I figure out what the problem is.

What a wonder filled challenge~ I can't wait to read all of these...
Great idea, love it!

That's my style! I've left a link to Media Tala because that is more steampunk than my veronicaroth.com site. It takes me ages to build and photograph the works but I love it; hope it builds popularity.

Veronica, I tried to leave a comment on your site but I'm not sure it worked. When I first read it, I didn't know the artwork was your own. I'm so impressed with your steampunk creations.

ohh how intriguing! I will have to add this to my backlog of prompts! steam... victorians... fantasy... iron... ships - it's spinning...