The Horses, the Sorrow,
the Umbilicus

Horses were turned loose in the child's sorrow.
They galloped bare-boned, tore up her imagination's
pasture. Simple things became surreal, malevolent -
a shoelace, a windup toy, the cross of a t
or the lost dot in her mother's eye. Continents of grief
to traverse. She hadn't yet seen the tidily grassed graves
at Arras or families rounded up in town squares, poisoned
blankets covering bodies in Haida Gwaii. Sometimes
under the night sky she mounted a mare and rode
into morning, through sunflowered bonfires, through
sermons and eulogies, past incense and teargas
till she reached the saltwater tide. She never knew
if she had swallowed sadness through her umbilicus,
joined still to her mother's placental algebra.
The girl sat awhile, gazing out over the waves
to the rapidly rising sun, then dismounted,
looking to her left, looking to her right - 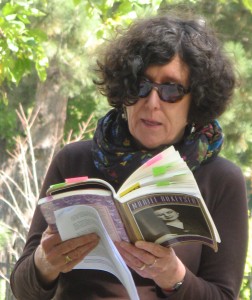 [Note: "The horses were turned loose in the child's sorrow" is the first line of Carolyn Forche' 's poem, "Sequestered Writing",  from Blue Hour (New York: Harper Collins, 2003; "Looking to the left, looking to the right. She-" is the last line of Gail Scott's "Heroine" (Toronto: Coach House, 1987).]

This poem really speaks to me, the whole idea of horses being turned loose in a child's sorrow - and the recognition that children indeed do have deep sorrows, that may be unacknowledged by the adults in their lives.

Maureen is an award-winning Canadian poet, editor and educator, living in Toronto, who believes good art wakes us up, opens us up, and makes us more aware. "My poetry," she says, "is always an attempt to go deeper, mostly into commonplace experiences....to find the still moment when a connection can be made, hopefully with poetic grace." I think the poet achieves this remarkably well.

Maureen teaches personal narrative in creative writing at the University of Toronto's School of Continuing Studies. Her website can be found here.

I wanted to share this poem with you because it is amazing, but also because it is a fine example of how a beautiful new poem can be created by piggybacking off a line of someone else's poem, as this one did. Maureen's first line came from one poet's poem, and her last line from another's.

I thought this might be a fun idea for a prompt. For your challenge: Choose one line from this poem, or another poem of your choice. Make this line the first line of your new poem. Attribute the line borrowed to the appropriate source. Have fun!

Hi kids, ha, it isnt even midnight in my neck of the woods. I am looking forward to reading your piggyback poems.

Well well well, it's just gone half past 1 a.m. ... here, so much further east .... and this is a wonderfully rich poem, and a great prompt. How often we are inspired by the words of others ~
great idea for a prompt Sherry ...
thank you :)

Good morning, Sherry! It's just coming up to 7.30 am and it's raining! Luna is somewhere in the garden and Moho is sitting in the window hoping the rain will stop soon - she hates getting wet. I love the poem you have shared, Sherry. I don't know many Canadian poets so each one you introduce to me is brand new and fresh.

Thank you for sharing this amazing poem, Sherry. As I read, I felt doors opening wide inside my mind.. not often that happens.

I am so happy to pass on this introduction to you. Maureen is new to me, too. A Tofino poet-friend made me aware of her, and this wonderful poem.

And to think of all those others who will never have a chance for a life like we can lead. Terrible, terrible.
But an appropriate and nice revealing poem. Thank you. Sherry, for choosing it as an illustration for your prompt. I am using a line from Hynes here to start my ditty off.
..

Sorry friend. I don't do erasure poems, "found" poems, piggyback, any of that. I know I would cheerfully strangle anyone who "borrowed" any of my lines, and I assume other poets feel the same. It's Blurred Lines. I won't do it.

Oh that is a good point, Shay. I hadn't thought of it that way.

Maybe it would be okay to just use a line or phrase as inspiration, not actually use it in your poem. Or make a word list from her poem.

Or you could take the word "umbilicus" and find words inside it to jumpstart you.

I also like to take one line from a poem I wrote years ago and travel poetically in a new direction! Self plagiarism.

I think one line (or partial) with attribution is fine... especially if the poem takes a totally different direction or vision. I also think it highlights and brings to surface a new poet. We all know poetry is NOT widely read, and I am introduced to a new poet which is often nice. Poets often like to use quotes and take off from there so this really isn't much different. Of course, if we know a poet HATES having lines "lifted" then I wouldn't go there. But I think I'd find it a bit of a compliment as long as my name (and original poem) was always referenced with said poem.

Good ideas, all. I find all of them interesting as a way to jumpstart my tired, aging muse. Lol. But i definitely am now aware that not all poets would appreciate this and that is good to be mindful of.

Helen, i often recycle some of my old lines too. In my case because my old lines are better than my new lines, lol.

Sherry, do you mind if i use vintage's list?

I have assumed it's okay. If not, I understand.

I LOVE that you used vintages' list and am thrilled beyond measure at the marvelous result! Yay!

That is such a lovely way of seeking inspiration to write. I've seen many poets borrow lines from others while citing the original of course.
I personally found it pretty frustrating because once I began with the borrowed line, I ended up being cautionary in my approach and started emulating the original poet, drawing images and metaphors along the same lines. It was after giving up, editing it, giving up again and then restructuring it that I ended up with the current form. It is far from finished, but I thought of sharing it eventually.
Thanks for the prompt, Sherry.
-HA

Thanks for writing to it, HA. I know what you mean about taking on the tone of the original poet. I find myself doing that sometimes too. But I love what you did with your poem. You produced an admirable piece of writing. Yay!

I was out all day yesterday in the pouring rain (sigh of relief for garden and people alike) but could not resist this prompt - many of the great poets utilise another's lines for inspiration - Eliot for example has so many allusions his poems need referencing. Thank you for sharing this poet with us Sherry though I have chose to go with Sylvia Plath
https://poetrypix.com/2018/08/10/red-blooms/

Oh, I envy you and the trees your rain. Thanks for writing, Laura. I LOVE your poem!

I am very late and behind the times, friends. I have just set up an Instagram page, to share some of my ink pen and notebook poems.

Thanks for a marvelous prompt Sherry!

Thanks for writing to the prompt, friends. I enjoyed your poems very much, inhaling each one with delight.

I personally do not like lifting (as in stealing) lines from other poets. it is their line, their inspiration. I like using a poem for inspiration just as some of you like those music videos for inspiration. I know I would be upset if someone "lifted" a poem from one of my poems. It is just me and my sense of honor. Sherry dear, I know you did not mean it as stealing but as a way of inspiration. I think providing a word list from a poem is an excellent idea. I would never chastise you for anything you do. But...I lifted a line from an old obscure poem by T.S. Eliot and still felt like a thief. Hence my quote from Anthony Bourdain. I know you all think it is fine. I do not. Or use use the line as quote at the beginning of the poem. I know I am weird and in this day of mixed values, I can see how some people would use lines. But again, I do not. Thank you sherry for your Prompt and the time you spent on this. You know I love you dearly.

No worries, Toni. You must do what feels right to you. And definitely the feedback has made me think quite differently about this type of prompt. We live and learn, as long as we stay open. Smiles.

Thank you for the instructions. I'm learning and this was much appreciated.