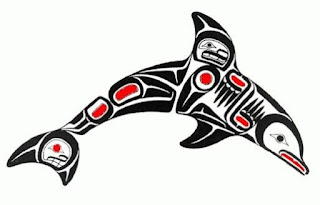 Does your poetic other root in forest, sky or booming wave? Do your verses run with the wolves, ride a dolphin's back, birth with the sun, batten on winds, limn dark cracks, take wing in moonlight? If so, who are these beasties which make your poems dance?

What tops your totem pole? How literal, how literate does that configuration of myth and poetry stand in your work—close, far? Evolving, inherent? Lost? Reclaimed?

Today it might be fun to turn over the lily pads of our wet Garden, to discover the totems inscribed below.

Atop my father's old Irish crest (the name traces to the 2d century BC) a naked man rides a dolphin. There's a deep connection between humans and dolphins. Eros, the first god, rides on the back of a dolphin. Apollo guides his priests across the sea to the island of Delphi in the form of one. And the first Greek singer Arion was thrown into the sea by pirates, only to be rescued and carried to shore on the back of a dolphin which had been entranced by his singing.  (Also on my father's crest are three drinking cups, apparently a toast to the triple horn of song; up until the Normans left Ireland, his family entertained.) There are legends where dolphins carry the dead safely to shores human and divine. First and last and ever is a dolphin trope: No wonder I always drowned, falling in love.

Or is that water-beast a horse?  The sea-god Manannan's chariot is drawn by Enbarr, the wave-horse whose mane is the froth of the sea; his horse could traverse over sea and land both. Manannan in Christian lore became Michael, the ferryman of souls to Heaven. The isle of Man, sacred to Manannan, has a three-footed wheel as its emblem, the churning of a chariot with the wallop of a gallop. Mercea Eliade writes of horse metaphors in his book on shamanism:

Pre-eminently the funerary animal and psychopomp, the 'horse" is employed by the shaman, in various contexts, as a means of achieving ecstasy, that is, the "coming out of oneself" that makes the mystical journey possible ... The "horse" enables the shaman to fly through the air, to reach the heavens. the dominant aspect of the mythology of the horse is not infernal but funerary; the horse is a mythical image of death and hence is incorporated into the ideologies and techniques of ecstasy. The horse carries the deceased into the beyond; it produced the "break-through in plane," the passage from this world to other world. (Shamanism: Archaic Techniques of Ecstasy, 467)

How about a seal? My avatar's surname MacOdrum is taken from a clan in Northern Uist, a Hebrides island off Scotland, said to have descended from seals. (A number of Irish clans claim to have animal ancestors). And the 15th-century Irish Book of Lismore records this story about my avatar's christian name: While on his way to visit the high king at Tara, St. Brendan transformed 50 seals from the sea into horses and gave them to the king in exchange for the freedom of a nobleman, whom the king had been holding prisoner. Oddly, Brendan guaranteed the horses for 15 months; and sure enough, one day the riders are putting whips to their horses when both riders and mounts are turned back into seals. Hunting seals for the Irish was always an itchy enterprise, since seals look back from the water with almost-human eyes, and their barking from the rocks just off shore is likened to singing.

Wash me blue, but what about your yearnings and burnings and learnings? Feathered or furred? Hooved or finned? Winged or purring? Canaries or canines? Write about your animal familiars and where they lead or take you. What animal mask(s) choose to wear you? How would you carve your totem song?''

A caveat to remember the age we live in and the strained relations the human community has imposed on the rest of Gaia's tribes. Privileging one species is a dangerous indulgence, and anthropormorphising an animal for shared human tendencies robs the entangled ecosystem we live in of balance and equity. I love our cats so, both the indoor ones we bond closely with and the strays we also feed;  but the bird population is savaged by predatory feral cats. Is the extinction of one comparable on the balance scales as my love of the other? And who says Grumpy Cat is really grumpy and not trapped in our mask for displeasure?

The online world grieved when for two weeks an orca mother dragged her dead calf around Puget Sound. The calf was extremely malnourished and didn't have enough blubber to stay afloat. We were right to grieve the sight, and there is ample evidence that the killer whale was experience a deep kin of grief: Yet we would err greatly (and typically) to focus on that event without acknowledging our conditions which caused it: human coastal development, industrial marine noise, and overfishing of Chinook salmon—orcas' primary food supply—and then stuffing the survivors with all sorts of pollution and waste, from lead to flame retardants to Thorazine. Riding the mythic orca is shamanic, but saddling so with acknowledging guilt for the extinction of that species and marine environment is the a dangerously unethical poetic appropriation. As masters of the disastering Anthropocene, our guilt is the sum of a sixth extinction.  The beasts painted in Paleolithic caves were grandly beautiful, worthy of aesthetic awe: But they were also human prey, and their creative regeneration fulfilled on one plane our hunkering for a good rib roast. Stacking animal heads in a totem is ever a dubious enterprise. 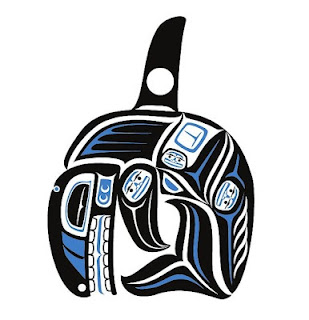 A cool prompt, Brendan. I wrote about real, rather than spiritual totems. Hope that is all right.

The crow is my totem animal. It represents truth.

interesting prompt Brendan - thanks for hosting.

I'm not sure if I'll write to it, for different reasons. Maybe I'll pull something from a bit of a side-off ... I'll sit with it and see;

anyhow, happy weekend to one and all ...

Love it. Brendan. If I don't compromise because of my light schedule, I'll reconstruct my pole in your way, one not yet recorded for posterity. Here.
Thank you.
..

Oh, almost missed this wonderful prompt, having been away all Saturday. I'll try and write something a little later today. Meanwhile the poems already linked are thrilling.

A good one, Brendan. I went in the direction of the Bible on this one.

Thanks - I pondered long and hard and had to use a bit of material from two old poems ...

A great prompt, Brendan! I wanted to spend more time on this one as it is a topic close to my heart, but I'm not feeling myself at the moment, I had a rough night and I'm going out to search for dragonflies.

Thanks for the inspiring post, Brendan. I presented from the viewpoint of the totem.

Sorry I'm new to blogging and I didn't it linked to the specific post this time. White-winged Dove. Apologies.