Out of Standard with Izy 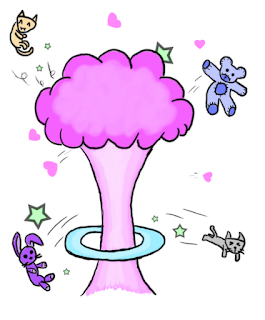 Welcome to the third edition of Out of Standard.  Once a month I will set before you a challenge to defy the conventions of a particular theme.  You will be called upon to find new places in the everyday, but there is a twist: in order to complete each challenge, you will also be asked to share something about yourself with the IGWRT community.   Special thanks to Sherry Blue Sky who suggested this theme would make a great general prompt.    So with thanks given, I proudly present....

As long as civilization has been in existence, there have been those Doomsayers   who foretell of an impending end.  Some declarations are steeped in mythology, such as the Norse Ragnarök.  Others are based on scientific calculations, see Heat Death of the Universe.  Neither seem like very much fun.

Some hold to their own personal theories and lie in wait for their homegrown prophecies to bubble to the surface.  The National Geographic Channel has aired two seasons of their show Doomsday Preppers about people who are preparing for way beyond realistic doomsday scenarios. They spend most of their waking hours canning food, building bunkers out of metal shipping containers (surprising cheap and cozy), and practicing their marksmanship.  Again, no fun.  No one is installing their own doomsday disco or stockpiling giant bouncy castles for end time picnics.

While doomsday is inevitable (everything that begins must end), it’s rather a downer of a topic.

Toads, I call upon you to cast aside the doom and the gloom.  I ask that you imagine yourself a doomsday and revel in the end times.  Come to peace with the chaotic, inevitable nature of our solar system and write a doomsday poem which has a happy ending.  Like every challenge, your poem must by newly written for this challenge and not one previously written which conveniently fits the theme.

Go now, my lovelies, and bring back something unexpected, something out of the Doomsday Standard.

Imagined By Isadora Gruye at 12:00 AM
Email ThisBlogThis!Share to TwitterShare to FacebookShare to Pinterest
Labels: embrace your doomsday., Izy's Challenge, Out of Standard

Toads, please forgive my lack of visits lately. I will be around this weekend, and will try to come see you all!

Love this prompt Izy, thank you!

Thanks for this unexpected prompt, which yielded a completely unexpected writing. Enjoy!

I do love a dystopian landscape.

What a totally cool prompt, Izy, and the twist you put on it will make this a lot of fun. I also apologize for being so behind, kids......was away and on return and sucked back into the whole Work/No Time thing. Sigh. I'll catch up at some point.

Wonderful wonderful prompt--and exploding atomic teddy bear lead-in pic--I must brood on this and get back, though after just reading Shay's, no doubt hammered out at dawn's crack this morning before work(!!) I am a bit humbled at tackling it. Thanks, Izy.

Oh, a very difficult one for me, Izy. I can face the idea of an end for myownself, because I've lived a long and eventful life, but I ache when I think of the children I love so much: my nieces, nephews, grandnieces and grandnephews, my husband's grandchildren, and the grandchildren of my close friends.
Just a wimp, I guess, but I'll try to think of something to write.
K

I let myself off easy after reading Fireblossom's poem and weeping at everything from the orange bus on down. Bless her! I can only take so much catharsis in one day. Izy, you are a dangerous and worthy challenger!

Thanks to all who participated, and thanks to those whose responses will trickle in later. You all brought so much to the prompt. I found this challenge near impossible, and yet you all triumphed.....viva la

I'm late, but I made it. When I saw the challenge Izy I had not clue as what to write. I finally got something written and I had a lot of fun with it.

I also went for the lighter side of apocalypse--funny that contemplating total destruction of life as we know it made me finally write something cheery--oh well--I had fun with it, anyway. It's late late late here so will be by to read tomorrow.

Wowzers! This is quite a challenge... it may take me a few days - if I can be creative in this vein at all! I will certainly be back later to read all the entries.

love this! sorry, Izy, i was out of service yesterday AT THE BEACH but now am back and this is a topic i've flirted with a bunch of times, so it feels like fun. i'll work on it and come back, even if i'm late :)

Hi Izzy - managed to squeeze in a rather silly one! Hope it doesn't make anyone who is phobic, sick! Or even the non-phobic! k.

Finally made it in on this one...ended up with another Missive from the Lair!