Hello everyone. October is winding down and I will avoid the Halloween theme. Instead I have chosen Nightingale. First let me share a little about the bird of night. 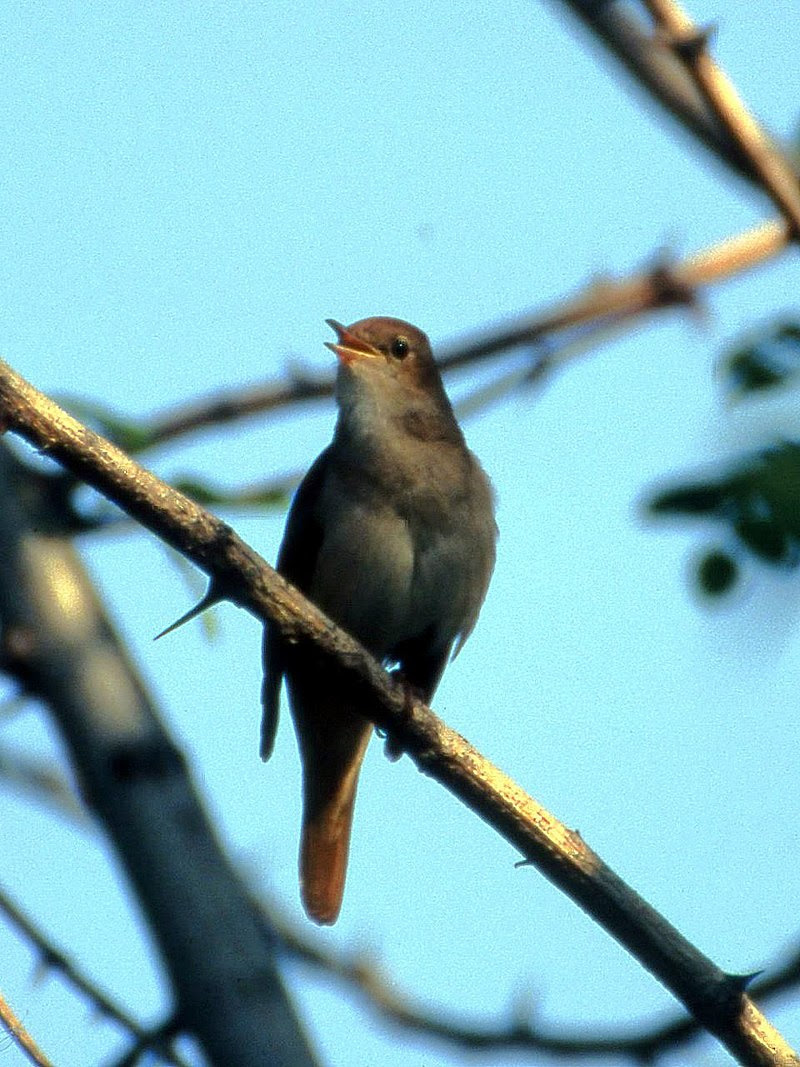 Common nightingales are so named because they frequently sing at night as well as during the day. The name has been used for more than 1,000 years, being highly recognizable even in its Anglo-Saxon form – 'nightingale'. It means 'night songstress'. Early writers assumed the female sang when it is in fact the male. The song is loud, with an impressive range of whistles, trills and gurgles. Its song is particularly noticeable at night because few other birds are singing. This is why its name includes "night" in several languages. Only unpaired males sing regularly at night, and nocturnal song is likely to serve to attract a mate. Singing at dawn, during the hour before sunrise, is assumed to be important in defending the bird's territory. Nightingales sing even more loudly in urban or near-urban environments, in order to overcome the background noise. The most characteristic feature of the song is a loud whistling crescendo, absent from the song of thrush nightingale. It has a frog-like alarm call. Wikipedia

Here are a few poems about the nightingale.

Sonnet To The Nightingale ~ John Milton

O NIGHTINGALE that on yon blooming spray
Warblest at eve, when all the woods are still,
While the jolly Hours lead on propitious May.

Up this green woodland-ride let’s softly rove,
And list the nightingale - she dwells just here.
Hush ! let the wood-gate softly clap, for fear
The noise might drive her from her home of love

My heart aches, and a drowsy numbness pains
My sense, as though of hemlock I had drunk,
Or emptied some dull opiate to the drains
One minute past, and Lethe-wards had sunk:
'Tis not through envy of thy happy lot,
But being too happy in thine happiness,—
That thou, light-winged Dryad of the trees
In some melodious plot
Of beechen green, and shadows numberless,
Singest of summer in full-throated ease.

Percy Bysshe Shelley referred to poets as nightingales:
“A poet is a nightingale who sits in darkness and sings to cheer its own solitude with sweet sounds.”

Even today you can see how the bird inspires music as Demi Lovato sings her Nightingale song.

What is your nightingale song? Please write a new poem for the challenge; add it to Mr. Linky and  then visit your fellow poets to read what poetry the winged bird inspired them to write.

Imagined By Susie Clevenger at 12:00 AM
Email ThisBlogThis!Share to TwitterShare to FacebookShare to Pinterest
Labels: nightingale, song, Susie Clevenger, Wednesday Bits Of Inspiration

Love the information on the Nightingale. Right away I thought of the song by Nora Jones:

O! I thought of TOAD THE WET SPROCKET's "Nightingale Song," the chorus of which I put with my poem. A link to Philomela is under the etching.
Thanks, Susie!

Love the direction you gave us, Susie. I have been writing to the themes of the season all month, and I'm afraid I didn't entirely get away from it, but at least I *think* I have avoided the creepy. ;_)

This is a superb prompt, Susie. I do hope to be able to write an appropriate response, but these days I seem to be singing the same old tune...snowed under by work. I shall certainly be turning my thoughts to the idea though and may have something by the weekend.

Adore this. Love birds. I may be late, but I will be writing something. Thank you.

@Lisa, what a beautiful song. I hadn't heard it before. Thanks for sharing it.

@Susan. so thankful it recalled the song for you!!

@hedgewitch, LOL Inspiration takes you where it takes you, whether darkness or light.

@Kerry, So sorry work is drowning you. I certainly understand how that can happen!!

@Margaret, thank you. I am looking forward to what you write.

I loved this - interesting facts, a beautiful song and the chance to think about my interpretation of the prompt.

A perfect bit of inspiration.

@ Cosmos Cami Thanks so much

A teeny weeny reference to "nightingale"… hope that is enough to qualify :)

@Of course it does Margaret.

@Lolamouse So glad to see you here.

@manicddaily It's never too late :)

This prompt struck me hard... and it took me a while to regain my senses and post something about it.