Hi everyone!  For our featured poet series, it is my pleasure to introduce you to the poetry of Marilyn Chin. 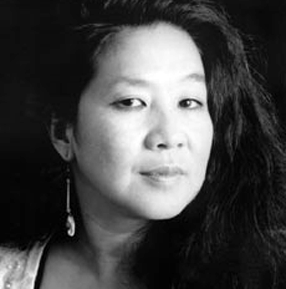 She was born in Hong Kong but grew up in Oregon, in the U.S. Northwest. A noted anthologist, translator and educator as well as a poet and novelist, Chin’s work distills her experiences both as an Asian American and as a politically attuned woman. Her poetry is noted for its direct and often confrontational attitude. “The pains of cultural assimilation infuse her…poems,” wrote Contemporary Women Poets essayist Anne-Elizabeth Green, noting that in the collections Dwarf Bamboo(1987) and The Phoenix Gone, The Terrace Empty (1994) “Chin struggles passionately and eloquently in the pull between the country left behind and America—the troubled landscape that is now home.”
Photo credit: Niki Berg

Chin’s exploration of cultural assimilation often carries harsh political overtones. In her poem “How I Got That Name: An Essay on Assimilation,” from The Phoenix Gone, The Terrace Empty, she writes of her father’s seduction by Western culture and values: a “petty thug,” he “obsessed with a bombshell blonde/transliterated ‘Mei Ling’ to ‘Marilyn,’“ thus dooming his dark-haired daughter to bear for life the name of “some tragic white woman/swollen with gin and Nembutal.” Other poems reflect upon the scars borne by diverse Asian Americans, including women whose value as human beings has been reduced to their novelty as sex objects. She also deals with the fate of second-generation Asian Americans in poems like “I’m Ten, Have Lots of Friends, and Don’t Care,” included in her first collection of poems, Dwarf Bamboo.

Marilyn Chin has won numerous awards and fellowships, including the PEN/Josephine Miles Award, multiple Pushcart Prizes, a Fulbright Fellowship, a Stegner Fellowship, the Paterson Prize and further fellowships from the Radcliffe Institute at Harvard, the Rockefeller Foundation and the National Endowment for the Arts. Widely anthologized, her work was featured on Bill Moyers’s PBS series The Language of Life. Chin co-directs the MFA program at the University of San Diego, where she also teaches in the departments of English and Comparative Literature.

A dragonfly has iridescent wings
Shorn, it’s a lowly pismire
Plucked of arms and legs
A throbbing red pepperpod

Continue reading the rest of the haiku  here.     Some additional poems are also here.

The challenge is write a new poem or prose poem inspired by the title, verse or style by Marilyn Chin.   I look forward to reading your work. Please visit and comment on the work of others.   And Happy Weekend to all !   Grace (aka Heaven)

Thank you for introducing us to this amazing poet, Grace. I welcome the chance to explore her works.

So many amazing poems...thank you for featuring this poet, Grace!

I was so amazed by the quatrains.. I tried to borrow some of her style and write something more Nordic...

Hope you're all enjoying the weekend :D Sharing my poem "Summer Love." Hope you guys like it :D

Thank you Grace for this wonderful opportunity :D

Wow, there's the most dismissive and uncharitable description of the great Marilyn Monroe, ever. However, her style seems like something with an echo of familiarity to it, for me. Thanks for the introduction!

Delighted to be introduced to this extraordinary poet.

Yes, her judgment of Monroe (whom I still love, admire and feel compassion for) is harsh and narrow. But she was only seven when the star died; and in any case her work shows a tendency to be extreme and uncompromising in her views — however, she makes wonderful and surprising poetry all the same.

Hey Grace--thanks for the introduction to Marilyn Chin--I went in a slightly different direction, I think--maybe--ha. k.

I tried, but after the second stanza I got more sentimental than CHin-ish. Sigh. Thank you for her poems!

'Thats a good' article, i usually amazed with' this thing, i asked myself about this opinion, I wish You'll a better articles that can make another people impressive..don't make the article feel rigit and isn't interesting and poor, i like to read this' article and i think this is "good".thank you' m'y brother.