Hi everyone! My featured poet today is a well-respected Australian poet, critic and short story writer, Judith Wright (1915-2000).Wright was also an uncompromising environmentalist and social activist campaigning for Aboriginal land rights. She believed that the poet should be concerned with national and social problems. At the age of 85, just before her death, she attended in Canberra at a march for reconciliation with Aboriginal people. 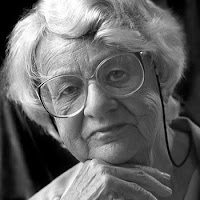 Judith Arundell Wright was born near Armidale, New South Wales, into an old and wealthy pastoral family.After her mother died in 1927, she was educated under her grandmother's supervision. At the age of 14 she was sent to New England Girls' School, where she found consolation from poetry and decided to become a poet. In 1934 she entered Sydney University. Wright studied philosophy, history, psychology and English, without taking a degree.

When Wright was in her 20s, she started to became progressively deaf. At the age of 30 Wright met her lifelong partner, the unorthodox philosopher J.P. McKinney, 23 years her senior; they later married.

Wright started to publish poems in the late 1930s in literary journals. As a poet she made her debut with The Moving Image (1946), in which she showed her technical excellence without burdens of fashionable trends. Most of the poems were written in wartime - in 'The Trains' Wright took the threat of the war in the Pacific as a subject. The main theme in the volume was the poet's awareness of time, death, and evil on a universal scale. With the following collections Wright gained a reputation as a wholly new voice in literature with a distinctly female perspective. The title poem from Woman to Man (1949) dealt with the sexual act from a woman's point of view. 'The Maker' paralleled the creation of a poem and the creation of a child. Several of her early poems such as 'Bullocky' and 'Woman to Man' became standard anthology pieces. Wright also wrote love poems to her husband. His death in 1966 and her increasing anxiety of the destruction of the natural environment brought more pessimistic undercurrents in her work. I praise the scoring drought, the flying dust the drying creek, the furious animal, that they oppose us still; that we are ruined by the thing we kill.

Most of Wright's poetry was written in the mountains of southern Queensland. Protesting the political policies of Joh Bjelke-Petersen, Premier of Queensland, Wright left her home state in the mid-1970s, and settled to a remote property near the heritage town of Braidwood, south of Canberra, where she wrote many of her later nature poems.
Wright received several awards, including Grace Leven Prize (1950), Australia-Britannica Award (1964), Robert Frost Memorial Award (1977), Australian World Prize (1984), Queen's Medal for Poetry (1992). She had honorary degrees from several universities. In 1973-74 she was a member of Australia Council.


Woman to Man
The eyeless labourer in the night,
the selfless, shapeless seed I hold,
builds for its resurrection day---
silent and swift and deep from sight
foresees the unimagined light.
This is no child with a child's face;
this has no name to name it by;
yet you and I have known it well.
This is our hunter and our chase,
the third who lay in our embrace.
This is the strength that your arm knows,
the arc of flesh that is my breast,
the precise crystals of our eyes.
This is the blood's wild tree that grows
the intricate and folded rose.
This is the maker and the made;
this is the question and reply;
the blind head butting at the dark,
the blaze of light along the blade.
Oh hold me, for I am afraid.
Late Spring
The moon drained white by day
lifts from the hill
where the old pear-tree fallen in storm
springs up in blossom still.

Women believe in the moon:
this branch I hold
is not more white and still than she
whose flower is ages old,

and so I carry home
flowers from the pear
that makes such obstinate tokens still
for fruit it cannot bear.
Bora Ring
The song is gone; the danceis secret with the dancers in the earth,the ritual useless, and the tribal storylost in an alien tale.Only the grass stands upto mark the dancing-ring; the apple-gumsposture and mime a past corroboree,murmur a broken chant.The hunter is gone; the spearis splintered underground; the painted bodiesa dream the world breathed sleeping and forgot.The nomad feet are still.Only the rider's hearthalts at a sightless shadow, an unsaid wordthat fastens in the blood of the ancient curse,the fear as old as Cain.

You can read more poems here.

The challenge is write a new poem or prose poem inspired by the title, verse or themes by Judith Wright. I look forward to reading your work. Please visit and comment on the work of others.   And happy weekend to all !   Grace (aka Heaven)

I love these poems.. And I have read many more of her.. This is exactly how I want to write myself, which makes the challenge even harder.. I hope I can post something later tonight..

What a spectacular poet, whom I had not come across and am delighted to be introduced to. The lines about nature opposing us as we kill it really hit home......she was ahead of her time to have recognized the destructive patterns in place in the 60's that would harm the environment - some of us woke up to that in the 70's and were deemed insane. LOL. Sadly, we were but the canaries in the cages. I am extremely intrigued with this poet and will explore her further. Thanks, Grace. i will give a response to this prompt a try but it likely will be later on.

Bjorn, thanks for linking up first ~

I find her voice very inspiring Sherry ~ Thanks for your comments ~

Hope you're having a wonderful weekend :D I chose the title "All things conspire" by Judith Wright as inspiration. Hope you all like it :D

Thank you Grace for yet another wonderful challenge.

I have been out today and am just checking in now. This looks like another enlightening post, Grace, which I will give my full attention to tomorrow. I've had a bit of trouble with my keyboard but I hope it is sorted out now.

How very thrilled I am to see Judith Wright featured here. I still think she is our greatest Australian poet, unsurpassed for beauty, depth and clarity – not to mention her subject matter, which is always vitally important to/about the human condition, and the natural world (often both at the same time).

Whether I'll get a poem written very soon is another matter; we'll see. But had to say thank you for making my day like this!

Thank you, Grace, for this wonderful introduction to the wonderful Ms. Wright. I will remember to seek more of her and her works. We were introduced to the Indigenous peoples of New Zealand in January 2013 by attending a long show of their tribal customs. I even rubbed noses with one.
Very likely I will be absent from the roll of this Sunday's mini-challenge as we are in the midst of moving across the city of Houston (right now we have two houses). I have not returned all comments from Monday yet either so I shouldn't be writing.
Thanks again, I hope things are settling down with you?
..

Hi Sanaa, thanks for participating ~

Hi Rosemary, it is my pleasure to feature an Australian poet ~ Feel free to link up later or during the week ~

Hi Jim, good luck on that moving as I know how tiring that can be ~ Things have settled down on my family with my eldest getting married and moving to their new home. Thanks for dropping by ~

Thanks for introducing me to such a wonderful poet, Grace. I fell in love with her "Five Senses"... and keep on repeating it in my head.

Thank you, Grace. Such a wonderful poet--so interesting. k.

I'm in this week but need a little time you guys run fast and furious! Lol! Just finished Mag see you soon.

Thank you so much for the wonderful introduction to Judith Wright. She is a beautifully talented poet.

Well that was fun! Glad I peeked in this week I enjoyed learning about Wright and basing my take on her work. I'll be back to read this week! Nice to be here again.

Thank you, Grace! I apologize for posting so late. What a wonderful, powerful, inspiring poet!