Hi everyone!  For my featured poet today, I am happy to showcase the work of Thom Gunn. 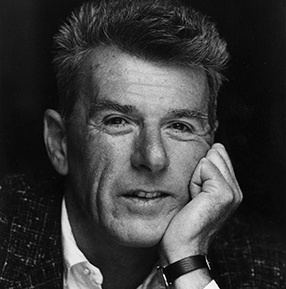 On August 29, 1929, Thom Gunn was born in Gravesend, Kent, England, the older son of two journalists. His parents were divorced when the poet was ten years old, and his mother committed suicide while he was a teenager. Before her death, his mother had inspired a deep love of reading in him, including affection for the writings of Marlowe, Keats,Milton, and Tennyson, as well as several prose writers.
Before enrolling in Trinity College, Cambridge, in 1950, he spent two years in the national service and six months in Paris. In 1954, the year after his graduation, Gunn’s first poetry collection, Fighting Terms, was published. The book was instantly embraced by several critics, including John Press, who wrote, “This is one of the few volumes of postwar verse that all serious readers of poetry need to possess and to study.” Gunn relocated to San Francisco and held a one-year fellowship at Stanford University, where he studied with Yvor Winters.
Over the next few decades, he published several collections that were not as warmly received as his earliest work, including The Sense of Movement (1957), My Sad Captains(1961), Touch (1967), Moly (1971), To the Air (1974), Jack Straw’s Castle (1976), Selected Poems 1950-1975 (1979), and The Passages of Joy (1983).
During the 1970s and 80s, Gunn’s poems were marked by the poet’s personal experiences as he wrote more openly about his homosexuality and drug use. Many critics believed he was betraying his talents. But with the publication of The Man with Night Sweats in 1992, a collection memorializing his friends and loved ones who had fallen victim of the AIDS pandemic, critics were reminded of Gunn’s early promise. As Neil Powell wrote of the book, “Gunn restores poetry to a centrality it has often seemed close to losing, by dealing in the context of a specific human catastrophe with the great themes of life and death, coherently, intelligently, memorably. One could hardly ask for more.” Gunn received the Lenore Marshall Poetry Prize for the collection in 1993.
He went on to publish several more books of poetry in the United States and Britain, including Boss Cupid (Farrar, Straus & Giroux, 2000), Frontiers of Gossip (1998), andCollected Poems (1994). He has also written several collections of essays, including The Occasions of Poetry(1982; U.S. edition, 1999).
Gunn’s honors include the Levinson Prize, an Arts Council of Great Britain Award, a Rockefeller Award, the W. H. Smith Award, the PEN (Los Angeles) Prize for Poetry, the Sara Teasdale Prize, a Lila Wallace-Reader’s Digest Award, the Forward Prize, and fellowships from the Guggenheim and MacArthur foundations.
Thom Gunn died on April 25, 2004, in his home in San Francisco.

The Man with Night Sweats

I wake up cold, I who
Prospered through dreams of heat
Wake to their residue,
Sweat, and a clinging sheet.

My flesh was its own shield:
Where it was gashed, it healed.

I grew as I explored
The body I could trust
Even while I adored
The risk that made robust,

A world of wonders in
Each challenge to the skin.

I cannot but be sorry
The given shield was cracked,
My mind reduced to hurry,
My flesh reduced and wrecked.

I have to change the bed,
But catch myself instead

Stopped upright where I am
Hugging my body to me
As if to shield it from
The pains that will go through me,
As if hands were enough
To hold an avalanche off.

I thought I was so tough,
But gentled at your hands,
Cannot be quick enough
To fly for you and show
That when I go I go
At your commands.

Even in flight above
I am no longer free:
You seeled me with your love,
I am blind to other birds—
The habit of your words
Has hooded me.

As formerly, I wheel
I hover and I twist,
But only want the feel,
In my possessive thought,
Of catcher and of caught
Upon your wrist.

You but half civilize,
Taming me in this way.
Through having only eyes
For you I fear to lose,
I lose to keep, and choose
Tamer as prey.
Thom Gunn, "Tamer and Hawk" from Collected Poems. Copyright © 1995 by Thom Gunn.  Reprinted by permission of Farrar, Straus and Giroux.

You can read more of his poems here.

The challenge is write a new poem or prose poem inspired by the title, verse or themes by Thom Gunn. I look forward to reading your work. Please visit and comment on the work of others.   And happy weekend to all !   Grace (aka Heaven)

PS.   This is my last post as a contributor for weekend challenges.   I thank you for participating in my prompts for the last 2 years.
Imagined By Scarlet at 12:00 PM
Email ThisBlogThis!Share to TwitterShare to FacebookShare to Pinterest
Labels: Featured Poet, Heaven, Sunday Mini Challenge, Thom Gunn

I am familiar with Thom Gunn's poem, "On the Move" and welcome the chance to read more of his work.

Thank you for introducing us to the work of many inspiring poets over the years, Grace. Your contribution to Real Toads has been appreciated.

Grace, I echo Kerry's thanks. I have very much enjoyed all the different poets. I really am enjoying the Thom Gunn's I have been reading today but having lived through the onslaught of the AIDS crisis in New York, I find them terribly sad. such beautiful poems though. K.

Grace, I'm always inspired by your posts.. and I'm shamed to say I've never read any of Thom's work.. The tamer and the hawk caught my interest, but I guess I wrote something more in my style... :-)

Thank you for the introduction to Thom Gunn, and to so many other gifted poets I had not encountered. I'm not very good at writing to this type of prompt, but I have really enjoyed the reading, and appreciate all the hard work you put in to bring us these voices, Grace.

Oh, wonderful, Grace! I adore Thom Gunn's work and have done since he started publishing. Busy Sunday coming up, but I hope to make time to attempt something.

A relative newcomer here, I have greatly enjoyed your posts. See you around the traps! :)

Thank you, so much, Grace, for all the posts you've offered us over the last two years...I've loved learning about new-to-me poets and more about others I'd heard of before. So inspiring and important!

Thank you, Grace, for introducing us to so many cool poets. Don't be a stranger!