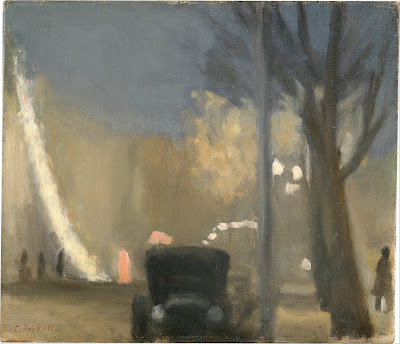 Greetings, toads and followers of the imagination's lily pond, hedgewitch here. This is normally Fireblossom Friday, but our Fireblossom has been momentarily dampened by a cruel dysfunctional modem, and has only the very spottiest of internet connections, so I am standing in as best I can.

The other day by pure random chance, I stumbled upon the picture above-- Collins Street, evening (Collins Street at night), 1931. by Clarice Beckett. (Public domain. National Gallery of Australia, Canberra, Australia. Image. ~via wikimedia commons )

It is an example of an imaginative, innovative and at the time quite controversial school of art called Australian Tonalism, related to the American art style of Tonalism, that flourished in the late 19th and early 20th centuries.

According to the National Gallery of Art of Australia:

" Tonalism is fundamentally different [from the traditional, craft-driven  schools of tonal painting practiced by Rembrandt, etc] and is best understood as a painting system. It involves no under drawing and is based on the rapid and direct recording of tonal impressions (generalized massed areas of light and dark) onto the canvas in the order the impressions meet the eye of the artist. Its intention is to create an exact illusion of nature. In this way, it is a spontaneous, ‘perceptual’ and responsive form of painting.."~© National Gallery of Australia, Canberra

The idea of trying to capture something in this way seemed to me very similar to what we do when we write spontaneously, trying to get words on paper as quickly as we can to nail down some image or idea. So, today, toads, your challenge is to do that.

There are two ways to travel with this challenge. The first is as a pure writing exercise. Try to create a poem, prose poem or piece of microfiction (less than 150 words) with 'no under drawing,' by taking an idea, a place, a person, an event or a mood, and quickly fleshing out a portrait of it in a blur of words. Use language to mass light and dark verbal 'tones' and build up your poem in dashes of description and image. The end result should be something immediate but  'misty' which gets its effect primarily through visualization.

However, I want this challenge to be as broad as possible, and to fit everyone comfortably, so the second approach is more general. If the above concept doesn't spark a resonance, please feel free to just explore the paintings in this school and allow them  to inspire you in any way, whether you create 'an exact illusion of nature,'  or something more idiosyncratic that is based on the thoughts or  moods these paintings evoke. This challenge is meant to be helpful to the writing process, not intimidating or limiting, so have at it in the way that pleases you the most.

Here are a few more paintings  and several quotes as well to help you along your way. All paintings below are in the public domain, so feel free to reproduce them, with the usual attributions.


"[Whistler].. was an American-born, British-based artist active during the American Gilded Age. He was averse to sentimentality and moral allusion in painting, and was a leading proponent of the credo "art for art's sake"...Finding a parallel between painting and music, Whistler entitled many of his paintings "arrangements", "harmonies", and "nocturnes", emphasizing the primacy of tonal harmony."~wikipedia

"Clarice Beckett’s paintings have been compared to W.B. Yeats’ statement that his poems were made out of a mouthful of air.…" (© National Gallery of Australia, Canberra)

"Australian Tonalism is characterised by a particular "misty" or atmospheric quality created by the [Max] Meldrum painting method of building "tone on tone". Tonalism developed from Meldrum's "Scientific theory of Impressions"; claiming that social decadence had given artists an exaggerated interest in colour and, to their detriment, [they] were paying less attention to tone and proportion. Art, he said, should be a pure science based on optical analysis; its sole purpose being to place on the canvas the first ordered tonal impressions that the eye received...."~wikipedia


"Leon Dabo was an American tonalist landscape artist best known for his paintings of New York, particularly the Hudson Valley. His paintings were known for their feeling of spaciousness, with large areas of the canvas that had little but land, sea, or clouds." ~wikipedia

You can explore more paintings done in the Tonalist manner at the following links:

American Tonalism Gallery,wikipedia,
Artists associated with Tonalism, wikiart.org (not all paintings are in public domain here so select carefully or use the 'fair use ' tag)
Clarice Beckett, wikimedia commons


Please link below, please write a NEW poem specific to this challenge, and as always, I look forward to seeing what everyone does with this one.

Imagined By hedgewitch at 6:00 AM
Email ThisBlogThis!Share to TwitterShare to FacebookShare to Pinterest
Labels: Fireblossom Fridays, Hedgewitch, tonalism

Thank you for standing in, Hedge...I enjoyed exploring the tonal concept. I hope your computer woes get figured out soon Fireblossom.

This is a writing challenge to sink the teeth into. Thanks for bringing it to us, Hedge.

What lovely, moody paintings. Thanks for filling in with such an interesting challenge, Hedgewitch.

Thank you for introducing these artists and school, of which I was ignorant before (and slightly less so, now)... ~

What a fantastic challenge! I chose a painting and just started writing..no edit.

I'm surviving my week (barely)and managed to jar a few thoughts loose, LOL - great prompt, Joy. I did not do it justice but consider myself fortunate - after watching five kids, age six months to thirteen, all week, amazing I managed to form sentences at all, LOL. However, I do seem to be really good at looking after kids. I've still got it!

Love this challenge! Mr. Linky does not appear on my computer anymore. Don't know why,
but you can find mine at: https://purplepeninportland.wordpress.com/2015/09/04/changing-perspective/

I had written this: What a marvelous prompt, paintings and all. I will probably not be back to write it, but I am delighted to read it.

But then I tried out the toning. And like it. Thanks.

I love this prompt.. and just hope I can write something. But the weekend is so intense.

Thanks to everyone--so many really good poems, and captures of that sense of tonal harmony I was hoping for! For those who haven;t played yet, please feel free to continue to link in over the weekend or whenever you find time--I will be back to check.

I think you hit an artistic nerve with this one. I have never read so many perfect poems in one place before. I am walking away in the best mellow mood... ummmmmm. A good, deep, cleansing sigh.

really luv this challenge, happy to be introduced to tonalism for the first time

Thank you so much for so ably standing in for me, Hedge. My connection is much better now, but still flakes out about once a day.

It's a great challenge, Hedge. I did a few and was going to compare them, but then some automatic things on my computer have completely bogged down my connectivity and everything's taken forever! (It is not exactly catching--this connectivity thing--it's something else you don't need to hear about--) Anyway, thanks for the beautiful pics especially. k.

I meant to say thanks TOO for the beautiful pics. Nothing is working right where I am--my brain most of all! k.

Lovely, as an Aussie, to see Beckett's work here. (My brother has a painting of hers, very similar to the first you've shown.) Just back from holidays, with many things to attend to, I don't have time to do a poem for this prompt, in fact have only just seen it; but wanted to thank you for the treat. It's also interesting to compare and contrast the American works.

PS And where was I holidaying? In Melbourne, in winter! Collins Street is busier now, but looks just as bleak and cold this time of year.

I found this school of painting really fascinating, Rosemary, and Beckett's work in particular. The American stuff to me is a lot darker and more...staged-feeling, I guess, but still, a very expressive style of painting. Glad you enjoyed it, and had a good trip as well.

Sorry to be late to the party! My computer issues seem to be resolved as far as blogging, though i am hesitant to speak too soon. I am still having issues with other things, like movies and what-have-you. Thanks again for standing in for me!

My pleasure Shay, and glad to hear there is some improvement in your internet woes.