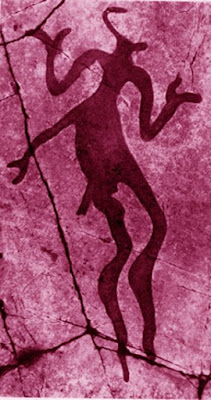 Recently in the fray of comments over a poem I had posted, someone lamented the darkness of its vision. I replied that the benefit of poetry is that each poem is a sung world lifted to view; yet the next day a wholly new and different poem from the same poet can lift into its place, composed of a heart and mind separate from everything that proceeds it. There are many, many things to sing about, and the richness of poetry is that its tapestry keeps unwinding, revealing new worlds and fresh visions.

When the Milesians were overtaking Ireland from the Tuatha da Danaan in mythic Ireland, the parties met to confer the terms of engagement. The Milesians agreed to leave the island and retreat a short distance back into the ocean beyond the ninth wave— a magical boundary. Upon a signal, they moved toward the beach, but the druids of the Tuatha Dé Danann raised a magical storm to keep them from reaching land. Amergin, the leading poet of the Milesians, sang an invocation calling upon the spirit of Ireland that has come to be known as The Song of Amergin,. The storm parted, the ship of the Milesians reached land, and the battle began. There were heavy losses on all sides but the Milesians carried the day, taking possession of Ireland's above-ground world. (The Tuatha set up camp Down Under in the Otherworld or sidhe.)

In her Gods and Fighting Men (1904), Lady Gregory translated The Song of Amergin this way:

The sixth century AD Welsh poet Taleissin picked up Amergin’s singing robe in the sixth century Book of Taleissin; ages later Walt Whitman wove and wore it in Leaves of Grass, as in "I Hear America Singing":

I hear America singing, the varied carols I hear,
Those of mechanics, each one singing his as it should be blithe and strong,
The carpenter singing his as he measures his plank or beam,
The mason singing his as he makes ready for work, or leaves off work,
The boatman singing what belongs to him in his boat,
the deck-hand singing on the steamboat deck,
The shoemaker singing as he sits on his bench, the hatter singing as he stands,
The wood-cutter's song, the ploughboy's on his way in
the morning, or at noon intermission or at sundown,
The delicious singing of the mother, or of the young wife at work, or of the girl sewing or washing,
Each singing what belongs to him or her and to none else,
The day what belongs to the day—at night the party of young fellows, robust, friendly,
Singing with open mouths their strong melodious song.

The poet embraces all of it, and by so doing sings the world.

For today’s Poems in April challenge, write a poem about the vantages available to you.  How many selves sing for you? Ailing lover, satirist, blue aesthete, parent, sybarite, hierophant, hot warrior, adept, mystic, deep animal, alchemist, saint, wandering sailor, baker, lost child, Beat, blackout drunk, shaman: Which poetic selves have you found useful, and how have they helped or taught you about writing poetry? Show us the panoply or use one persona to introduce us to the whole.

What is it about poetry that opens a bag of winds? What are the names in your stable of flying horses? What is the preferred mode of plainsong from your collection of singing shells? What goes into your magic box, and what is reserved for the third drawer only?


Imagined By Brendan at 12:00 AM
Email ThisBlogThis!Share to TwitterShare to FacebookShare to Pinterest
Labels: Poems in April

Thank you for a really challenging prompt this Wednesday morning, Brendan. I wrangled with ideas for a while and, in the short time I have this morning, I came up with something - I'm not sure if it's what you asked for, but here it is!

Thank you for sharing these thoughts, Brendan. To me, they perfectly espouse the spirit of this poetry month, and even this day 90 years after Maya Angelou's birth - she taught all poets to Rise. Rise above mediocrity, above the enforced thought or unoriginal quest. To every poet who passes hereby, leave behind your song, so others may learn the words.

I love a challenge that makes me think... as this one.

The songs of that sing or those that singe... might be a point of view for me.

This was quite challenging, Brendan!💜 Sharing my poem 'Song of Myself' hope I did justice to the prompt. Day 4!☕

Brendan - mine is a prose piece/prose poem, and I may have misinterpreted your wonderful prompt to suit my own ends. Ha. Hope that's okay.

I took it as writing about the characters/things that populate our songs/writing, and my piece is surely about that. Thanks.

I added some heroic couplets... not a long piece really.

@Helen - I so enjoyed your poem but find it very difficult to leave a comment on your blog. Apologies.

Brenden, you wrote this so well. The whole world sings to me. Sings better than I listen. A bit here, Mrs. Jim and I have noticed that the music and singing in the Irish pubs start at 9:00 PM sharp, most every one. So don't be there too early, but some before to find a seat.
..

@Helen - also after writing found that I couldn't post. Membership is beyond not being anonymous.

Exactly! often the assumption is made that the speaker of a poem--and the content of the poem--are recited facts. It ain't necessarily so. Moreover, as you have put so well, poems are moments of emotion. I might feel dark and broody one day, light and silly the next. They're both me.

A Happy Day Four to all. Thanks Brendon for an intriguing prompt today

Busy day, so I only just wrote my poem, at nearly midnight here. Apologies if it takes me a while to read all the others – which I am eager to do, as I'm sure there'll be some wonderful responses to this prompt.

Amazingly, this sparked some words--the myth and quotes therefrom a clear blast to the psyche perhaps, not to mention your summing up, which itself is poetry, Brendan.

An intriguing prompt. Thanks, Brendan. Definitely, our range of mood and theme changes with the wind. It cant be any other way.

Thanks Brendan, a challenge for me and worth the effort :-)

Thanks for another wonderful prompt this 30/30 Brendan. And isn't it exactly the point, as an artist, creative to NOT be pigeon-holed/boxed in? To dive, dip, sip from the wealth of emotions and experiences in the world - as for the duel/duality of "darkness~light" - well neither can exist without the other - and just because we choose to explore certain aspects more than others doesn't mean we are necessarily our creations.

Happy Creating this 4th - and let us be inspired by so many, and like Martin Luther King - let us not be afraid to walk into the dark so we can emerge into the light - and forge new paths and ways.

Helen Patrice, I cant tell you how delightful and entertaining I find your poem. But I cant get through the intricacies of signing in to comment on your site - it wont take my information. I am sorry about that. LOVED your poem.

I have been struggling to comment on Helen Patrice's wonderfully witchy poem but I can't get through the login and it won't accept my email address or url. I'd like Helen to know how much I enjoyed it.

I wasn't going to do many prompts this month, because, you know, NaPoWriMo. But here I am. It's the rhythm of that ancient Irish poem that got me, and I think it echoes a little in what I wrote. Anyhow, I'm definitely not doing this again...

Afternoon, Toads! Thank you, Brendan, for this challenging and insightful prompt. I wrestled with it for some time! :)

I was so intrigued with this prompt, but muddled around until the right idea came to me. I just love how ingeniously versatile this prompt is - you can go so many ways, just as Shay says. It all depends on which aspect of yourself you want to let have the spotlight.

I have so enjoyed reading the contributions to this prompt. Such a gorgeous plenty! We have so many treasures to share here.

Brendan, this is such a wonderful prompt. I feel inspired but with work pressures and deadlines this week I couldn't give it the attention it deserves. I wrote something marginally (at best) on point because I would really like to accomplish 30 this month, but I will come back to your prompt. Thank you.

Helen Patrice is a personal friend of mine (also I am on Dreamwidth as well as Blogger). I have passed on to her the messages from Kerry, Jim, Sherry and Kim. She says:
“I didn’t realise until now that Dreamwidth was being an asshat about non-dreamwidthers posting comments. But for those who are reading, thank you. I have tried posting comments on others’ poems, but have been unable to.”

She is proofreading her new book of short stories just now, but says that after that is done she will be reading again – and hopefully commenting – all over the place.

I am having such a hard time commenting on blogger—sorry if I don’t seem like I have visited—things just aren’t working right in the posting. Will try again. K.

It seems poetry month has me walking through my ancestry. My last uncle is not expected to make it through the night. I am so full of sorrow.

Love this prompt! I seem to be participating one day late in the Toads' prompts now 😉 I shall post a poem on April 5...

found this intriguing and lovely prompt too late in the day to write for yesterday - hope it is okay that it is late. really enjoyed the prompt - thank you.