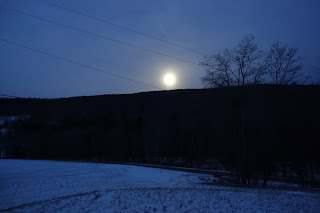 There are certain poems that just stick with me; even my half-sleep mumbles bits of lines.  One of these is “So We’ll Go Nor More a Roving,” by Lord Byron (George Gordon).

So We'll Go No More a Roving

So, we'll go no more a roving
So late into the night,
Though the heart be still as loving,
And the moon be still as bright.

For the sword outwears its sheath,
And the soul wears out the breast,
And the heart must pause to breathe,
And love itself have rest.

Though the night was made for loving,
And the day returns too soon,
Yet we'll go no more a roving
By the light of the moon.

“No more” is a common concept in poetry; it can refer to loss, but also to vindication, release.

Above is a wonderful rendition of “Hit the Road, Jack!” by Ray Charles and his back-up singers; below the first stanza of an earlier prototype by Shakespeare from Much Ado About Nothing:

Sigh no more, ladies, sigh nor more;
Men were deceivers ever;
One foot in sea and one on shore,
To one thing constant never;
Then sigh not so,
But let them go,
And be you blithe and bonny;
Converting all your sounds of woe
Into. Hey nonny, nonny.

The idea of "no more" is also present in many war poems and protest poems.  (I just found this one by Phillip Larkin, MCMXIV.)

And, of course, "no more" can refer to quantity--Whitman uses the idea in a very interesting way in the beginning of "Song of Myself:"

Your task today, poets, if you choose to accept it--is to spend a little time thinking about “no more.”  You do not need to use the actual words in your poem--although you certainly can--just write something that springs from the idea, whether nostalgically, eligiacally, gleefully, viciously--

A supplemental aspect of the prompt is to use some kind of rhyme or meter like Byron or Shakespeare that might allow you to "sing" your "no more. " (In other words, you could write your "no more" in four, using quatrains, like Byron.)  But this rhyming  aspect is absolutely alternative--don't feel any requirement.

And for the requisite little animal drawing--here is a picture from a little book I'm doing about a dog named Seemore, who would rather rove beneath a cheese than moon. 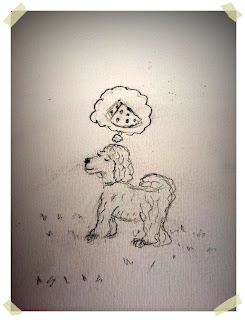 Thanks.
Imagined By Outlawyer at 11:36 AM
Email ThisBlogThis!Share to TwitterShare to FacebookShare to Pinterest
Labels: "No More" poems!, ManicDDaily, Weekend Mini-Challenge

Thank you, for the challenge, K...I wrote in the chat box about the post today...seems to be fine now.

I look forward to reading...I'll be catching up with everyone in the next few days.

Thanks, Hannah. I am traveling today and have mixed access to my computer-- on phone now-- hope all okay. K.

My poem isn't very musical, but I think the "no more" is definitely dancing in the lines. Awesome prompt, K.

I went with the rhyme--and the Byron of course is a high bar to hit, but I did have fun taking a walk on the surreal side with it. Thanks K for a great challenge.

This is a wonderful prompt, karin. I have been wondering of late whether i have arrived at the 'no more' of writing, but all your excerpts have got my poetry antennae tingling. I shall sleep on the idea and see if 'some more' words take shape tomorrow.

Of course i had to write something that could be sung... as usual not very uplifting but a wonderful prompt.

Thanks all. I have finally written something but may wait till tomorrow Sunday to post so I can think about it a little more. Thanks all for playing along. k.

Right away I thought of Poe's Raven. "Thus quoth the raven, nevermore. And still the raven remains in my room. No matter how much I implore. No words can ...". Good prompt, K, thank you.
..

'We'll Go No More A-Roving' haunts my mind the same way! And I'm mad about 'Hit the Road, Jack.' And I thought also of the closing lines of James Joyce's 'Watching the Needle Boats at San Sabba' which plays in my mind the same way as 'A-Roving'. (Actually, 'Hit the Road' does that too.) So I found a way to use the Joyce lines, and that sent my poem somewhere I didn't expect it to go, but there you are. You're so right about that phrase, 'no more'!

Oh, but the song-like rhymes and rhythm didn't happen. I hope I succeeded in getting something musical in the sounds and echoes and repetitions instead.

Have you seen the 1993 movie "Much Ado About Nothing?" I always hear
Sigh no more, Ladies in Emma Thompson's voice. Loved that movie!

Hey Debi, I will look for the movie, thanks. K.

No worries. I look forward to your poem. K.

thanks for the challenge :) Have a lovely week!

Ha. Yes. I didn't even make the connection to "no more." He's a cute little imaginary dog. k.

The Emma Thompson 'Much Ado' was terrific – and I liked the Joss Whedon one even better.

Great poems :)
When it comes to such poems can never say-'No more' :)

Thanks. Will look into them. K.

I'm posting pretty late but couldn't resist! I will be around to read in the next few days. Been pretty busy offline but need to write.

I love that song "Hit The Road Jack."

Thanks so much, Bekkie. K.