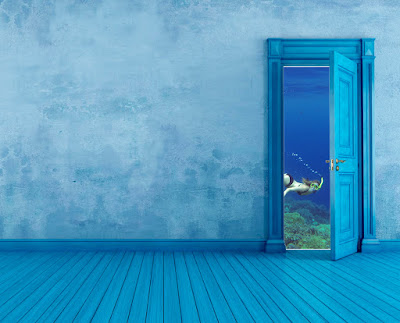 Doors mark our coming in and going through and out of this life. Big doors, little doors, stone doors, blue doors.

The Romans had a deity for doors: Janus, the two-faced god. January ends one year and begins another, and Janus sanctifies all passages and transitions with a gate that swings both ways. He was associated with Portunus, another gateway god who presided over harbors, travel, and shores.

Because doors have two sides to them, our relation to them is always duple. Albert the Great wrote, “In Germany there once lived twins, one of whom opened doors by touching them with his right arm, and the other who closed them by touching them with his left arm.” Our brain is halved by left and right hemispheres, each with their own realm of functioning—one analyzing, reducing, the other synthesizing, adding up. Is there a door between them which keeps us fiddling with its lock at the same time keeping its bolts in place?

Doors font inspiration. What creative impulse in us can resist opening them?  A shepherd on a remote Hebrides island in the early nineteenth century accounts that at night, “a woman often came out of the sea and said strange foreign words at the back of his door, and these, he added, in a whinnying voice like that of a foal ; came, white as foam ; and went away grey as rain. And then, he added, ‘she would go to that stroked rock yonder, and put songs against me, till my heart shook like a tallow-flaucht in the wind.’" (Fiona MacLeod, “Sea Magic”)

There’s always a danger in doors; they secure our world but also knock loudly with the Other. According to the old Irish dinshenchas, the hero Riach places into a well the severed heads of warriors slain in battle. The presence of the heads seems to magically affect the water and it becomes highly dangerous. In order to prevent it from rising up against him, Riach constructs a building over it in which it can be contained. But one night he forgets to place the capstone “door” back over the well one night and it rises up and drowns him.

Today our theme is Doors: Portals in, passage out. Find a door and try it.  Will it open or is it barred? Half-open, almost-closed? What freedom flows in as you go out? And what is the melancholy click of a door closing forever? Is there one door representative of the whole, a page which emblems the bestiary? Or is there a poem which resembles a house-shaped Advent calendar, with a door or window to peer into along every step of its way? You choose.

Write a poem about one door (or many) and bring it back here to share with your fellow portalettes. (Hmm.) What will we open on our separate lily pads? What singing skulls and water wonders we will find! What an Advent calendar we will house!

Imagined By Brendan at 12:00 PM
Email ThisBlogThis!Share to TwitterShare to FacebookShare to Pinterest
Labels: Weekend Mini-Challenge

Doors lend itself to great metaphors... both as locked and open.

Loved the prompt, Brendan! Sharing my poem 'of desire (and a door left ajar) Happy Weekend, everyone!💞

This one struck a chord! (The 'mini' is in the line length.)

Excellent prompt. I have posted my haibun. Hope you all like it.

This is a rich prompt, B--I wish I had the time or the great good luck to be able to write a new poem for it, but I did post an older one in honor of this ever-alluring open-shut mystique you illustrate for us so well. I am not linking, as i will not be around to return visits this week, but hated to ignore this completely.

I hope I am not leaping onto a pad where the waters are too deep. I wouldn't want to croak after all. Wait I think I a'ready toad that joke! Damn. Anyway doors lend themselves readily to the imagination so I figured why not, try the prompt and go with it.

Be Well in the garden with real toads.

Brilliant prompt Brendan - I've been working on it since last night. Loved the adventure of finding an answer.
Anna :o]

Hi Brendan, I'm just stopping by to say how much I love this prompt, and so enjoyed reading your entire post. Regrettably, I'm not in the writing frame of mind at this time but I feel certain that this is an idea I shall revisit when the muse returns. Thanks for being such a gracious host.

A happy weekend to all.

Hi Brendan. A great prompt that offers a plethora of possibilities. I am slowly picking up the writing again after a full blown foray into rhythmical initiation.Hope to find something to contribute shortly.

Thanks Brendan for the lens to focus a thought that was kicking around my head yesterday. The reminder of Janus' connection to doors brought it all together for me

Thank you Brendan for this prompt. Recent events have urged me to speak up.

Great prompt, lots of door stuff to read too

Thanks to all of you -- as I had hoped, for every lily pad at the pond a Door! What a feast it has been.

@X, I didn't see a comment link on your post but man, what a door. And when do we ever quite get Inside?

Brendan, thank you for this great prompt! It brought several ideas to mind so I think I'll return to doors later. For now, I have a car door for you. :)

"Great idea!" she says, peering through the half-opened door. Hmmm, what's behind there!
MNL Cactus Haiku

thanks, Brendan. add my voice to the chorus on X's post, too.