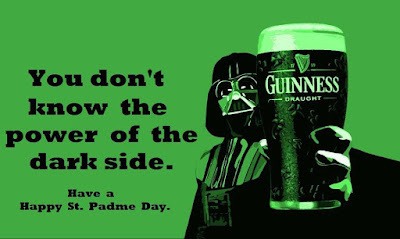 As the story goes, St. Patrick banished snakes from Ireland and saved his adopted homeland (he was born in a Roman settlement in North Britain) from paganism. He also saved Eire from the Christian fangs of Pelagian heresy, which taught that original sin was fake news. (Pelagius, whose name is based on a Greek word meaning “of the sea,” was said to have been Scottish in origin.)

We know now that snakes hadn’t been in Ireland since the glacial period, and some of us suspect that following Pelagius would have resulted in something less, um, fraught than Irish Catholicism. (I like to think of my patron St. Oran as a wet Scot.)

March 17 is celebrated as St. Patrick’s Day and immigrants of every stripe are invited to suffer the pangs of Irish nostalgia, wear green and drink way too much whiskey and beer. (When I was younger and wetter, lifting steins at Harrigan’s Pub on St. Patrick’s was akin to tromboning the pantheon of Irish saints.)

Let’s pluck three leaves from the shamrock and see if there’s a magic fourth leaf, down and back the mystery of history. In Irish lore, a four-leafed clover was deemed lucky, a springer of Otherworld doors; what wonders have you to share? Charm us with a blarney poem!

Does St. Patrick lamp your way back into your official migrant history, or does Pelagius hold the more durable and apt sea-candle for burrowing down into the salt reaches of New Grange?

Or this: Beer tasting a little moldy? Do you find nostalgia somewhat pathological, a too-dewy-eyed embrace for golden times that never existed or are forever lost? How are Irish immigrant dreams fueled by the Great Famine different than the desperation of Honduran or Syrian refugees?

And what if those snakes had won the battle for the Irish heart? What then?

As the Irish say, "Go n-ithe an cat thú is go n-ithe an diabhal an cat"—or, "May the cat eat you, and may the devil eat the cat." I look forward to whatever jumps out of this blarney hat!

Imagined By Brendan at 12:00 PM
Email ThisBlogThis!Share to TwitterShare to FacebookShare to Pinterest
Labels: Sunday Challenge

I liked the Tanaga so much I did another with today in mind. It's raining again today so I'm writing and not biking.

I biked twice this week and got caught in storms both times. Gusting winds were pushing me back and my feet, hands, and face were wet but my rain suit did well. I do prefer sunny days. Lol!

Be around to read and have a great weekend! Hugs!

I don't do St. Patrick's day so not really sure what this prompt entails. I'll.read the linked poems to get an idea.

I had to do something on the famine... think it's relevant today.

Happy St patrick's day everyone.... I just made an Irish soup out of all my words i.e. leprechauns, pots of gold...everything!

How could I resist? It was only a question of narrowing it down, and finding a place to stop.

I went with the rule of three, and wailed in my cups about love, like every good Irish woman of a Sunday.

A very sweet prompt - I could not resist - thanks. k.

I didn't dip into me blarney. I spoke me truth. Love the prompt!