A Toad Chat with Annell and Vivian


Two poets from opposite ends of the pond engage in a chat. Annell- a professional artist, living in New Mexico, USA and Vivian- a dentist, resides in London, UK. 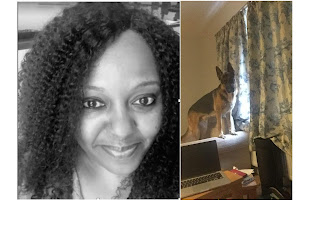 Annell opened the floor by asking Vivian a few questions and the following dialogue ensued:

Annell:  Tell me every single thing about you in seven words.

Annell: What year of your life, was the first birthday you remember?

Viv:       My fourth birthday…my parents were out and I was home alone with the nanny. Someone came by and dropped off a watch for my dad. I had great pleasure in taking it apart….much to my parents’ horror.

Annell: If you could begin your life again, what would you do differently?

Viv:      If I could, I would learn French and German. I’m language-daft, and have always yearned to learn - but, alas! Apart from that, I wouldn't change a thing.

Annell: Did you know either of your grandmothers and if you did, what were they like and how they influenced your life?

Viv:      I only have vague recollections of my maternal grandmother. I remember her to be soft-spoken. My paternal grand-mother was a ball of fire. She could single-handedly take on a nation…and win!  I like to think I’ve inherited something from both of them; the soft-spoken exterior calm layered over a fiery strong will.

Viv:      My mum is 82 and still with us. She was a teacher and is quite a clever woman. She’s a guru on the social media front…even setting up Whatsapp groups for the grandkids and sharing on Facebook. She’s always on one internet course or another….and reads all the time. I hope I take after her- keeping a sharp mind - in my dotage. I actually see more of my late father in myself in terms of character, but I’ve taken after my mother in terms of loving to read. 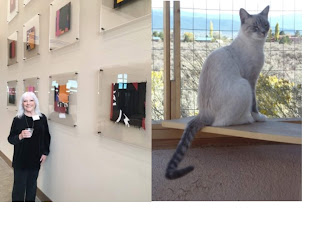 And then it was Annell's turn to answer Vivian's questions:

Annell: When my husband died, I was afraid to go out.  My sister told me to make a list, with instructions on how to get home.  It worked and I began to write, for example I would get worried about something, and I would remember to write it down, then I didn’t have to think about it then, I knew where I put it, and I could think about it later.  I think it was part of my grief, and I wrote and wrote, and haven’t stopped.  I find writing amazing.  Whose ideas are those?  Where do they come from?  Often I didn’t even know I thought that.  And after about 20 years of writing, I decided I had to embrace it as part of me.  I had to say I was a painter and I was a writer.  I write something almost every day.

Viv:       Amazing! And how much of an influence have your family had on who you are today?

Annell: That is hard to say.  I think I am becoming my own grandmother.  My mother was sweet and kind, I hope I am also.  My father was also kind, and funny.  Maybe I am too.  We were Irish and German.  And like you, I wish I had learned some other languages.
Your Mother in not much older than I.  I am 77, and can’t believe I have lived so long.  I don’t feel this old, I think I feel 20 years old.  This getting old, or maybe “older,” is new to me, and I think for each one of us,  it is a new adventure.  None of us really know how to be old, maybe being old is different than it used to be?

Viv: What would you say is your primary reason to face each new day

Annell: I love my life.  My work is an investigation, and every day is new.  Not nearly long enough.

Viv: Make sense to me! Now, if you were abducted by aliens and granted one last wish, what might that be?

Annell: Now that is the hardest question of all, if I could only have one, I would never be able to make a decision.  I would want more than one wish.  But with a wider vision, I would ask for peace for the world, that children would not have to suffer, nor their Moms or their Dads.  And in this idea of peace, Mr. Trump would go back to his private life, and allow the US, to make better decisions as they would affect the least of us.


We both feel we'd only just scratched the surface in this chat and will no doubt, carry on this conversation offline. We hope you enjoyed this as much as we did.
Imagined By Vivian Zems at 12:00 AM
Email ThisBlogThis!Share to TwitterShare to FacebookShare to Pinterest
Labels: Chat Show

This was a fun chat! I learnt something new about both fabulous women. Thank you for sharing these insights.

A pleasure indeed. Annell is a remarkable artist.

Thanks, Annell and Vivian, for this honest and lovely conversation. It's a pleasure reading both of you every time. :-)

Love this chat.. It is always great to learn something about poets I admire. Vivian, I so love your watch story. I can imagine the look you got from your parents. Annell, I am so on board with your wish. Thanks to both of you for letting us sit in on your chat.

Excellent chat- thanks for sharing with us!

Vivian: I would've paid a considerable amount to see your parents' face when you presented your watch-dismembering skills. 😂

Annell: I'm not saying that I want you to be abducted by aliens, but if you do and they say yes... Thank you!

Thank you for sharing, ladies.

I loved thios, especially Vivian being asked to tell everything about herself in seven words. That is a very cool feat! Annell, I feel the same way, the spirit within is young, it is my body that hobbles. I remember my Grandma, doing a few dance steps across the room when she was in her nineties and, in that moment, I SAW the young woman she had been still there inside her. I loved this chat and would read happily on for much more, were that possible. Also, Annell, thank you for asking the aliens to send mr t back into his cave. Or possibly just pick him up and take him back to his home planet. The Planet of Bad Hair. LOL.

Love to learn a bit more, some things I have pieced together by reading your poetry... other things were new to me.. happy poeting to both of you.

Loved reading and learning more about you two!💞 Thank you, Vivian and Annell for sharing a glimpse of your world with us.😊☕

Thanks for taking the time Sherry. We’re all young on the inside- where it counts😊

Thanks Magaly! Lol - about the watch😂

It is WONDERFUL to be able to say "I am 77 years young!" and I adore the watch story as well! Fun questions and gorgeous animals!

Such a nice exchange. It helps me to know the backgrounds of our writers. It often lends to a better understanding of what I read. (Did you know that Charles Dickens helped the hurt or penned in people involved in a train wreck? Charles wasn't hurt though. Or that while his family was in debtor's prison he was sent to a workhouse? He escaped and wrote law, i.e. in the days without copymachines legal paperwork had to have handwritten copies. Or that in his older age he was hooked on pain drugs? Part is written in Dan Simmons historical novel "Drood", named after Dickens' last novel, which he didn't finish.)
I agree that t has torn the good previously done with ISIS-like fever and hatred. I say "Lock him up" but in the other lockup place rather than prison.
Lastly, I enjoy both of you guys' work. And I envy Vivian living in London. Our daughter brought her family there while she worked at BP, British Petroleum, for five years. Most years we visited for up to a month at a time twice a year. They lived in St. Johnswood at the studio end of Abbey Road.
..

This chat is so wonderful and pleasant and interesting... not boring at all! ;) Thank you and it's lovely to learn a bit more about you, Annell and Vivian. This conversation really makes me pine for the possibility of we Toads all hanging out together, like an Imaginary Garden retreat. All of us with coffee or tea, casually chatting, soaking up some sun, taking some walks, but talking and sharing. Wouldn't that be amazing?!?!!?

Thank you to all who read and commented on our conversations. It was a pleasure.

When it comes to Zeus, I am like Nel (on Dudley Do-Right) with Horse. LOL. ZEUUUUUS!