Hello to all the Toads and Pond Dwellers! 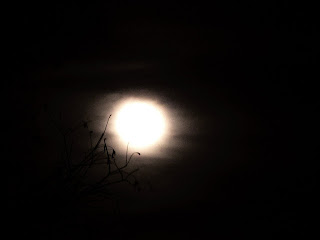 This 3-line poem has been called the American haiku and has two variations:

Robert Kelly, an American poet,  invented the Lune poetry form.  He felt that adhering to the strict form of Japanese haiku (5-7-5 syllables) in English creates a different poem than the Japanese intention. He invented the Lune to remove these differences, and the only requirement is the 5-3-5 syllables. There are no other rules i.e. no need for a cutting word or punctuation.    Rhymes are fine; subject matter is wide open.

In his book, Lunes, Robert Kelly has a short foreward:

Lunes are small poems that spend half their lives in darkness & half in light.  Each lune has thirteen syllables one for each month of the moon’s year.

a minute ago
that tree was
still full of blackbirds

is this form too short
love alone
makes do with less

Jack Collom created his version by accident.  He was, "beginning to work with schoolchildren when he misremembered Kelly's idea as a count of 3/5/3 words, rather than syllables." In doing so, he created a new variation of the Lune. As a happy coincidence, this variation made it easier for kids to create Lunes, since words are easier to count than syllables.

Here is one from Kim Nelson:

In writing the lune poem, be guided that the intention is to make the minimal reverberate to the maximum.  Each lune is a separate poem.

This can be a single lune or a series of interlocking lunes.

I look forward to your words.   Happy Sunday to all ~

This sounds like fun, Grace!
Lots of puns upcoming for "claire de lune" perhaps? I will try not to be one of the punsters, but I can't promise.
K

I love this challenge, Heaven. I will back later - we're taking my eldest daughter back to college after her short break, this morning.

What a lovely challenge Grace. Happy Sunday everyone!

Nice new snappy forms. Thank you and have a pleasant warm[ish] sunday.

Kay, Kerry, I can't wait for your lunes.

I noticed though that the second Kelly lune is lacking a word on the third line. Since the article is linked, I am taking the liberty to amend the form here:

Happy Sunday to all ~

This is going short with a vengeance, Heaven. (Please forgive me if I still call you that--if you hate it let me know) and I'm the one who thinks 55 words is an ordeal by fire. But will see what I can do

You can write a series of lune poems ~ Smiles ~

This was fun, Grace, and very challenging. Fortunately it is Sunday morning which has its own peculiarities around Philadelphia and other places I have lived. Go faithful!

Susan, it happens around here too ~ Smiles ~

I enjoyed your challenge, Grace! Happy Sunday to everyone.

we could go all day with these, huh? maybe i will!

Lunes I am feeling looney!

I hope to catch up for the past couple of days!
Our internet was on and off all day yesterday?!

Marian, you can write lunes for the rest of the month, ha ~

Ella, I look forward to your looney lunes ~ Smiles ~

Thank you for this challenge Grace,,I like the shorter forms. I think what you say is correct most of my Haiku have been Lunes :-)

what a great new form, it's worked so well for writing about the church work I've done with the kids this morning, a lot of playing on words as well :)

Thanks for the opportunity to post today. Today my writing is quite serious- focusing on something that really weighs me down.

I want to write another one ;D
Thank you Grace!

I have had a non stop weekend and if I don't get the weekend prompts done today I will hope to link them Monday. Thanks. I like this challenge as it is a new (short) for. Horray

Grace, I hope you will excuse the funny one about my cat barfing, but it just... came out... er, you know.

The last one is a true story, another aspect of my relationship with my mom, gone 21 years this month.

Thanks for a lovely prompt, Grace. Sunday is a work day for pastors and their spouses, so I got to posting a bit late! Amy

Hi, I wrote a moon centered poem but not sure how to send it... it is also on face book and my pesla.blogspot com I have some trouble with the formating it should be 9 lines more or less the same length ... it covers agoraphobia among other things in our virtual world and human relations

BTW I think there are better forms of haiku closer to the Japanese model in how they measure or count syllables than those presented.

Thank you, Grace, for sharing this American-style haiku form. It's lovely. I just captured the moon and was inspired to write a lune poem. Enjoy! :)

Ellecee, thanks for playing along. Lune poems are simpler than haiku.

Emma, happy to see that you like the short form ~

Ella, you can write lunes for the rest of the week, ha ~

Margaret, I will check it out on Monday ~

Amy, I enjoyed your various take on the lunes ~

PeSla, please enter the specific post link in our Mr. Linky if you want to play along ~ Otherwise, we wouldn't know where to find your poem ~ Please note that this challenge form is very specific, a lune poem ~

Thanks everyone for participating ~

These were fun forms for me Grace. I am so happy when I find one I feel I can actually do. Mine both turned out to be serious but still I enjoyed writing them.

Peggy, I think you may have to enter the correct link again ~ Thanks for playing along ~

Peggy, Your site locked me out. Please check its settings!

Hi!! This is great! I'll have a post tomorrow to share...to rough and late to night...look forward to reading you guys. :)

Grace ~ have been meaning to ask for ages ~ does 'Imaginary Gardens With Real Toads' allude to Marianne Moore? ~ it's a genius title :)

Good to see you here ~