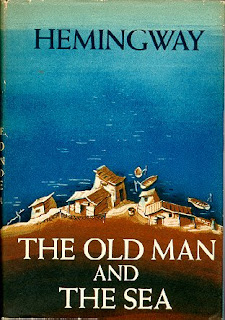 Written in 1951, and published in 1952, The Old Man and the Sea is Hemingway's final work published during his lifetime. The book was featured in Life Magazine on , and five million copies of the magazine were sold in two days. The Old Man and the Sea also became a Book-of-the Month selection, and made Hemingway a celebrity. Published in book form on , the first edition print run was 50,000 copies. The novel received the Pulitzer Prize in May, 1952, and was specifically cited when he was awarded the Nobel Prize in Literature in 1954.
It centers upon , an aging fisherman who struggles with a giant marlin far out in the .  Unable to pull in the great marlin, instead finds the fish pulling his skiff. Two days and two nights pass in this manner, during which the old man bears the tension of the line with his body. Though he is wounded by the struggle and in pain, expresses a compassionate appreciation for his adversary, often referring to him as a brother.
THE CHALLENGE
Write a poem inspired either by man’s eternal fight for survival against the forces of nature,
“But man is not made for defeat,” he said. “A man can be destroyed but not defeated.”


or allow your love of the sea to guide your pen.
“He always thought of the sea as 'la mar' which is what people call her in Spanish when they love her. Sometimes those who love her say bad things of her but they are always said as though she were a woman.”
Please leave a comment and provide a link to Real Toads on your blog.

Imagined By Kerry O'Connor at 8:36 AM
Email ThisBlogThis!Share to TwitterShare to FacebookShare to Pinterest
Labels: Kerry's Challenge

Kerry, you are a wizard at finding wqonderful inspiring prompts. Of course I have a word or two to say about the sea. I am brain-dead this morning, but when I adjust to the reality of being awake and upright, I will give this a go. Thanks for aiming me in the direction of a poem.

Kerry, I just recently reread this book, one of my all time favs. Thanks for the prompt.

Ha! This was not even written for your prompt, but my response to our weekly format challenge has at least an element of this prompt. Lucky me! Plus I'd already linked here...super lucky me.

"Feebly, we leave our Terran home", to the prompt man’s eternal fight for survival against the forces of nature.

This is a very good prompt indeed!

I managed one poem for two prompts. Yippee!

Mine came almost fully formed into my head as I was reading Philip's!