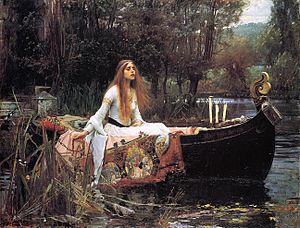 Hi, Toads! It's my privilege to present my favorite poem, but I am going to fudge just a bit, because My Favorite Poem has had its own stand-alone page at my blog for ages, and also, I recently wrote about it on my blog, so I think featuring Emily Dickinson's "I Cannot Live With You" yet again would be a bit much.

Soooo, I am very pleased to present my second favorite poem, Alfred Tennyson's "The Lady Of Shalott." To me, Tennyson, along with Longfellow, is the master of making words sound marvelous to the ear. Even if one did not speak a word of English, hearing "The Lady of Shalott" read aloud would be a very pleasing experience indeed. Add to that Tennyson's affinity for Arthurian subjects and the absorbing, haunting tale of the Lady herself, and you can't do much better.

There are actually two versions of this poem, one written in 1833 and the other in 1842. This is the later version, which I think has a much better, more pleasing ending.

I have a replica of the J.W. Waterhouse painting of The Lady of Shalott on my living room wall, and it is the same one I have placed at the beginning of this post. To top the whole thing off, I give you Loreena McKennitt's memorable musical rendition, at the end of this post. I hope you will enjoy Tennyson's "The Lady of Shalott" as much as I always have.

Imagined By Fireblossom at 12:01 AM
Email ThisBlogThis!Share to TwitterShare to FacebookShare to Pinterest
Labels: A Toad's Favo(u)rite, Fireblossom

Wonderful, Shay! I completely agree about Tennyson and Longfellow writing poems pleasing to the ear.

Sounds like this, to my mind, should make everyone want to be a poet. A perfect choice for a second-most-favorite poem!
K

There are some poems which so capture the imagination at an informative age that they become forever etched on the consciousness, and this is certainly one of those poems. There are some lines which stand out as some of the best in literature.

This whole stanza is superb:

She left the web, she left the loom,
She made three paces thro' the room,
She saw the water-lily bloom,
She saw the helmet and the plume,
She look'd down to Camelot.
Out flew the web and floated wide;
The mirror crack'd from side to side;
"The curse is come upon me," cried
The Lady of Shalott.

For next Monday, I'm thinking of choosing one line as the first line of a new poem.

Thank you Shay! How can anyone not love that!?!

One of my favorites (and the Waterhouse also)--so glad you chose it, Shay--it was very soothing and lovely to re-read it this morning after the turmoil here yesterday..there is a timeless quality to the Arthurian legends--they seem to reach across centuries and cultures and hit something at the very heart of human experience. I really noticed the careful drawing of Lancelot in his blinding splendor this time--'the gemmy bridle..' what a phrase. Thanks for sharing.

A lovely and impressive share Shay ~ I now appreciate the choice of rhyming words and the flow of the story line, until her mournful passing ~ Thank you ~

I spent a delightful hour with this posting, Shay, thank you for reminding me and for giving me this singer who was new to me.

I have always loved this -I hear it as the end of Paganism and the victory of the Christian world. The most powerful moment for me is when the mirror cracks. Tennyson, what a storyteller.

How gorgeous is that?

gosh this is tweaking old, well-buried memories of reading this aloud from, hmmm, what ever happened to that book anyway? and loving these rhymes. then and now. thank you, Shay! (rummaging through my attic tonight to see if i can find those volumes)

I am getting such a good education with these fav poems. I was not familiar with this one and enjoyed reading it and learning about it. Thanks.

Same with me, thank you for sharing it with us!

A perfect combination. I love Waterhouse's paintings, the poem is melodic and beautiful and Loreena McKennitt is superb!

Interesting background on this piece. Wonderful the way you included a bit of history with art and music too.

Thank you Shay! I had not heard of this one and the music was perfect~
I loved your pick :D

The paintings that went along with McKennitt's singing were incredible! So dramatic. My son LOVES anything Arthurian - he and I went to a deli a few weeks back that has a book shelf with free books. I picked up (actually took out of my son's hands) a book "The Child Queen" by Nancy McKenzie. It seems to be a novel written in Guinevere (first person). I'm only on page 30, but interesting so far.

Here is a link you can copy and paste if you haven't read the book or seen this delightful movie yet (Anne of Green Gables) I think you will get a kick out of it.