I found this challenge difficult, until I went downtown to the historic part of the city, I frequent.  I felt the spirits whisper to me and the connection I discovered stunned me.  I live close to Elizabeth City, NC.  Orville n' Wilbur Wright stayed in town before going to Kitty Hawk, for their first flight.  They also inspired the poet I want to share with you today. 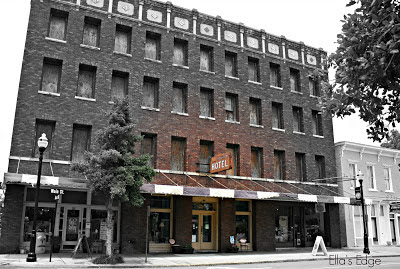 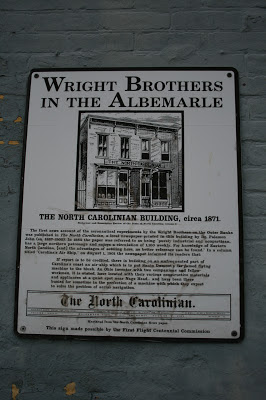 It all started the night I went to my daughter's boyfriend's graduation.  I sat there in the bleachers and Robert Frost's poem, A Road Not Taken, popped into my mind.  It was read at my graduation.   Later in the week,  Robert Frost's name surfaced again.  I took my daughter on an art date downtown.  I discovered there was an antique shop, in the former Southern Hotel.  This shop is inside the historic lobby.   It is steeped in history and charm.  The original staircase once lead to the rooms and a ballroom was on the fourth floor.  Still in existence is the original marble slab check in counter, the service elevator door and button, and the gorgeous checkered floors.  The ceiling has had some work, but you can see it is unique. 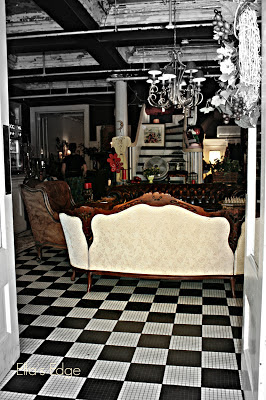 I talked to the shop's owner about the history and yes Orville n' Wilbur Wright had been in these parts, in this hotel.  She said other names and I heard her mention Robert Frost.  I stopped on the way home to mail my butterfly art submission to a magazine and knew I had to do some research.  I discovered Robert was a  New Englander, like me.  He  had been here in this area, not just in the city, but on the Dismal Swamp.  I live near the Dismal Swamp State Park, which is in both North Carolina and Virginia. The swamp was part of the National Underground Railroad and considered a national treasure. How did he end up here, I wondered?

He had proposed to his love, Elinor White we share the same initials. She was in college and said no. She wanted to finish her education before marriage, smart girl. He had written a poem for her called My Butterfly-I have goosebumps I just mailed my butterfly art-weird.  It was his first published poem.  She refused his proposal and he boarded a train-distraught and ended up in my neck of the woods.

Precipitate in love,
Tossed, tangled, whirled and whirled above
like a limp rose-wreath in a fairy dance.
When that was, the soft mist
Of my regret hung not on all the land...

In the wood-world’s torn despair
Than now these numberless years the elves,
Although they are no less there:
All song of the woods is crushed like some
Wild, easily shattered rose...

I dwell with a strangely aching heart
In that vanished abode there far apart
On that disused and forgotten road
That has no dust-bath now for the toad
Night comes; the black bats tumble and dart;...

“Poet Robert Frost vanished into the , according to local legend, contemplating suicide. After imbibing at a local roadhouse, Frost changed his mind and was inspired to write his signature poem, The Road Less Traveled.”

Later published as The Road Not Taken:

And both that morning equally lay
In leaves no step had trodden black.
Oh, I kept the first for another day!
Yet knowing how way leads on to way
I doubted if I should ever come back...

Elinor and Robert did get married in 1895! She finished college, he did not.

I discovered Robert Frost wrote a poem about Orville n' Wilbur years later. Their first flight was in Kill Devil Hills, but the record soaring one was in Kitty Hawk. Info here.
There are 473 lines in his Kitty Hawk poem. I will share a few stanzas-no not my favorite poem.

Kitty Hawk, O Kitty,
There was once a song,
Who knows but a great
Emblematic ditty,
I might well have sung
When I came here young
Out and down along
Past Elizabeth City
Sixty years ago...

When the chance went by
For my Muse to fly
From this Runway Beach
As a figure of speech
In a flight of words,
Little I imagined
Men would treat this sky
Some day to a pageant
Like a thousand birds.
Neither you nor I
Ever thought to fly.
Oh, but fly we did,
Literally fly……

And now my favorite poem:

To the Thawing Wind

Come with rain, O loud Southwester!
Bring the singer, bring the nester;
Give the buried flower a dream;
Make the settled snow-bank steam;
Find the brown beneath the white;
But whate'er you do to-night,
Bathe my window, make it flow,
Melt it as the ice will go;
Melt the glass and leave the sticks
Like a hermit's crucifix;
Burst into my narrow stall;
Swing the picture on the wall;
Run the rattling pages o'er;
Scatter poems on the floor;
Turn the poet out of door.

I love how Robert uses nature as a metaphor.   For me, this poem expresses the writing process. I feel the insight of how we as poets bring life to our words and make them breathe.
Robert Frost:   " A poem aims for “a momentary stay against confusion.” It “begins in delight and ends in wisdom.”   ...“Like a piece of ice on a hot stove the poem must ride on its own melting.”  He stated the highest goal of the poet is— “to lodge a few poems where they will be hard to get rid of.”

For info about this poet check these sites:

The Figure A Poem Makes

ooooh Ella, this is fantastic! so interesting, most of those details are new to me! (though i'm here at Amherst where we have the Robert Frost Library and a stately statue of him overlooking the quad). thanks so much, this is just wonderful and i love all the coincidences and personal connections/revelations.

I love poems about the poetic process, especially those written by those whose words have become a part of our lives. The synchronicity of your journey to arrive at this one choice is fascinating, and I love all the snippets you have provided. Frost is a continual source of inspiration to me.

Oh, you've chosen well, Ella, a poet of your native land whose talent is unquestioned; a poet who, now that you've identified with him and his work, has the power to inspire your own work.
Wonderful!
Luv, K

Ella, this is fantastic. Ghost House makes me think of the loss of my family home two years a go. Thanks for this beautiful look into a poet's life and poetry.

What a wonderfully detailed post, Ella. I enjoyed reading your favorite Frost poems.

Get thee out the door, poet!
I love the poem you Favorited and will add it to the poems I cannot live without. A few of the others are already there.

Thank you, Ella for the journey involved that brought you to this poet!! I love the first poem you feature...My Butterfly...beautiful indeed..I hadn't read that one before. :)

Wow, so powerfully written. I have so many images passing through my mind. You took me from a swamp, to a rejected lover, to butterflies, to storms and soaring airplanes. What a trip. I love the way you write.

I enjoyed your process Ella ~ Thank you for sharing and yes, To the Thawing Wind is beautifully done ~ I admire poets who can write words with much depth & meaning especially over time ~

Sigh.
My favourite poet wrote more than 500 poems. I love lots of bits of many of them, but I do have some very favorite lines.
Working on it. Working on it.
Sigh again.
K

Hi Kay-I think I am more like you!
I have favorite lines,but nor really a favorite poem ;D YOU can do it!

Renee-Thank you so much for stopping by :D I hope to do a book someday...poetry first ;D You are sweet~

Hannah-It was kinda crazy! I found many of his poems that I too hadn't read! It is nice to follow a new voice :D Thank you! SS

Susan-Thank you :D I do think I find lines that I'm more attracting to than a favorite poem, but when I read this one...I could feel it! Thank you so much!

Mary-Thank you! I had fun doing it.
It was an unique string that connected Robert Frost n' me ;D

Susie-I'm sorry to hear that! I have felt that vibe, similar to his poem.
Thank you Susie for sharing! @>-----

Kay-Beautiful Kay! One can hope ;D
I do wonder if he is telling me to go home?! Maybe he is reminding me to write no matter the circumstance!
It sure has been an odd dance as of late! Life changing in fact! Thank you~

Kerry-Thank you so much! It was mysterious and I had to share~ I do not really have a favorite poem. I have favorite lines... I do think it is wonderful to revisit poets we remember from our youth. Another look regains further insight! Thank you Kerry for gathering us to share! @>-----

Marian-Oooh, how magical! I am from Edna St. Vincent Millay's neck of the woods. I actually have climbed the mountain where her poem
"Renascence"-is showcased in engraved granite! Thank you so much ;D
I think we should visit some of our childhood favs! Tell Robert I said "hello" :D He still is trying to tell me something. I found a quote of his yesterday in a yoga book! "The best way out is always through." Thank you!


Mama Zen-Thank you so much ;D

I'd have refused him, too, based on that first poem. Not ready for prime time, Bobby!

As we all know, he did find his voice, though. My father had a framed copy of "The Road Not Taken", which included a charcoal portrait of the author, hung over his desk (this desk, that I am typing at right now) when I was growing up. It remains a favorite of mine, and certainly one I have lived by.

Sometimes Frost is a little bit too flinty New Englander for my taste, but other times he just blows me away with something like "Stopping By Woods On A Snowy Evening."

Thanks for the history and the marvelous choice and the very interesting coincidences, Ella!

Fireblossom-lol, besides she had her own goals! Smart gal~ I love that you shared this. I can see it-I have my father's desk, in my creative space. It is piled with poems and items to sew. It is a special poem~

I know what you mean-for me it is the farmer's mentality. I can appreciate it, but I can't relate.

I think Robert Frost should appear at every graduation ;D I loved what you shared~ Thank-you!