Get Listed ~ The Grapeling Way

Our guest contributor today is the enigmatic poet who blogs as Grapeling, and is a regular participant in Real Toads.
M was so kind as to share some thoughts about the writing process and a list of words for us to include in poetry, but he has decided to take a short break from blogging at this time, so I cannot provide a link to his site. 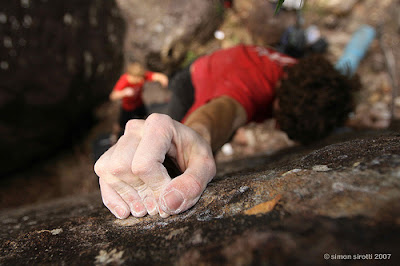 Grapeling reminds me of the word "grappling", which is something we are all familiar with as a poets who constantly seem to be trying to get a grip on words.

M describes his process thus:
I hear or see something that reminds me of a word, which becomes a phrase of between two and ten words. The poem evolves from that. I speak lines aloud, as I believe all poetry should be spoken, even if it contains layers or can be construed in different ways depending on line break and intonation.

On his use of words in poetry, M shares the following:
(I prefer) a selection of common words juxtaposed or placed in line breaks, so they project more than one sense or meaning, (rather than) choosing uncommon words. I tend to cross up usage, using verbs as nouns, for example, rather than using adjectives. One thing I try to accomplish with each writing is to not sound contrived, or forced - which is ironic considering that poetry is specifically contrived to contravene 'normal' speech.

M provided a few other suggestions:

- When possible, eliminate "the".
- Minimize conventional 'adjective-noun' pairings (starry night, verdant hills) in favor of unconventional (starry hills, verdant night)
- Use line breaks instead of commas, allowing the reader to read both with, and without a break when trying  to convey multiple meanings that may be contradictory, but which together might form a cohesive image.    For example:
heaven glanced down with fury
tender as youth
curious
- Speak lines aloud for cadence and natural pauses.

Please select three or more words from the list and write a new poem for this prompt.

Imagined By Kerry O'Connor at 12:00 AM
Email ThisBlogThis!Share to TwitterShare to FacebookShare to Pinterest
Labels: Get Listed, Grapeling

I've briefly emerged from my pond to sit on the bank. Wait, that's a frog. OK, from my pile of leaves. :) Thanks for asking me to contribute, I am honored. I'll be back to visit the other toads later, and look forward to reading.

I think there's a bit of summer malaise all over the blogosphere lately. I certainly have felt too distracted and spent to do much, and I know several others of our regulars are taking well-deserved breaks for one reason or another.

I think that's a good thing. We will all meet again around the pond at some point, I know.

That said, though I really hardly ever do word lists, I found this one helped cook up an old fragment from the musty dregs of the cauldron, so thanks Kerry, and Grapeling, for the assist.

Ah, but good poetry shouldn't come off contrived. Even in more formal forms, it should sound as if the language is organic. Art is crafted so our aim is to render something as organic as possible. No?

M, that is one reason I enjoy your work. Your vocabulary is organic and the lines while surprising at times, they never come off forced. That is craft. And those who call themselves poets commit to honing their craft.

I'll get off my soapbox now.

*shoots straw wrappers at LaTonya on her soapbox*

I am going to try to do this list after work tonight.

I will be back to play ~ Smiles from across the pond ~

Hello M,
I love your list! I need to work on being more organic~ Thank you M and Kerry!

Many thanks, M. I am happy to see you have shared your own poem with us, and it says much about the creative process and the importance of hiatus.

Thanks, Kerry. Sorry about the confusion, KayD and thanks for clarifying, Grace. And yes, grapeling is a variant of grappling - hence, the tag line, "it could be that". Or, a small grape (made up word) grapeling. Because, well, it could be that, too. I'm blown away by Hedgewitch and Heaven's pieces and look forward to the others. ~ M

And thanks for the awesome wordlist ~

Loved the list..struggled but managed to come up with something!!

Grapeling, I saw no where to comment on your remarkable poem on your site. A fabulous write. Love the idea of the sea as a blue plate special, but as you dont live in the sky, must make do with a tall hill. And the way your poem (and climb) circles back to the beautiful closing stanza. A wonderful poem to read and imagine.

Grace - oops! Just turned the comments back on.

Toads--thanks so much for all the comments--today has been a crazy day--I will be around to read yours tomorrow.

M, thank you! I hope my offering is a journey ;D

Sherry, thank you. It's one of my favorite walks, up above Dartmoor Street in north Laguna Beach. ~ M

Marian, as always, a beautiful write. Thanks for contributing.

LaTonya, thank you. Of late, my organic has mostly been bull**** and so I've not been much to call myself poet - the muse has taken summer vacation, perhaps - which is a factor leading me to step back. I'll visit, here and again, though, and catch up. Cheers ~ M

I love the list Grapeling although I struggled with it. For some reason my muse decided to grab a magic wand.

Rough week. Of course, that's when I most want to write but it took time. Spending the morning reading and commenting.
Happy reading,