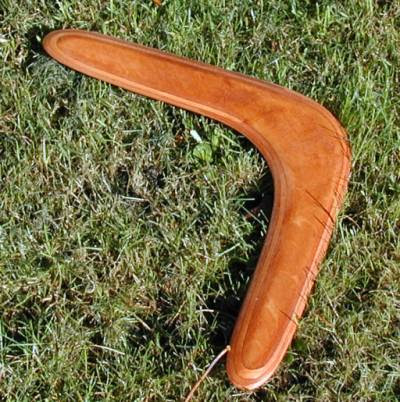 A boomerang is a thrown tool, typically constructed as a flat aerofoil, that is designed to spin about an axis perpendicular to the direction of its flight.

A returning boomerang is designed to be thrown in a closed arch path, which returns to the thrower.

Boomerangs have been historically used for hunting, as well as sport, and entertainment. They are commonly thought of as an Australian icon.

I'm pretty excited to share this form with you...I hope that you'll enjoy it as much as I do. :)

I've been in love with the This poem is a ___, poems. I'd say it's one of my new favorite approaches to poetry and I’ve invented a form to serve the idea and give it a shape that can be repeated. I call it Boomerang Metaphors, (you’ll see why)!

* Support each statement in separate stanzas, (one can choose the length of the supporting stanzas and whether or not to rhyme or employ free verse).

* Restate the statement that’s being supported in the last line of these supporting stanzas, (as mini boomerang metaphor refrains).

* Then name the list of three, “This poem is a _____,” statements again as a boomerang metaphors closing refrain.

Note: One may choose to state the closing refrain slightly morphed but mostly the same. As it seems, words that go out into the world do tend to come back touched – slightly transformed.

A suggestion: One may choose to free write as a precursor to writing this form. I find that it’s really freeing to list a bunch of, “This poem is a ___,” statements before beginning. You may end up with some that relate that you can trio together or some that juxtapose to contrast brilliantly.

I sure hope that you’ll try this form! I had a fun time creating it and I believe it will live in my tool box of writing implements for years to come!

If anyone would like an example of a poem written to this form please, feel free to click over to read the first poem that resulted when I applied the formula that I designed. It's entitled, This Poem is a Hoe, the Wheel and a Sphere.

Also, if anyone's interested, there's a link at the bottom of that post that will bring you to Poets United where this form was recently featured in a chat between poets.

Thank you, for the opportunity to share this form. :)

Please, visit your blogging friends and see what they've created, too.

Imagined By Hannah at 12:00 AM
Email ThisBlogThis!Share to TwitterShare to FacebookShare to Pinterest
Labels: Hannah Gosselin, Mini-Challenge, Sunday Mini Challenge

To be honest, when I first saw this form I thought I could only screw it up, and I closed the tab. However, I am very stubborn and I was determined to give it a try. I had fun once I got started, and it was not so difficult as I feared it would be. I hope I did okay.
http://poetryofthenetherworld.blogspot.com/2014/07/this-poem-is-gem-rock-and-stone.html

I am so happy that you came back and brought us your gem of a poem, Quilla!!

Thank you so much!

My apologies folks for mistakenly scheduling this challenge too early...normally the Sunday mini challenge is posted for noon on Saturday to give ample time for the creative process. I tried to reschedule but after its been published they don't let you have that option sooooo...I guess you all are permitted ample time x2 this go-round. I hope you'll forgive my boo-boo.

Happy weekend to all! I'll be sporadic as tomorrow I have a writing workshop to attend but I will be sure to read each of you as soon as is possible!

Thank you in advance for giving the form I created new breath with your own poems!! :)

The weekend schedule is a bit tricky, I know ~

Very interesting form Hannah ~ I will give it a spin, smiles ~

Many thanks for hosting the Sunday Challenge with your own form Hannah. I have been wanting to try this for a while now.

Yes, Grace I guess it can be!! Thank you!

You're welcome, Kerry and thank you for the opportunity to share this. I'm so looking forward to what you and everyone will write! :)

I've been wanting to give this a try since I saw it on your blog!

I thought if tried your form I would end up all nature and spirit like you. Maybe another time. Today the muses had something else in store for me.

I gave it a try Hannah, though not sure if it's okay..but I really enjoyed writing this...thanks for this wonderful challenge :)

At first, I thought I wouldn't have the mental discipline required to stick with a form like this. But things flowed much easier once i decided on my three topics. Thanks for sharing this challenge!

I've been so thrilled poets!! Thank you all so much for writing! :)

I wrote and I stumbled, Hannah. It was fun. For me the hard part was putting into words the transition to the metaphor. Thank you, Teacher.
..

Thank you Jim, for writing...I'm so glad that you stuck through it and that you had fun!

Incredibly challenging ... I gave it my best shot! This is going to take me a bit of practice ... thanks so much Hannah.

Hannah, great form!! Mine boomeranged but not in metaphors. I gave it a shot though. I have to get it together. Helen challenged me to write one before this challenge went up. Hoping to do it better next time.

really enjoyed this form Hannah! I think Im a little late in posting this.. i hope you like it!!

You all are doing such spectacular writing with this form! It has been such a treat to read you all!! :)Thank you!

LATE - so I also posted it in Mondays Open Link. Thanks Hannah for an intriguing form.