Hello Toads & Visitors to the garden!  I am happy to introduce to you the poems by Claribel Alegría.

Metempsychosis
If there is a return
my wait has been long
and if there is not
it has been barely
a sudden lightning flash.


–From Sorrow, by Claribel Alegria
Claribel Alegria was born to Nicaraguan and Salvadoran parents in Estelí, Nicaragua, on May 12, 1924. She grew up in the Santa Ana area of western El Salvador, and in 1943 she moved to the United States. In 1948 she received a B.A. in Philosophy and Letters from George Washington University. Throughout her life, Alegría has emphasized her commitment to nonviolent resistance, even during her close association with the Sandinista National Liberation Front (FSLN), the people’s movement that took control of the Nicaraguan government in 1979 and overthrew dictator Anastasio Somoza Debayle. In 1985, Alegría returned to Nicaragua to aid in the country’s reconstruction. 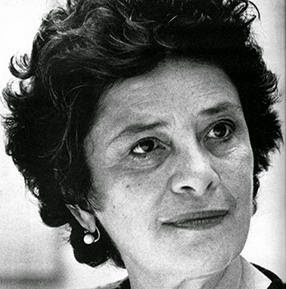 She has written nine books of poetry and prose. Alegria’s long relationship with her husband, Darwin “Bud” Flakoll – spiritual, extremely intimate, devoted to art and dedicated to humanitarian and social justice activities – started as a three-month fiery courtship and a quick marriage and grew into a rich, collaborative life of testimonio. Shortly before Alegria and Flakoll were to go on a trip to southern Asia in 1995, Flakoll passed away. Alegria traveled to Singapore, Bangkok and Jakarta with her husband’s soul, as she has said, and wrote her poetry collection, Sorrow, about that trip – and her posthumous dialogue with her husband.

The Rivers
The terrain in my country
is abrupt
the gullies go dry
in the summertime
and are stained with red
in the winter.
The Sumpul is boiling with corpses
a mother said
the Goascarán
the Lempa
are all boiling with the dead.
The rivers no longer sing
they lament
they sweep their dead along
cradle them
they twinkle
under the tepid moon
under the dark
accomplice night
they cradle their dead
the wounded
those who are fleeing
those who pass by
they grow irate
bubbling and seething
dawn draws near
almost within reach
the rivers are coffins
crystalline flasks
cradling their dead
escorting them
between their wide banks
the dead sail down
and the sea receives them
and they revive.

Rain
As the falling rain
trickles among the stones
memories come bubbling out.
It's as if the rain
had pierced my temples.
Streaming
streaming chaotically
come memories:
the reedy voice
of the servant
telling me tales
of ghosts.
They sat beside me
the ghosts
and the bed creaked
that purple-dark afternoon
when I learned you were leaving forever,
a gleaming pebble
from constant rubbing
becomes a comet.
Rain is falling
falling
and memories keep flooding by
they show me a senseless
world
a voracious
world--abyss
ambush
whirlwind
spur
but I keep loving it
because I do
because of my five senses
because of my amazement
because every morning,
because forever, I have loved it
without knowing why.

She confesses in an interview, "Since I was very young the two main themes in my writing have been love and death. When I was young, however, death was distant. Now death is near, especially since Bud passed away. Now death is my friend. I speak to her."

The challenge is to write a response to Claribel's poems by writing a new poem or prose poem.   Some examples of responses are affirming what the speaker said or using her title or verse as jumping board of your own work.   Please link a specific post to "Mr Linky" below and visit your fellow writers.

Wishing you all happy weekend ~ Grace

It is always exciting for me to be introduced to a new poet. Thank you Grace.

Beautiful poetry, Grace. Thank you for the introduction to such a distinctive voice.

You are welcome Kerry, HW & Helen ~

I look forward to reading your work ~ Happy weekend to all ~

What talent with words filled with grief. The poem nicks a place in your heart and sorrow begins to flow like blood from a wound but you keep reading.

I will try to contribute.

I'm listed. I'm not sure if you wanted style or form but I have posted sadness.

Thanks Gail, any form or style is fine ~ I am still writing mine, smiles ~

This lady is great! Wow. The last poem you posted moved me toward a sonnet dedicated to her, though nothing more ever needed to be said, really. Thank you, Grace.

A great prompt and a topic I have been focusing on this week. I shall give it a whirl tomorrow, kids. My brain has checked out for the night!

I find her fascinating! Thank you so much for introducing her to me.

Very late here--will be around tomorrow to read.

Rain was such bequtiful poem... Its probably all that can inspire me right now too... Its been raining here continuously for past 48 hrs... Thank you grace...

Speaking of Nicaragua, our immigration issue here, has become an embarrassment without the understanding and sensitivity of Alegria’s
pieces.
ZQ

Her poems seem to first arrive upon the broken wings of sadness, and yet by the last line one it's all washed away, and a new, freshness wraps around us.

I lost my baby brother 17 months ago. It still seems unreal... Maybe that's the reason why I often speak to his memory. I write to him, too.

Alegría's poetry speaks of a kind of sadness that becomes a necessary light. Bittersweet is often overused, but appropriate for the emotions evoked by her poetry.

Such a beautiful voice from a poet I was unfamiliar with. Thank you for the introduction Grace!

Here, just before my midnight.

Thanks to everyone that has linked and shared their beautiful work ~

I'm quite late, i like this prompt a lot, so i'm posting its Tuesday

i've written in a form called The Puente

Thanks for a very interesting prompt