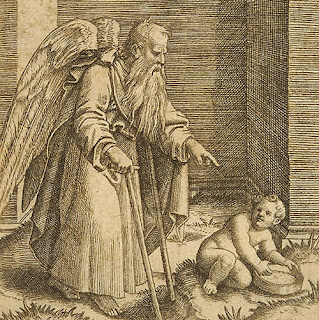 For the past month I’ve been re-reading (slowly, slowly) James Hillman’s 1967 essay “Senex and Puer.” In it he examines the psychological, cultural and mythic split between father and son, old year king and insurgent, babycheeked New Year, brooding Saturn and quicksilver Mercury. The essay dates to a surgent time--carpet bombing in Vietnam and rioting in Detroit, the first human versus computer chess match and the Summer of Love on Haight-Ashbury. One side was training thermonuclear missiles on the end of history while the other sang gloriously of the dawn of Aquarius.

Time was of the essence, and the times were speeding fast away; without a way to name them, hold them, ensoul the split and find a way for psyche to hold the divides together, Hillman (echoing his great influence, Carl Jung) felt humanity risked the cataclysm of primal relapse:

To have no real contact with the forces that are shaping the future would be to fail the kairos (timing) of transition. To come to terms with the kairos would mean discovering a connection between past and future. For us, as individuals, makeweights that may tip the scales of history, our task is to discover the psychic connection between past and future, otherwise the unconscious man within us who is as well the primitive past will shape the historical future perhaps disastrously. (Puer Papers, 4)

Without that contact, that conversation, that conversion into puer-et-senex—some union of sames—King Lear mads England, Prospero locks Ariel in the tree and the Wizard of Oz remains a tipsy, zippered Hollywood trope with no real gizmo for futurity and no balloon back to Kansas.

I first read this essay back in 1990, early in my post-rock n roll adulthood, a personally flowering time of the mind. (I also started a daily work of writing poems.) Back then I found the passages on the brooding old senex most fascinating. I yearned so become my father’s son by becoming my own man, about a work as substantial as his.

I’ve reread the essay several times in the subsequent decades, and the physic offered by naming the problem of senex and puer and then suggesting a way to heal their split with mythic approaches to therapy has always been meaningful.

On this reading, I found the passages on the puer more compelling; I see the eternal youth in my father as his life winds down, an energy and vitality which is timeless, soaring, heady—not much fucking good in earthly affairs (like marriage and family) but ever-eager to walk with the stones.

More than that, however, the present moment yawns diabolically wide.  What is it when the sides get so far apart they are identical in mood of ferocious opposition? Like faces so close together, they stare in hostility at both future and past. How can we back down from our positions when we are so blindingly right?

One great point HIllman makes is that while the alchemical union of male and female, spirit and soul is the royal work of our individual psychologies, there is also a union of sames, between the split ends of the spirit.

The union of opposites--male with female--is not the only union for which we long and is not the only union which redeems. There is also the union of sames, the re-union of the vertical axis which would heal the split spirt. Adam must re-unite with Eve, but there still remains his re-union with God. Still remains the union of the first Adam at the beginning with the second Adam at the end of history. This division, experienced as the ego-Self split and the chasm between consciousness and the unconscious, is in each of us the unhealed heart of the process of individuation. No wonder our theme is so charged, that we cannot take hold of the senex-puer problem anywhere without getting burnt; no wonder that it cannot be fully circumscribed or contained. It cannot become clarified, for we stand in the midst of its smoke. Its split is our pain. This split of spirit is reflected in the senescence and renewal of God and of civilization. (34)

Now, when divides in our culture are wider than ever—seemingly between an aging white male world and a vibrant multiculturalism much in its youth—I wonder if we’ve learned anything about the split spirit and its healing which may be useful for the tribe.

As we approach the American celebration of the father (a dubious and confusing and somewhat tepid holiday, compared to the maternal sobfest of Mother's Day), what does that figure say about the nature of our personal and collective self-division? How are father and son split? How is the father missing in our culture, what of his initiation and maturity and growth and wisdom has been lost?

Who are the fatherless flying boys with their mother-complexes and addictive refusal touch the earth of the real love or experience the wounds of growing up? What is it when our ranks are filled with aged perpetual youths?

Who are the senexes guarding the gates, spiteful of the young (remember, Saturn devoured his children) and locked in sterile rooms of melancholy and depression? What of the bad daddies with greedy, youth-devouring sexuality and unfettered #metoo! license? What of all the unfathered, ever-adolescent sons lost in a woman's fantasy image?

What of the white male patriarchy and its stubborn dominion?

How does all this compare to the divide in the soul between mother and daughter?

And heavens, where do we find evidence of a healing between generations? What does that mean for our world, and where to we go from here?

Tomorrow is Father's Day—let's foreground it on this Eve with all the paternal resonance we can summon. I look forward to your verses and excurses and speedy Pop hearses!


Imagined By Brendan at 12:00 PM
Email ThisBlogThis!Share to TwitterShare to FacebookShare to Pinterest

As usual a challenge that carried me deep... love this.

Kids, my poem is likely not within the parameters of this prompt. But it is about fathers and sons and it is father's day, so I will link it, with apologies to Brendan. This is what is happening in my village right now. Living on the sea, these sorts of things happen from time to time. The village comes together powerfully. But we are all heartsick at this moment.

That was a tough one to write, not without a tear or two.

Hi Brendan, I very much enjoyed your prompt. I have to confess to having heard more about Hillman than read, as I can be a little bit lazy intellectually, but this was very interesting.

I have edited and reposted a poem; I don't know that it fits the prompt, but I like the poem a lot and when thinking about the prompt, looked at this one again. Anyway, thanks and enjoy the day.

I just don't have anything... my Father died recently and I did write a few poems. I am pretty empty inside when it comes to him - so I will read everyone's and skip this prompt as (for now) I don't like writing depressing poems - and I wouldn't want my feelings (with my mom still alive) out there at this time. And I don't really know how to express them. So... I'll be visiting everyone else and feel blessed my husband is a great dad! :)

A very "touchy" subject it seems, upon reflections, really. Which explains my hesitancy to write to it. But since I don't "do Hallmark" and I don't mince words, I wrote to it anyhow. And well, I can't comment on the father-son relationship, and god knows I could write a lifetime on daughter-father relationships - but hey, forget psyche and all that for now - so straight up, no bullshit. And yeah, it is what it is.

Interesting ideas Brendan - thanks for hosting, and I do hope you find the peace and comfort you're seeking.

I'll eventually get around to reading the posts (although I've already scanned them) but you'll have to forgive me friends, if I choose not to comment.

Thanks all -- given the small response, this is obviously a touchy subject. Great poetry resulted from those who shared. Many more exciting prompts to come.

Sorry to be absent for this one, B. My only experience with father figures has not tended to lend itself to poetry much, and the whole father son thing is rather an alien one; tho surely there is some parallel between that split spirit in mothers and daughters, that is a rocky road too for me. Been a long time since I read Hillman--thanks for all the thoughts you brought up here.

I'm sorry to have been absent, Brendan. I was away this weekend but going to visit the dear pater in July. I may have a poem to write after that sojourn.

Ar present, Mr Linky is not showing up on my screen but I will visit to read as soon as I can.