Today I have another piece of physics to inspire your writing, and I thought I would tell you about the mystery of radiation. 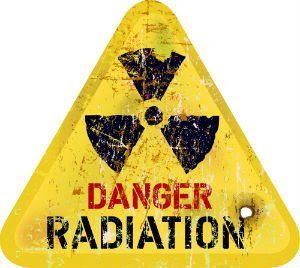 I would like to bring you back to the late 19th century where a husband and wife Curie discovered two new chemical element (radium and polonium). The latter of the element Marie gave its name from her native Poland.

They had been investigating the fact that the air become conductive when you are close to certain minerals. Today we know that the radiation ionize the molecule of the air so current can bridge the gap. This is used in the most famous instrument used to detect radiation, the Geiger counter (you have probably heard that eerie crackling sound that is an indication of radiation).

Along the way they discovered that radiation kills tumor cells faster than normal cells, alas it also causes cancer.

Today we know that radiation is caused by reaction in the atomic nucleus and come in three basic forms. Today we call the process decay, since a nucleus can be transformed from one element to another. You have probably heard about the half-life which is the average time until radiation level has halved. Material with a long half-life is more stable, but can remain lethal for many many years.

Alpha radiation - is actually an emitted hydrogen nucleus, and since it is a heavy particle it both causes the most damage but is easy to be blocked. If you get it into your body it is however extremely dangerous.

Beta radiation - is an electron or a positron being emitted (together with some other stuff). A positron is a positively charged electron and is an example of something called antimatter. Matter and antimatter will annihilate each other if they meet.

Gamma radiation - is electromagnetic radiation similar to light but much more powerful.

Today we know both of blessings of radiation but mostly of the curse and death that follows. We fear the fact that it’s invisible. It’s a ghost we cannot see that kills or make sick.

Today I would like you to use radiation or the stories surrounding it as inspiration for a poem. You can write about the scientists, the weaponry or uses. I think that radiation can be used as metaphor for toxic emotions.
Imagined By brudberg at 12:00 PM
Email ThisBlogThis!Share to TwitterShare to FacebookShare to Pinterest

I always love your physics challenges Bjorn. Regrettably, I will be away for the next ten days, visiting family so will not be able to participate, but I will definitely come back to this prompt and share it on a Tuesday later in the month.

Thank you for hosting.. and to all, have fun in the garden while I am away.

Thank you Bjorn. Lordy, I think I got rid of my toxic emotions years ago! I'll have to imagine a toxic character.

I will polish my entry a bit more and then come back to read...

Sorry Bjorn. I went with toxic emotions. Hope that is okay.

@Kerry I look forward to something from you... @Toni, these prompts can be interpreted quite widely

Well, the toxic part for me cam quickly. lol Love the Prompt!

Great to have you Susie...

Wow, I had no idea Marie Curie died of aplastic anemia. I had this illness, but am lucky enough to live in a time when it can be cured with a bone marrow transplant. I'm now five years post transplant and AA free.

Nice to know Romana that you are free of AA. Incidentally my PhD research topic is on AA (recently submitted the thesis). I pra that no one ever be inflicted with this disease.

Thank you for doing this research--it will save lives. My AA was idiopathic, though my doctors kept asking me to 'remember' an instance when I may have been exposed to radiation. All I could tell them was that it was possible. I grew up in the Soviet Union, about 400 miles from Chernobyl, so who knows what the wind and the rain brought our way? Also, my uncle died at 24 from kidney failure after being exposed to radiation while serving in the soviet army. There were all kinds of shenanigans going on during the regime--who knows how many regular people may have bene exposed to government-led scientific experiments?

My work too is on acquired (idiopathic) aplastic anemia. The doctor was very right in asking you about the incidence, as we too ask our patients as what might have happened with them that might have triggered their AA.

Chernobyl could be one of your reasons, no doubt in that.

Such an amazing and terrifying connection you describe here. I do remember Chernobyl so very well. The downfall in Sweden was quite high, and the first alarm of radiation outside Soviet was actually from a Swedish Nuclear Powerplant where they first thought we had a Swedish leak.

Thank you, Sweden. It may have been worse, hadn't they noticed it.

I remember adults being scared. As a child, you don't want to see your parents scared. The memories are fuzzy, but I don't think we knew immediately, as there was a state-wide cover-up.