Have you ever wondered if there is someone who looks just like you, but you've never met them? I've been told numerous times I have a twin. Well, not an actual genetic one, but someone who bears a strong resemblance. I've yet to meet my doppelganger.

Of course there are those distant relatives living and deceased who have marked resemblances to yourself or another family member. My youngest daughter, Carrie, bears an uncanny resemblance to Cher. There is a genetic connection because Cher's mother and my father were distant cousins. Carrie doesn't always look like Cher. It can come in the tilt of her head, a smile, or her theatrical ability to slip into a character. 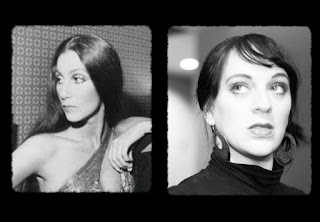 Doppelganger literally means double walker. There have been numerous references to them throughout history. They have been referred to as ghosts or the speculation we humans are time travelers. In this picture my husband Charlie was eighteen years old on a family vacation. He is on the far left with a girl standing behind him. One day he was looking at the picture and called me to come look at it. We both agreed the girl standing behind him held an unsettling resemblance to Dawn when she was seventeen. Is it possible? Is he playing ping pong with his daughter who traveled back to the future? 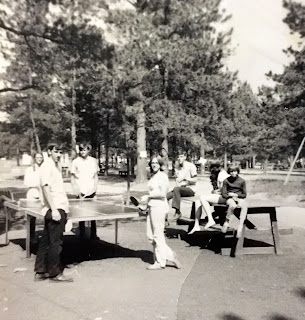 For today's challenge I want you to write about an encounter with your doppelganger/time traveler. It could be a painting, a photo album, a magazine, or face to face. Meet him/her in whatever circumstances your imagination creates. Please make sure it is a new poem, post it on Mr. Linky, and visit your fellow poets to discover their responses to their double walkers.
Imagined By Susie Clevenger at 12:00 AM
Email ThisBlogThis!Share to TwitterShare to FacebookShare to Pinterest
Labels: Bits of Inspiration

Susie, a fantastic prompt. It intrigues me. I will be traveling tomorrow, so will be late posting. Love the conversation about Charlie playing ping pong with his time traveling daughter. Wow!

Well, look at that. One just popped out. Lol. Not great poetry, but from my heart, with wolfish tears.

An exciting but difficult prompt to start with. I didn't know what to write and then, all of a sudden, it was there in a rough form. I just had to organise it a bit!

Thank you for the prompt, Susie! I'm fascinated with doppelgangers.

Nice prompt, Susie. I too am told I have a look alike. A notorious Hoistom person they actually mistake me for. Ones who can't recall or figure out who I might be say. "Oh yes, that's who." He's regularly on TV.
BTW, I think your photo may have been taken in Herman Park.
..

Fun prompt Susie. My doppelganger is on the Food Network every Saturday!

@Sherry, I find my own Real Toad challenges are the toughest for me to write. I'm looking forward to seeing what your muse brought.

@Kim so glad something came to you. As I said to Sherry, my own prompts are the toughest for me.

@Great Romana, so glad you liked it!

@Jim, Oh wow, that is so cool. The photo was taken in Colorado, but I can certainly see where you might think it is Herman Park.

@Toni Oh Wow! That is awesome!

I found my doppelganger in the least expected place, and it was a given name from a management course I attended years ago.

This is a really interesting prompt, Susie. I will catch up on my reading over the weekend, having endured a hellish week at the coalmines...

@Priscilla, what an interesting place for you to live in. I've lived so far away from the majority of my family I'm not sure they would recognize me.

@Bjorn, I was really surprised at who others felt was your doppelganger.

@Kerry, I hope next week will be much better for you.

Sorry everyone and Susie.

This is a wonderful prompt - really fascinating a concept, and who hasn't thought about this, or had some real life experience of some kind that brings this up .... but it's also a bit hard to figure an approach - so hence, I'm late!

Anyhow, the idea was hanging out in my head, and as I was writing to another exercise\prompt, it all came together - so I figure it's worth sharing here - which is an exercise in "duality" ...

and for those who might be tired of playing cross-platform - I have two links (one for Blogger + one for WordPress) if it makes it easier. Same post - different platforms.

Your daughter does resemble Cher! I just couldn't come up with anything and am off to the barn now.. but will be back Saturday morning to visit and comment as I find this subject fascinating. I will continue to play with the theme but I already wrote one (kind-of) about my sister who died - and she looked like me. It isn't a new poem...