Some time back, in 2014, our Toad-friend Hannah Gosselin created an interesting form that I like very much, called the Boomerang Metaphor Form. She began with the "This poem is - " format, and added some intriguing features, in which the first statements are expanded in separate stanzas, and then boomerang around to be repeated  at the end. Here is the premise, as described by Hannah:


Boomerang Metaphors
* Create three, “This poem is a ____,” statements.
* Support each statement in separate stanzas, (one can choose the length of the supporting stanzas and whether or not to rhyme or employ free verse).
* Restate the statement that’s being supported in the last line of these supporting stanzas, (as mini boomerang metaphor refrains).
* Then name the list of three, “This poem is a _____,” statements again as a boomerang metaphors closing refrain.
Note: One may choose to state the closing refrain slightly morphed but mostly the same. As it seems, words that go out into the world do tend to come back touched – slightly transformed.
* The title encapsulates the three listed elements, “This Poem is a ____, ____ and a _____”


Hannah's brilliant example of her first boomerang poem is sadly not available, as her blog is now private. (I miss her!) So here is my version, to give you a general idea: 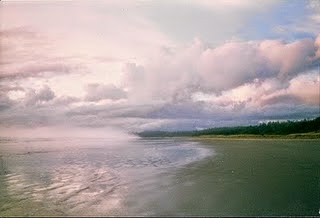 THIS POEM IS DAWN, A SKYBIRD AND A GREY WHALE,
SPYHOPPING

This poem is misty with early morning fog.
It drapes shawls over the shoulders of
Grandmother Cedar so she won't be chilled.
This poem loves the morning.
It looks to the sky to see all the colours of the day.
This poem is the breath of dawn on a windswept
morning at the edge of the sea.

This poem is a tiny bird who makes her nest
deep in the forest.
This poem must fly great distances,
out to sea and back again,
in order to find sustenance.
This poem sometimes grows tired,
and in need of rest.
Its perch is precarious,
its nesting sites vanishing
along with the old growth.
This poem is sometimes in need of
rescue and protection.
This poem is a murrelet on the wing.

This poem swooshes up in placid waters,
takes a look around with her wise old eye
and finds that life is good.
This poem is an ancient voice;
she speaks with an old soul.
Then this poem does a series of dives and breaches,
just for the joy of it.
This poem is a grey whale, spy-hopping. 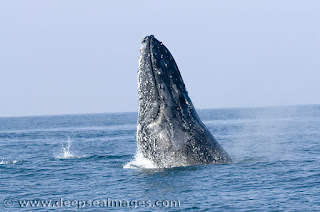 Well, that is the general gist of it. Smiles. Take a run at it, and feel free to improvise and make it your own. As always, if you don't feel like tackling the whole form, feel free to try another angle. Some people like to simply begin "This poem is -" and proceed from there.

The main thing is to enjoy the process, whatever you choose to do. Remember, I'm not strict!

Let's see what we come up with.

Imagined By Sherry Blue Sky at 12:30 AM
Email ThisBlogThis!Share to TwitterShare to FacebookShare to Pinterest
Labels: Wordy Thursday with Wild Woman

Hi Sherry. This is a favourite form. I always love to see how the images develop over the course of the poem.

Oh, I remember this format and really enjoyed it! Thank you. I miss Hannah as well

I enjoy this form too. One of my favourites. I am looking forward to what we come up with.

I am not sure if I got this right. the poem is much longer than I wanted it to be as I am cutting down on excess words in my poetry. Thank you Sherry for this prompt.

Toni, it can be whatever length it needs to be. Mine is rather lengthy too. Thanks for tackling the form! Going right over to read!

I don't think I've tried one of these before - I enjoyed writing it! Thank you, Sherry!

I missed the final stanza out but, when I went back just now to add it on, it didn't seem right, so I left it off!

It is fine to adapt it, Kim....sometimes a poem needs to be what it needs to be. I am so happy you tried the form, it can seem daunting, till one actually does it.

“Hello everyone!! It’s so good to be back in the garden...thank you, Sherry for boomeranging this form back into life! Your poem is such a visual treat...causes me to want to be the whale and see from its perspective.

I will come back and read on fresh eyes in the morning. I had a busy day!

Finally I finished. My metaphors, if you can find some are weak. Hannah, I hope you read our works, I too miss you. Thank you Sherry, for bringing this form back. I've used it, kind of, and did write for Hannah back then.
..

I never can resist this form. This time I have made some slight variations to it, however (e.g. in title for starters).

Jim, Hannah said she'll stop by tomorrow. Thanks for giving This Poem a whirl. I read your earlier one too, and really enjoyed them both.

Rosemary, how I loved your Goddesses of Shining Light. My friends, each of your poems absolutely delighted me. What a feast of beauty! I think Hannah is going to be a happy girl. My thanks to each one of you.

Hello everyone!! This is a test comment...I'm hoping I remedied the issue from last night! Fingers crossed and I'll be making my rounds with a fresh coffee to read each of you...feels like home! I love it...smiles. :)

I'm making some tea and sitting down to give this form a try. It's so exciting to open up a blank word-doc(!!) as all of my writing these days have been in journals. I just counted and I've completed five and on my sixth one since 2016. I didn't realize there were so many but I thought you'd all like to know that I've still been writing.

HANNAH! It is so lovely to see you, and to know you are still writing. I know you always will. You have a gift. In busy years, when kids are young, sometimes poetry is catch as catch can but the neat thing about it is the words are always there waiting, whenever we turn back to them. I have written more in old age than in my entire life before. But dont wait that long. The world needs your beautiful poems. Smiles. Thanks for stopping by!

Thank you, Sherry!! You cause me to feel so wonderful and valued for my words...truly special and my world is more rich for having your words in my life as well I'm glad you started to write again!

Wow! That post was difficult...Wordpress has changed some and it took some trial and error to get some features to work! Feels good to post for the first time in three years though, (jeesh, time flies!).

I cant believe three years has gone by so fast! Yikes! Thank you so much for stopping by, Hannah........there are such lovely responses to the prompt.......I am thrilled, and so happy you stopped by. I would love to read what you wrote - is that possible? If you want to share it, would it fit in a comment box?

Oh, I looked at the comments first, before checking the linky. YAY! Going there now! THANK YOU!

Sorry so late to the party. I am still under the weather, but trying my best to 'poem' through it! Thanks for a fabulous challenge Sherry.