Wordy Thursday with Wild Woman : Being a Woman in Times Like These

The noted Canadian writer of poetry and prose, Margaret Atwood, is the award-winning author of forty works, including fiction, poetry and critical essays. 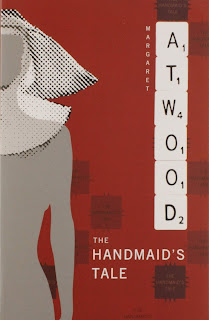 Perhaps  her most famous work is  The Handmaid’s Tale,  written in 1985 and now considered prophetic, which was made into a popular television series. This work is a dystopian view of a regime that is extremely oppressive to women. A famous quote from the film speaks of “making things better,” tellingly explaining, “Better doesn’t mean better for everyone.” I’ll say.

The setting is near Boston in the U.S., with Canada portrayed as the only hope of escape. Not so far from today’s reality, in my opinion, though Canada has its problems, too. Recent U.S. legislation affecting women’s reproductive rights makes this projected vision of a dystopian future seem dangerously close.

The Handmaid’s Coalition was formed in 2017. Activists dressed in the signature red cloaks and white hats lobby and protest, serving as visual warnings that the rollback of womens’ hard-won rights and freedoms will send us back decades, creating unthinkably hard lives for women and girls. 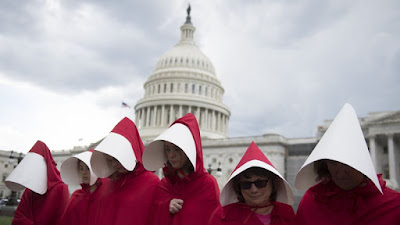 To write from the viewpoint of a man or woman living in the times depicted in The Handmaid’s Tale.  It feels freaky, how close we are to entering this reality. But we won’t go quietly. Hell, no!

If you aren’t familiar with The Handmaid’s Tale, write from the point of view of a woman living in – or escaping from – oppression or abuse. Perhaps a woman in your family history - or you yourself -  has an amazing story.

Write from the point of view of a man whose familiar world is falling apart as his wife joins the womens’ movement. (He may be sympathetic or opposed.)

We do not intend this to become a political argument. Let's reflect, rather,  on  women's hard-won rights, how long women fought to gain them, and how easy, apparently, it is for them to be lost.

Hi kids, here, we are still shy of midnight, so there will be sleeping happening before i come back to see who will take the plunge into dystopian times. Smiles. Am looking forward to the tales.

Loved the prompt, Sherry ❤️ I chose to write from the point of view of a woman living in – or escaping from – oppression or abuse. Happy Thursday everyone ❤️

I have revised an older poem, written several years ago when I first read The Handmaid's Tale. I am not entirely happy with it yet.. but I want to add my voice to this prompt which is ever so needful in the neo-patriarchal world we are living in.

I have been in two abusive relationships, was a young woman during the years when women's liberation was happening,along with my own, and am alarmed at women's rights being rolled back to the 1950's and the resurgence of patriarchy in the U.S.A. i look forward to reading your poems. Thanks for joining in.

Sherry, your prompt is contagious (in the best of ways). Earlier, after reading Rommy's poem, I stopped by to let you know just how awesome I thought the prompt was. Then, while lurking... I read Kerry's comment and couldn't keep from writing a wee piece. Thank you for the inspiration. I would not have written anything today. I was too tired. But I'm temporarily energize and looking forward to reading everyone's contributions (as well as catching up with past readings *cough*).

I have been watching with trepidation the events unfolding in the states. Watching the news it's hard to believe we're in the 21st century.

I agree, Lori. I simply cannot believe what is happening and that so many stay silent and let it happen. I am heartened by each voice raised. But really we need millions - to VOTE for sanity and human rights next time at the polls. Or we are lost.

Nice prompt today, very appropriate for our sad time. I may have stepped out of bounds today, I sincerely am with and for the ladies all the way. Even as a man I have been harrassed in my younger days, fortunately only touched one time, at a bus depot.
My prayers are for Roe to stand, I feel God knows it is right and well conceived. He has protected it for soon 50 years.
..

If there is reincarnation my wish is to be a woman born in a safe haven
..

Well, Sherry you brought out my teeth with this prompt. Thank you for giving us a platform.

Jim, I LOVE that you responded to the prompt. I know you as a very sympathetic soul. Susie, I LOVE your teeth!

Hello... it's late here. I joined with the perspective of a man who is never seen in the Handmaid's tale.

Will be back to read tomorrow as it's getting late here.

Bjorn, I am so happy that a couple of brave men wrote in response to this prompt. I cant wait to read your poem. And I know some men who never appeared in The Handmaid's Tale, thank heavens! You among them.

Ah, I meant men of honourable and gentle hearts. I see you wrote about men all sent off to war. May we never see those times though it feels like we are edging closer with every week. Thank you for your poem, Bjorn. You captured those times so well.

Challenging prompt Sherry. It took me to a mtaphorical abstraction of hope as a fragile glass orb. Hmmm...

I feel hope is just that fragile in these times, Rob, and am glad you wrote to this prompt.

I will not link my poem to this prompt as it isn't from the Handmaid's world's perspective... but I did write a poem in reaction to what I am feeling. I believe the only thing that might be taken away from women is the freedom of abortion. I am 100% pro-life and my poem is a reflection on that. So if people want to flip over and read it, that is fine, but I think my voice will make some angry and again, my poem didn't follow the prompt. But the prompt made me think about the issue. Thanks, Sherry.

...and want to add I am proud of the states that are making it illegal. An "abortion" can always be had in case of true medical emergency. That has been and always be.

Thanks for your comments, Margaret. I will come and read. This topic is on many minds right now. The power was out for a few hours, so i am a bit late getting around.

Hello Sherry And All- Compelling prompt Sherry. I had to sleep on it. I have never seen The Handmaid's Tale, but now I want to. I wrote from my own experiences. Posting soon.

I am looking forward to reading your poem, Linda.