Music, Gratitude Edition: A Walk On The Wild Side

Dear Toads, you probably know that since our last music prompt, we lost the patron saint of freaks and weirdos, poet laureate of the streets of New York, lover, preacherman, and tai chi master who really needs no introduction: LOU REED. 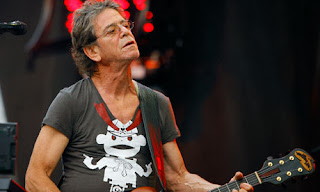 If you haven’t read Laurie Anderson’s obituary, and her tribute to him in Rolling Stone, you should. I wish I had known about the tribute that happened at Lincoln Center just a few days ago.

Love has gone away
and there's no one here now
And there's nothing left to say
but oh how I miss him, baby
Ah baby, come on and slip away
come on baby, why don't you slip away...

Please link up a new poem inspired by Lou Reed, the Velvet Underground, “Street Hassle,” the bowels of New York City, or what have you. Please keep your attention on Lou’s work for this prompt, as (spoiler!) next time, we’ll turn our focus to Laurie Anderson.
Imagined By Marian at 12:00 AM
Email ThisBlogThis!Share to TwitterShare to FacebookShare to Pinterest
Labels: Music with Marian

Perfect Day is one of my all-time most memorable songs. (And Laurie Andersen defined a year of my university life.) I hope to get to this challenge in the mad rush of preparing for my 2 weeks away this weekend.

i thought about Perfect Day (and several others) for this prompt, but wanted to go with maybe something a little less widely known. the "Street Hassle" video is a bit of an investment, clocking in at 11 minutes long, but it's soooo epic, i hope everyone has the chance to watch if you aren't already familiar. or even if you are.
(also Perfect Day's been used for this video game commercial i've been seeing over and over (online) that shows car racing, soldiers killing people,and warrior-ish scenes and that's just really disturbing. argh.)

When I "discovered" Lou Reed and the Velvet Underground in high school, I was forever changed. The stories he told with his songs made me want to know those people. I'd never seen "Street Hassle" before, so I really enjoyed that. It was cool to hear Bruce at the end of it too. You can hear Reed's influence in his early work.

Her tribute is so moving. I didn't know they were together until news of his passing; though I listened to both of them in my 20's, had moved away in recent years. Time to revisit.

Love that line of Laurie's: "que es mas macho? School bus, or lightbulb?" It's so nonsensical, yet grounded in the quotidian. And for me, too - Perfect Day. Saw Lou play once around 1989 in San Francisco - some VU, some of his old stuff, but mostly his newer work. He appeared more energized with that, though it was evident the crowd (me, too) wanted the classics.

love these poems, Toads. really perfect. i like feeling a connection with you all.

Kay, your blog won't let me in! wah, i feel rejected. i love your poem. Loureedia? who knew! that's appropo, somehow. xo

Thanks for this Marian.

you're welcome! i know it's a super-busy time, so i'm thrilled for these responses. be well, everyone!

Lou was an Icon for sure.
Rick, your latest follower.

a true "original" has left the building. RIP Lou Reid, your music lives on.