My youngest daughter, Carrie, is the business manager for The Guthrie Center in Tulsa, Oklahoma. The center houses the museum and archives for the American folk singer Woody Guthrie. On a visit this past October to see my daughter I was privileged to visit the center and I thought Mr. Guthrie’s life and art would be inspiring to those who visit and contribute here in the garden. There is so much to say about this man who was a songwriter, musician, singer, artist and author so I will only refer to his music today, but I hope you will read more about this multi-talented artist. 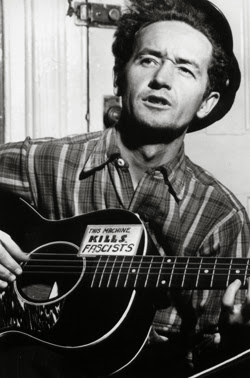 Woody with his iconic guitar. Photo by Al Aumuller.

Woodrow Wilson “Woody Guthrie (July 14, 1912-October 3, 1967) was an American singer-songwriter and folk musician whose musical legacy includes hundreds of political, traditional and children’s songs, ballads and improvised works. He frequently performed with the slogan This Machine Kills Fascists displayed on his guitar. His best known song is “This Land is Your Land.” Such songwriters as Bob Dylan, Bruce Springsteen, John Mellencamp and Pete Seeger have acknowledged Guthrie as a major influence. Many of his songs are about his experiences in the Dust Bowl era during the Great depression when Guthrie traveled with migrant workers from Oklahoma to California and learned their traditional folk and blues songs, earning him the nickname the “Dust Bowl Troubadour. 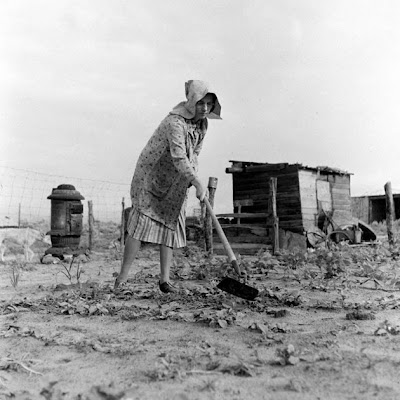 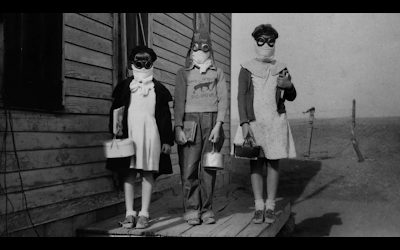 Woody Guthrie wrote “ThisLand Is Your Land” in February 1940 in response to being tired of radio overplaying Irving Berlin’s “God Bless America.”  His fourth and sixth verses of the song protested against class inequality.

As I went walking, I saw a sign there,
And on the sign there, It said "no trespassing." [In another version, the sign reads "Private Property"]
But on the other side, it didn't say nothing!
That side was made for you and me.
In the squares of the city, In the shadow of a steeple;
By the relief office, I'd seen my people.
As they stood there hungry, I stood there asking,
Is this land made for you and me? 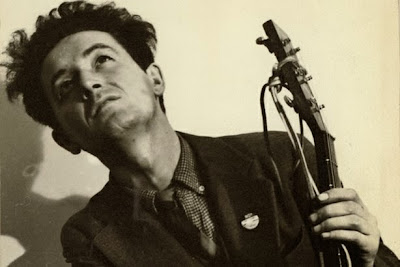 What a challenge, Susie. Woody Guthrie is a long time role model and hero of mine, from the days when I heard his songs performed in Chicago coffeehouses in the early Sixties. He is the primary reason I was drawn here to Oklahoma, where I've lived for the last few decades.I've written several things about him in the past--will see if anything bubbles up today from the cauldron, which has been fairly empty of late. Thanks for the link to the documentary, also--it's an excellent one.

Of course I'm well familiar with "This land is your land.." but I never knew anything about the writer. I have been fascinated with 'Dust Bowl' lit since reading The Grapes of Wrath - what a bad time to be poor and American.

Many thanks for featuring this artist on RT.

I always can find things to protest about. This one didnt come out in the voice of Woody Guthrie, just a tired Grandma's who can make little sense of many of the Happenings on this old planet.

We heard his son Arlo Gutherie perform here in a med sized venue last summer with friends. I think the whole audience had gray or white hair or at least gray or white roots. The show was a tribute to Woody's songs--including "This Land is My Land."

Cool, Susie. I have a world of protest in me, but opted to make a Guthrie-style rallying cry. I've got a banjo strumming in my head today.

I knew of Woody Guthrie before his son Arlo's singing career ever began, so I love this prompt, Susie.
I was mistaken about something, however, and I guess my father made the same mistake, because he told me Woody Guthrie wrote Big Rock Candy Mountain. Not a terrible mistake, but I was just surprised when I checked his "songography" (a word my father probably never knew).
Well, I'm pretty passionate about a lot of causes, but I don't know if I can match the immortal Woody.
K

Woody Guthrie and son, Arlo, have left a mark on American music.
If anyone is interested in a bio, there is a movie called Bound For Glory in which David Carradine plays Woody Guthrie.

'Bound for Glory' is a mighty fine movie! The Guthrie men and their music ... amazing! Thank you Suzy for such an inspiring challenge.

I am having difficulty with my post...it will only post in one big block...have tried for over an hour to find a way to correct it...will try later today to post again...
am enjoying the posts already up.
Peace
Siggi

Thank you Susie for illuminating the world of Woody Guthrie and the great prompt...

Will be back later - love this prompt, Susie.

For those of you who don't know Jonatha Brooke, she recorded an album based on Woodie's writings, with his family's assent. Truly beautiful songs here - worth buying if you can, or at least listening to.

Thanks everyone for your wonderful comments and information. I am behind on my own challenge and I need to write for it. Woody Guthrie was exceptionally talented in so many art forms. He truly inspires me to delve deeper into my own art.

Susie, so glad I came back "to earth" in time for this.

My poem is a different kind of protest. Woody Guthrie is one of my biggest heroes, and my friends The Burns Sisters are lucky enough to sing with Arlo on tour.

Guthrie told it like it was. And I'm hoping my offering is in that spirit. Thanks so much, and I'm glad to be back. Amy

I finally got my post up. It seems to have been worth the effort in my mind getting a start on some thoughts like these. Can't believe I was such a mouse for so many years.
Thanks for the interesting challenge.
Peace
Siggi

…mine is a bit "weak" as rant pieces aren't my strength. I am enjoying the other ones posted, though! We have some mighty powerful Toads out there! :)

Woody Guthrie's story is an interesting one. I bet he had plenty of stories to tell after his travels, and just by virtue of his life experiences.