When I heard the news on Thursday, December 5, that Nelson Mandela had passed away I felt an immediate and overwhelming personal loss and when I walked out onto our South African streets on Friday morning, I saw it in the faces of all whom I encountered. We seemed to be holding our collective breaths, unwilling to exhale if it meant acknowledging that such an iconic man had passed away from this life.

It was a testimony to his legacy in South Africa, that all the people who were at the marking centre where I have been working for the last two weeks, came together in respect and communal sorrow to offer up prayers in 6 languages, representing 4 religions: we are the people of a land so long torn apart by unnatural divisions, and that we were there, joined in brotherly love is a direct consequence of Nelson Mandela's life.

However, I am deeply conscious that Nelson Mandela did not just belong to Africa; he belonged to the world. He embodies the theory that one man can change the face of history, and his message has had far-reaching impact around the globe. His official Memorial held in Johannesburg on Tuesday, December 7, was attended by nearly 100 heads of state from around the world, among them US President, Barack Obama, who delivered a stirring speech: "We, too, must act on behalf of justice. We, too, must act on behalf of peace."

Nelson Mandela will be laid to rest in his home district of Qunu in the Eastern Cape, SA on Sunday, December 15. (News24)

With this in mind, I would like to dedicate our Sunday feature to the life and legacy of Nelson Mandela. This is not a prompt or a challenge in the usual sense. I leave it entirely open, for those who would like to participate, to share your thoughts in whatever form, theme or subject you feel moved to write. If you have written poetry inspired by Nelson Mandela earlier in the week, feel free to share it here again. I have added in the following words, spoken by Mandela during his life, in the hopes they may continue to inspire and uplift.


“During my lifetime I have dedicated myself to this struggle of the African people. I have fought against white domination, and I have fought against black domination. I have cherished the ideal of a democratic and free society in which all persons live together in harmony and with equal opportunities. It is an ideal which I hope to live for and to achieve. But if needs be, it is an ideal for which I am prepared to die.”

"No one is born hating another person because of the colour of his skin, or his background, or his religion. People must learn to hate, and if they can learn to hate, they can be taught to love, for love comes more naturally to the human heart than its opposite."

"Education is the most powerful weapon which you can use to change the world."

"One of the things I learned when I was negotiating was that until I changed myself, I could not change others."

"I learned that courage was not the absence of fear, but the triumph over it. The brave man is not he who does not feel afraid, but he who conquers that fear."

"A good head and a good heart are always a formidable combination. But when you add to that a literate tongue or pen, then you have something very special."

"To be free is not merely to cast off one's chains, but to live in a way that respects and enhances the freedom of others."

"Our children are the rock on which our future will be built, our greatest asset as a nation. They will be the leaders of our country, the creators of our national wealth, those who care for and protect our people."

"A society that does not value its older people denies its roots and endangers its future. Let us strive to enhance their capacity to support themselves for as long as possible and, when they cannot do so any more, to care for them."

"I have walked that long road to freedom. I have tried not to falter; I have made missteps along the way. But I have discovered the secret that after climbing a great hill, one only finds that there are many more hills to climb. I have taken a moment to rest, to steal a view of the glorious vista that surrounds me, to look back on the distance I have come, But I can only rest for a moment, for with freedom comes responsibilities, and I dare not linger, for my long walk is not ended." 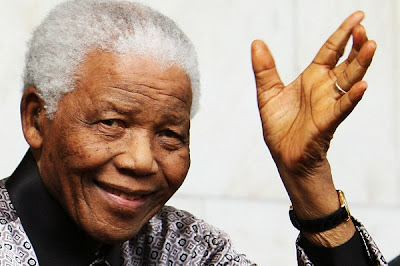 I have thought about you and your country a lot this week, Kerry. I haven't presumed to write anything about a topic this profound so far--it is daunting to even approach it, but I will see if I can't find at least a small corner to work with.

Above all, Mandela was a man of the people - he never set himself up as entitled, or as a crown prince. He only wanted people to be true to themselves and their country. South Africans never refer to him as Mr Mandela, to us he is Madiba, his clan name, or simply Tata which means 'father'.

Hi Kerry, I have been thinking of you a great deal over the last week also--it must be a very moving time there especially. Whew. You have written a beautiful post and tribute. I don't know that I'll be able to participate, but will certainly keep the words you've posted in my head and heart. Thanks. k.

I'm sharing what I had written on that day soon after I had heard of his departure via our network news here in the U.S.

Like how you mentioned how you walked out in the street and observed the faces of those who lived, shared and benefited from their co-existence with "Madiba"

Kerry, I've also been thinking about you since South Africa's Tata Madiba died. You are right, the lessons of his life belonged to the world, like Gandhi's, or like Mother Teresa's.
I thought of you working at the marking centre, and am so glad everyone there was able to share their shock and their grief. I'm glad you were not alone.
Love, K

Though I had known of your Tata Madiba's failing health for some time, his passing was sad .. and overwhelming. His words about children, missteps and older people resonate with me.

Thank you for sharing his great wisdom today ...

I am so happy that you are back!

Earlier today or yesterday you read the poem I wrote on the day of his death. I will re-post it here. He and his witness have been in my thoughts for years and my prayers over the last year since Egypt's latest revolution. I hold his work up not only for an ans to racism and oppression and new reconciliations, but also because we must remember ALWAYS that imprisonment is not the end of a person. In the United States, many of our prisoner may be seen as political.

Good to have your back Kerry! Such an amazing man worthy of all our best.

Powerfully written lead for the prompt, Kerry. You make the local global for us. Welcome back home to the lily pad.

I shared a link to this post and it was picked up by the online newspaper, The Gardening Daily. http://paper.li/GoodBlogPosts7/1316485015

Thank you Kerry for sharing with us!
I am fascinated with the way he handled himself and how much he was respected~ I will try to come up with something tomorrow~ I too thought of you. How sad for the world to lose a man of such integrity~

Hi all. Some of you have already read my poem, posted for the G-Man and dVerse on the 5th. Hope you have a good week ~ Michael

Hi kids, I have always known Mandela as Mandiba. I gather either Madiba or Mandiba can be used. Let me know if I am wrong, Kerry and I will change it. I have been overloaded, as usual, and thus thought I was incorporating the fact of this great man's death but it seems I was just delaying, as I so tend to do, recognizing the impact. This came today, when for the first time, I have had the time to absorb the loss into my being.

I have really been touched by the beautiful posts and heartfelt comments. There is a palpable sense of the spirit of goodwill moving around the globe: enemies shaking hands, stories being told, resolutions made. And so the Madiba magic continues to make a difference.

Many thanks to all.

Kerry, so glad you are back. i've been thinking about this and was sending love to you while you were away; not sure i'm up to this challenge in this moment. but who knows. just chiming in to thank you for the prompt and for you. xo

i shared a poem written by my friend Tommy Twilite. he's the founder of our local poets group. i was lucky enough to hear him read it earlier this week. i shared your tribute with Tom, Kerry, and he was moved so i suggested sharing his poem with our group.

Hey Kerry, mine is a bit discursive, I'm afraid--but what came to mind. Thanks. K.

I can't imagine how intense/poignant that prayer session was that you were a part of, Kerry. Wow.

Thank you for bringing us to such an important person this weekend. ♥

I look forward to finding time this week to catch up with reading… I realize I knew very little about this man's life after all. Will perhaps write a poem someday… right now I am reading about him. Will read the poem tomorrow.

@ Sherry, I have never seen or heard of Mandela being referred to as Mandiba - it is Madiba.

…my attempt. I feel totally unworthy.

He was certainly a giant among men. He will never truly die, for he lives in many hearts. My fellow Native Americans are grieving him, because he traveled to a continent that was not his own and condemned the treatment of the aboriginal people here. Despite the struggles he dealt with in his own home, he had room in his heart for other's struggles.

I didn't write a poem, but thank you for sharing the quotes and your tribute.

Thank you so much for posting this about Mandela. You are so right that we are lucky to have lived in his time and to see the amazing transformation in SA. You were one of the people I immediately thought of when I heard he died. I know I am late with this note but thank you.