Hello toads! This is Izy and Kenia, and we're here to share the outcome of writing together closing the month of celebrations of IGWRT first anniversary.

We were both so happy to be paired up for Toads in Tandem.  We had never worked together previously, and Izy had never even written a collaborative poem.  We had lots of fun discussing our project. We decided to go with a poetic urban intervention, after discovering we are both fans of Bansky and street art. The idea was to share the poem by leaving it in places where people wouldn't expect to find poetry.

We picked a theme when Izy described her recent infatuation with the show 'Doomsday Preppers': she had watched a few episodes online. "It's all about people who are preparing for way beyond realistic doomsday scenarios." She explained, "They spend most of their waking hours preparing for this inevitable big bad that they think is looming over their shoulders but will never really happen.  What if we approached it from the angle of love your doomsday, something that would make it okay to be at peace with the chaos?" Kenia was immediately in love with the idea, and we decided to go forward with the Love Your Doomsday theme.


So this is basically what the poem is about - a positive look into the end of the world. We took turns writing the stanzas. Izy opened the poem, and then the back and forth began. The poem has four stanzas that represent the four horsemen of the Apocalypse. We wanted to make it this meaningful. Kenia has printed 50 copies that she will continue sticking to lampposts, phone boots, walls, buses etc. in her surroundings.

Momma spent years waiting for the floods
which would split the roads open
and the fiery sky that would burn.
She lined the garage shelves
with cream of mushroom soup
canned green beans
and fried onions
enough munitions to make
green bean casserole forever.
In the gun safe, she kept duplicates
of all her John Lennon albums,
for when that final day turned to night.

Dad couldn’t care less about
the floods or the fire.
He  had a beer regularly
watched soccer religiously
cursed occasionally
and made plans for the unlikely future:
to mend the rain gutter
to replace the Toyota’s blown tail light
to mown the lawn.

At the dinner table, no one spoke
of the things we knew where happening:
the foulness of the hot wind which clawed
and banged at the shuttered windows without end,
the dimness of noon which grew only dimmer,
and the smoke that rose from the ground,
tarring the backyard an endless yellow.

We learned silence and resilience
performing our chores.
We learned the lines in our palms
and on one another's faces
they revealed roads we walked,
in good times and in bad.
I remember, we smiled.
The minute past,
the minute ahead,
in the blink of eyes
They are gone -
what in the world
is ours to keep?

And because we both love photography, you can see some of the places this poem visited. 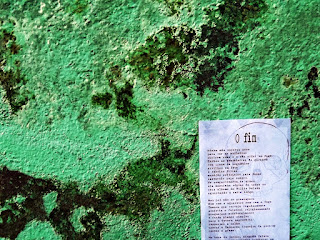 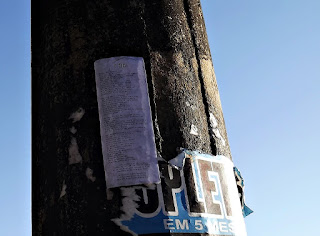 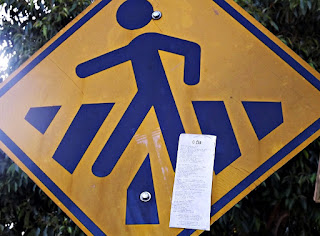 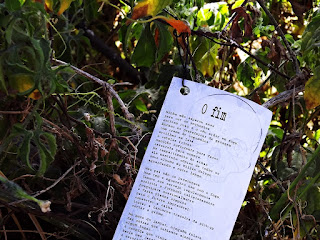 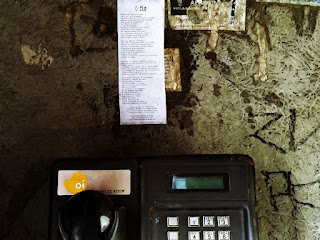 (more photo taken by Kenia can be found here) 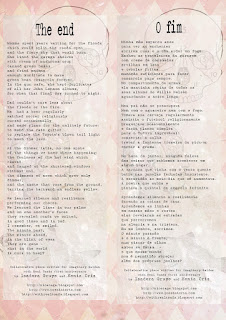 Imagined By Kenia Santos at 12:00 AM
Email ThisBlogThis!Share to TwitterShare to FacebookShare to Pinterest
Labels: In Tandem, Izy and Kenia

I so have those shelves full of mushroom soup!--I just wish I had a gun safe for my albums. I love the whole concept here--so very well delineated in the ending lines--what do we truly have?--only what we make of each moment. A seamless collaboration, and a fine (also fun)poem.

That is exactly right! I love the few words in each stanza which establish different points of view in this story for Mom, Dad, family, self, especially these lines that are almost our present, making the possibility more real:
"the foulness of the hot wind which clawed
and banged at the shuttered windows without end,
the dimness of noon which grew only dimmer,
and the smoke that rose from the ground"

Have you ever read "Armageddon Summer" by Jane Yolen and Bruce Coville? That is a Young Adult novel which explores similar dynamics.

I'm clapping my hands way over here and cheering for this bold pair of poets, intrepid enough to face doonsday with spirit and resilience. Despite the poem having been written by two people, the voice is so constant. I love how it is presented from the child's perspective (perhaps a young adult), who sees both Mom and Dad's differing responses, and what exists between, and out there, in the scary place where the world is becoming unseamed. This is so pertinent to our times, and I hope your words have impacted on those fortunate enough to see them pinned to bushes or stuck on street signs.
Altogether so cool... a brilliant conclusion to our Toads in Tandem features.

I'm also clapping for the same reasons as Kerry. She put it so well as to how this piece affected me and the active participation on pinning the message on bushes and trees and signs, etc.


Thank you Izy and Kenia

Oh, this is beyond cool!

I just love this... what a great apocalyptic way to end the month. I especially like the pinning of your poem in all the different places.

What an AWESOME idea: love your doomsday!!!! I wish that was a general prompt. Maybe it could be? This is so wonderfully executed, and the constant voice is seamless. Brilliant collaboration in every possible way and I love that you are leaving it places. Way cool!

What a great seamless collaboration. In a way it was my childhood except for my father didn't drink beer. Mom would rattle on about the worst of life and my dad buried himself in the paper. Again great piece!

This like the olympic synchronized poetry event....how can you top being one of the best poets that I know...stack another on top and force them to write a masterpiece. This had a 50's bomb shelter feel to it, Red scares and nuclear fall out. The backbone to a good movie really. Smart and smooth, loved it. Great job you two.

I agree with Corey. It made me think of bomb shelters, too.
I know there are people who do this, stockpile foods and other goods for the end of the world, as if they alone will be left alive, while the lilies of the field will perish.
It could have been such a sad poem, but it has a wonderful lighthearted lilt to it. I love it.
K

This flows so smoothly, it is hard to believe two creators worked in tandem. Excellent poem, with all the stuff that is stocked by actual people I know (add toilet paper).

Thanks for wonderful comments all. I bow here to kenia who made this so an inspirational and awesome collaboration. I left stacks of this poem at rest stops on my way to des Moines, however my camera has been stolen. I will recreate my poetry intervention on the nice cage when I am able. Again, Props to my partner in crime who brought such a stunningly optimistic and yet realistic voice to this piece

I love the idea and what you two did when your minds blended your thoughts~ Memories is what we have left... I love all the unique places and how you both stretched your wings! :D

Wow! You two were so ambitious and original and you rocked this collaboration! I almost missed it cos this week has been demanding at work, but I am so glad stopped in tonight. Best collaboration evah!

I love this you two!!! "Love Your Doomsday," is a brilliant title!!!

The poem is very uniquely written and I love the profound message held in the end...very well done!!

Super idea to post these poems around...I really like the fence one,with the shadow of the fence through the paper!! They are all spectacular images. What an awesome idea!!

What in the world is ours to keep?

And the opening line grabs me too! The humor is really quite ingenious as it plays off the all to real possibility of such an end happening! This is original and just perfect for a grand finale