By the time you read this, I’ll be out of my hole, headed to São Paulo, the largest city in Brazil, the largest city in the southern hemisphere and Americas, and the world's seventh largest city by population. It’s the first time I leave my State and never wanted to visit São Paulo (I’m afraid of metropolises), but circumstances are driving me there, so I’m trying to make the most out of this trip. Photos on my Flickr when I come back!

I picked a paulista (something or someone who is originally from the State of São Paulo) poetess to make you company today, because, well, it made sense to me! 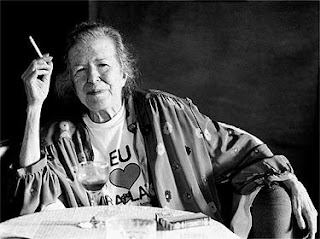 Hilda Hilst was born in 1930, she had a degree in Law but it was her love for poetry that fulfilled 50 years of her life living in a small farm in the city of Campinas (which I’ll happen to visit this weekend, too!).

I Come from Ancient Times
I come from ancient times. Long names:
Vaz Cardoso, Almeida Prado
Dubayelle Hilst… events.
I come from your roots, breaths of you,
And I love you tiredly now, blood, wine
Unreal cups corroded by time.
I love you as if there were more and derailings.
As if we stepped on ferns
And they screamed, both our victims:
Otherworldly, vehement.
I love you small like one who wants MORE
Like one who guesses everything:
Wold, moon, fox and ancestors.
Say of me: You are mine.

She collected some of Brazil’s most important literary prizes and shocked society in her days by often tackling polemic issues in her poems.

While I write a verse, you surely live.
You work your wealth, and I work my blood.
You will say that blood is not having your gold
And the poet tells you: buy your time.


Ponder your hurried life, listen to
Your inner gold. I speak of another yellow.
While I write a verse, you who never read me
Smile when someone speaks to you about my verse.
To you, a poet is like an ornament, and you change the subject:
"My precious time cannot be wasted on poets."
Brother of my moment: when I die
Something infinite also dies. It's hard to say it:
A POET'S LOVE DIES.
And this is so large that your gold cannot buy it,
And so rare, that the smallest piece is so vast
That it doesn't fit in my corner.

May this love neither blind me nor follow me.
And may it never notice me.
May it spare me from being pursued
And from torment.
From only being so that he knows me.
May the gaze not lose itself among the tulips
Because such perfect forms of beauty
Spring from the glare of shadows.
And my Lord inhabits the glimmering dark
From a clutter of ivies on a high wall.


May his love only make me discontent
And tired of tiredness. And may I
Shrink before so many weaknesses. Small and soft
Like spiders and ants.


May this love see me only in parting.


"My poems are born because they need to be born. They arise from inconformity. From the desire to surpass Nothingness." ~ Hilda Hilst

Today's challenge asks of you to write to inconformity. Go either political or social, open the newspaper or watch the news and  find an issue worth turning into a poem. (I'd very much enjoy knowing what news it was.) If you don't follow the news, write about a local problem you'd like authorities to solve, or about a global problem, such as hunger or slavery. Link your poem below and don't forget to leave a link to The Real Toads in your blog. Happy writing! See you all on Monday!


Imagined By Kenia Santos at 12:00 AM
Email ThisBlogThis!Share to TwitterShare to FacebookShare to Pinterest
Labels: Kenia Cris, Kenia's Challenge

I just love the forthright style in which she expresses herself. Perhaps that is due in part to the translation but it strikes me as sparse, direct and true. That you for gifting us with another wonderful poet and her world.

Huh! What is taboo today? I'm putting my thinking cap on...

What a sublime poet. Thanks for the introduction to a woman of such gift and character. Her poetry indeed seems like something attached to an infinite ongoing mystery.

First? or Not? here is a new kind of poem for me in response to your fine challenge, Kenia. I am moved by Hilda Hilst's poetry, by this glorious day, by the glass of tap water in my hand, and by mingling in the garden with other toads.

"I come from your roots, breaths of you,
And I love you tiredly now, blood, wine
Unreal cups corroded by time."

"I love you small like one who wants MORE"

"Brother of my moment"

"And may I
Shrink before so many weaknesses. Small and soft
Like spiders and ants."

I'm sure mine is not at all what you had in mind.

Undoubtedly, I wouldn't have written this if not for this prompt.

I'll come back in the morning to reply to the poems submitted. It's almost 4:30 am at my place.

Have a great day, everyone. :)

Yeah...um when you said "local problem," Kenia this is where my poem sprang (sprung?) from...very local...backyard in fact! Ha ha! Hope it meets the challenge, if not it was a good vent!

Thank you for introducing us to Hilda, too!!
:)'s

Hi Kenia - good luck in Sao Paulo - I traveled through there once on the way to Rio Preto - I just remember grey buildings! - I was super sick that day, and so so happy to get to the countryside.

I don't know if my poem fits the bill - it is not political, but is about disagreement, irregularity of a sort. Thanks much. k.

I'm still caught somewhere in the stars from my last poem, so my poem for this challenge continues some of those images. I loved reading this poet's work, Kenia. Thanks for the inspiration!

Hilda, what a dynamic, inspiring person! Of course they Mary Magdalened her during her life... men are often threatened by outspoken women, and they controlled the press, etc...

I am proud to have my 500th post be at your blog. Thanks so much for all the opportunities! Amy
http://sharplittlepencil.com/2012/07/13/twofer-serenity-leaders-and-bleeders/

I really think this was an awesome idea! ...but I am running behind and am packing for SUMMER VACATION! So, I will have to not participate in this prompt. I will try and swing 'round, though, and read all the ones who did early next week when I'm chillaxin' at the beach :)

loved hilst.
mine is late, and doesn't really follow the rules.