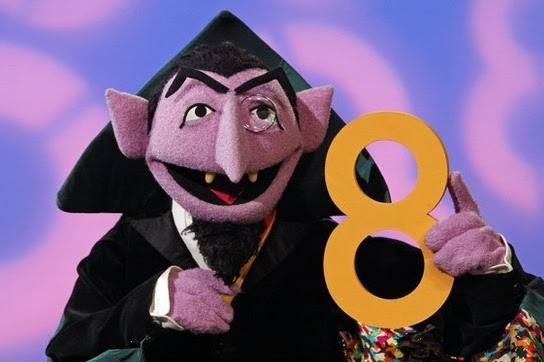 Today, we are writing poems incorporating the number eight.  How? Why, anyway you like!  Use the word, the numeral, write eight lines, go concrete; it's up to you.  Just do it in eight words or less.  I'm kidding!  Let's make it . . . eighty.

Imagined By Maude Lynn at 5:30 AM
Email ThisBlogThis!Share to TwitterShare to FacebookShare to Pinterest

I love the Count!

Phew! You had me sweating there for a minute, MZ. 8 words...

well, it's something, anyways. what? I don't know

Thanks, MZ--you gave me an excuse to write another fibonacci. ;_)

Smiles!! Love the Count, too!! Thank you MZ for the challenge! :)

Marian - yes, there's a prick where hope was.

Grapeling, that is freaking priceless!

ball-less. (The NSA censored my other replies.)

Mama Zen, your chosen illustration sent me in this direction--8, in eighty! Yay to Marian and the number 8.

Well, this was fun. I froze for a second at "Just do it in eight words or less" but breathed again at eighty.
K

Love this. My muse of late has had me typing through mud it seems...she makes me work for everything. :)

My mind was a total blank (which I am very much use to) but finally something clicked.
I am enjoying your alls!

I was very brief tonight...

because today's other famous number has been covered

Fireblossom and Margarets Eight Words very good... I dont feel a kiss will give the sealing in me a soul or tell me I am beautiful...Live long enough and the metaphors make new memories and new metaphors... slow connection so this is too much like homework to respond all the time to all of you... eight words, who says we don't like haiku? Well, I liked the song but the video was so contrived. So forgive my contribution today, it is an endless lazy eight.

Loved this! Thank you!
(Though I was all set to write that 8-word poem for a minute there.) ;)

Hey, MZ. Hope all is well. Words count always a good practice for me. k. (This is manicddaily - I think my iPad will insist on posting from an old blogger id.)