A Birthday in March - Frost

Robert Frost was born on March 26, 1874, in San Francisco. He became interested in reading and writing poetry during his high school years in Lawrence, enrolled at Dartmouth College in Vermont in 1892, and later at Harvard University in Boston, though he never earned a formal college degree. His first published poem, "My Butterfly," appeared on November 8, 1894, in the New York newspaper The Independent.


Robert Frost and his wife, Elinor, moved to England in 1912 and it was abroad that Frost met and was influenced by such contemporary British poets as Edward Thomas, Rupert Brooke, and Robert Graves. While in England, Frost also established a friendship with the poet Ezra Pound, who helped to promote and publish his work.

Though his work is principally associated with the life and landscape of New England—and though he was a poet of traditional verse forms and metrics who remained steadfastly aloof from the poetic movements and fashions of his time—Frost is anything but merely a regional poet. The author of searching and often dark meditations on universal themes, he is a quintessentially modern poet in his adherence to language as it is actually spoken, in the psychological complexity of his portraits, and in the degree to which his work is infused with layers of ambiguity and irony. - Read the full article at Poets.org, where you will also find a list with links to many of his well-known poems. 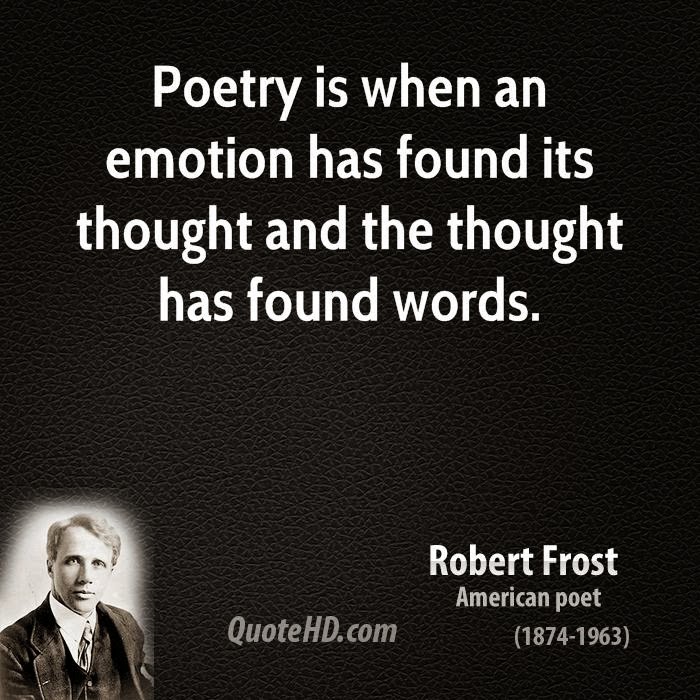 I am certain that we all have favourite lines written by Robert Frost, that have been as closely held as old companions, or poems which we memorized in our youths and never forgot. He had a way of summing up simple truths in single sentences, while demonstrating an intense understanding of the human condition. For this challenge, I encourage you all to revisit his poetry, or peruse a variety of his quoted words on Goodreads.com and to respond in what ever way you feel inspired to do.


Imagined By Kerry O'Connor at 12:00 PM
Email ThisBlogThis!Share to TwitterShare to FacebookShare to Pinterest
Labels: A Birthday, Mini-Challenge, Robert Frost

my favorite poet...be hard to pick out just one of his poems...he says great deal in a few words...

The road not taken, my favorite favorite poem. Thank you so much for remembering Frost and I hope I did some justice to his masterpiece. (Sfurti)

This monthly birthday feature has come full circle since it began in April 2013. I will be throwing something new into the mix on the next first Sunday of the month.

I also want to let you all know that I will be away for the day tomorrow but will catch up with all the responses when I get back.

Have a wonderful Sunday.

A great poet, not easy to respond to. I tried though.

Hey Kerry - this is kind of amazing. I was just looking at the Frost Farm Annual Poetry Competition for Metrical Poetry. I Don't enter many contests but this one is reasonable entree - $5 and a pretty good prize structure. The deadline is April 01. and the website is: http://robertfrostfarm.org/poetry-contest.html. This must be a sign from the Competition Gods. :)

The poem that stuck with me first was the wonderful "Stopping By Woods On A Snowy Evening" ... Somehow it struck a strong chord with me... (and since I never read English poetry as young it was quite recently)... wonder if I can ever do anything like that.

Perhaps the familiar words and wisdom of Robert Frost are just what I need today. Thanks, Kerry.
K

Ah! Happy to spend time with Mr. Frost. I did not achieve what I set out to do: to write a narrative poem in his way with folks and dialogue and real settings. So I did a bit of my usual cataloging and moralizing--along with a lot of thinking that will be useful on another day.

i love his poetry, thanks for this.

Thanks for the prompt Kerry...

Hey Kerry--I love Frost-and have rewritten an old song based on him. I am slowly getting back into poetry after a (still ongoing) break. Hope all is well with you. k.

Thank you, I will be back to read!! Happy weekend poetical peeps!!

I tend to favor Sandburg over Frost of poets of that period, but that is probably a regional prejudice. ;_) I have nonetheless found something bubbling in the cauldron--it is snowy here--will be by later to read, and a happy Sunday to all.

I am so happy to see how many people have responded with fond memories of Frost's work.
To me, he is the epitome of the gentleman poet, of a breed we see almost never in these times.

I apologize for my tardy commentary, but I've spent 6 hours on the road travelling to and from my daughters' university town. I'm nursing a small headache and an aching back so forgive me if I get to your poem a bit late. I have not had the opportunity to write my own response either.

I love how you describe him as a 'gentleman poet'-thank you Kerry!
Take care Kerry-I do hope you feel better. Six hours will be my future in the autumn. I'm off to gather insight~

just love this, Kerry. i've been absolutely consumed with very unpoetic responsibilities and apologize for not being here in the Garden much. but, Robert Frost has a very special place in my heart. perhaps i'll think of something, but if not, thank you anyway as just reading this makes me happy. xo

Wonderful prompt, Kerry. I thought I may not have time to participate, but as I am a Frost fan, I could not resist!

You inspired me and instead of teaching today I am home reading--Thank you!

I'm sorry, Kerry, that I missed this one, I liked him. I will check some on him now, thank you for the nice start.
..