Sir Charles Spencer "Charlie" Chaplin, KBE (16 April 1889 – 25 December 1977) was an English comic actor, filmmaker, and composer who rose to fame in the silent era. Chaplin became a worldwide icon through his screen persona "the Tramp" and is considered one of the most important figures in the history of the film industry. His career spanned more than 75 years, from childhood in the Victorian era until a year before his death at age 88, and encompassed both adulation and controversy. Source.

A silent film is a film with no synchronized recorded sound, especially with no spoken dialogue. In silent films for entertainment the dialogue is transmitted through muted gestures, mime and title cards. 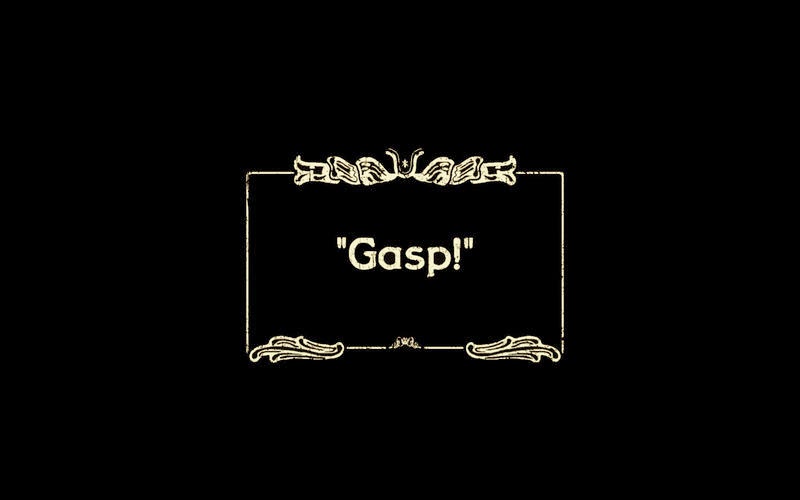 Many early silent films were either dramas, epics, romances, or comedies (often slapstick). Calling them silent films is something of a misnomer - movie theatres and other dream palaces provided pianists, wurlitzers, and other sound machines, and some films were produced with complete musical scores. Most early silents were accompanied with a full-fledged orchestra, organist or pianist to provide musical background and to underscore the narrative on the screen. Some even had live actors or narrators. (Source)

As always with my challenges, I have no fixed idea how one could turn the idea of Silent Movies into poetry. I might suggest a perusal of Title Cards, which certainly offer a wealth of inspiration. There are also several movie clips available on Youtube, among them a "love scene" and the little tramp's iconic battle with a fold-up bed. Alternatively, you could consider the elements of the genre and incorporate them into a narrative of your own - or mix it all up. I have every confidence that we will have some amazing poems to read before the day is out.

Oh dear, I'm afraid I never did like the peer or the tramp, or vice versa.
I'm glad I'm not committed to a poem a day. But I am looking forward to finding out what others think.
Luv, K

This will take some thought... But I'm looking forward to it, and will get back with something later. A great prompt, as far as I'm concerned!

I'm a huge fan of silent film. Love this!

That was a lovely film, good old Charlie.

PS--That's a hilarious clip of Charlie Chaplin with the lion. Charlie wasn't an instant success in movies. He was about to be let go, but a favorite of mine, Mabel Normand, argued that he should be given another chance. He was, and the rest is history.

Great challenge, Kerry, and it's great to see you furthering on your avant garde mythologies at Skylover. Silent films were everything and then with a simple technological innovation they were--like that!--lost. We live in similar times, I think.

What a golden challenge! I grew up surrounded by film. My parents met in a theater-he was a Projectionist and she the concession stand girl. Popcorn is my comfort food~

I think I went off prompt but I wrote something.

Love this Prompt! Love the skill of physical acting ... And the melodrama ... And the music ... even if it picks up a little of Dvorak and others. Thanks, Kerry.

I so love this challenge, Kerry. I have nothing for it yet, of course, but you never know. I'm old enough that I remember silent movies as a sort of 'shtick' in a lot of early television and thirties and forties comedy that ended up on television, so it has a connotative meaning of 'melodrama' that is only dispelled into the compelling art it is when I actually see silent movie acting now. Thanks for such a creative and interesting topic.

Loved the challenge, but it kicked my butt!

I have something posting at midnight (for my 17th april poem)for this, and I will link it as soon as I can, and be around to read in the morning. A really fertile challenge, Kerry--thanks.

I enjoyed the heck outta that, Kerry! Thank you!

Thank you for this unique challenge. I really enjoyed reading everyones and I also have a few movies to watch! :)

Kerry-- I very much liked this prompt but not sure I did the best job on it. But thanks. k.

PS -- Charlie Chaplin has been a long time favorite. Buster Keatontoo. I'm afraid I haven't been so involved with the women --know some names but don't have the same connection to them. Thanks. k.