Prompt for Today: In the Footsteps of the Suffragettes 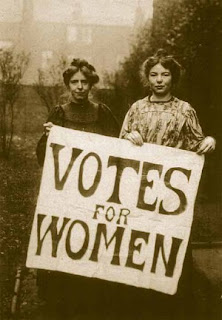 Greetings, toadly companions! For the 8th day of April, let us contemplate womanhood. Recently I watched the film Suffragettes. Living through, and coming alive, during the Women's Liberation Movement in the 1970's, of course I knew that women had fought hard for our right to vote. This film showed me that those early 19th century women suffered far beyond what I had imagined: they were beaten, jailed, went on hunger strikes, lost their jobs, their homes, their husbands, their children. Some even died so we could vote.

Emmaline Pankhurst, played in the film by Helena Bonham Carter, was a driving force of the movement in Great Britain. (Her eldest daughter, Christabel, is in the photo above.) In 1999, Time Magazine named Emmeline one of the 100 most important people of the 20th century, stating "she shook society into a new pattern, from which there could be no going back." 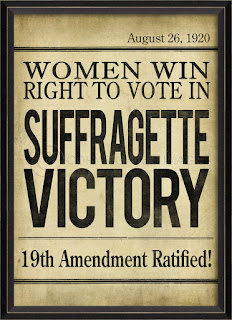 Our challenge:  write about women's freedom in any way that is relevant to you.

Write about a woman, past or present,  who embodies the concept of personal freedom to you.

Write about a strong woman ancestor in your family, who exemplifies the long struggle for women's equality, perhaps because she never achieved it in her own life, due to the times she lived in.

This gives us lots of scope, since we all come from strong mothers, grandmothers and great-grandmothers. I look forward to reading about your wonderful women!

Imagined By Sherry Blue Sky at 12:00 AM
Email ThisBlogThis!Share to TwitterShare to FacebookShare to Pinterest
Labels: Poems in April

Such a beautiful prompt this is :D sharing my poem "Sevenling (madre)" dedicated to all the strong women and mothers out there.

Thank you Sherry for the lovely opportunity..!!

A male perspective on this Sherry... are we ever perfect?

hey Sherry, thanks for the prompt ~

Great prompt! Really looking forward to reading responses to this one :)

Good morning, kids. I am late to my own party! I am a few hours behind the rest of you, it seems. So nice to see you all here. I am looking forward to reading about your strong women, and am sharing some from my family this morning. Thank you all for taking part!

Sherry, this one was easy to tap into because my mother was a fierce one. Her fight was usually against my father, but she also fought for her own financial independence and freedoms which she eventually attained by becoming owner and operator of her own business. Then, she really bossed my dad around! ha

Thank you for this prompt, it brings back memories of many of the strong women I've known, within my own family and without. I have resorted to rhyme again, my thoughts went that way :-)

Your poems are all blowing me away. I am smiling, cheering, stoked at all of the women warriors there are out there, who stand up for the right to be who they are. Thank you all for the inspiring reads this morning. I am so inspired, I am about ready to take to the streets and whip up a parade, LOL.

Another fourfer: A poem about my mother (this prompt) and a flower (NaPoWriMo blog), and it's a bit of a doodle (Poetic Asides), and it has something to do with attention (my own month-long prompt). It was fun to fit all that in.

Thank you Sherry for the prompt!

I was browsing my dashboard and noticed this prompt, then noticed you imagined it. I love the topic so, I just had to write something. Good prompt Sherry.

Please pardon me, if my poem comes across as dry, as I had to figure out how to get this history, into a form that keep you info and eager, to read more.

Your poems are why I love and admire women so much. They have hard lives, by and large, but grow strong as they weather their lives.....we soften as we grow, like elderly trees, and become nurse logs to those who follow after. Thanks to each one of you who was inspired to write by the women in your lives. I found a gem in every poem.

Hello! This is my first time participating on your link up, but I saw the prompt and I just couldn't resist. I submitted a poem that I wrote earlier this week that I thought would fit in nicely. I hope you don't mind that I participated and I look forward to reading and commenting on others!

Yes that was a wonderful movie (though it was Meryl Streep who played Pankhurst). I still have plenty of passion for this subject!

Ashley, welcome. Your poem is WONDERFUL. So happy you joined us.

Late entry! Wonderful prompt, Sherry. Mine veered off unexpectedly... I've written so much about my grandmother and others, this other woman came up for me tonight. Thank you :)

A little late, but I wrote a poem I'm pretty proud of about not just strong women, but stronger older women still fighting for our rights. It's called, "Sliver Haired Crusader."

I'm sorry I haven't been reading lately I was sick and thought I was over it but I wasn't. I finally started riding my bike again but I'm still not up to par. I hope this is the end of it! I need to get back to writing and reading! Hugs!