Physics with Björn: Particle-wave dualism and the photoelectric effect

I continue my excavations into physics and hope that you can conclude the NaPoWriMo successfully. Coming last it’s a pleasure to bring you something challenging.

At the end of the nineteenth century physicists believed that more or less everything was solved. Newton’s mechanics governed the law of particles and bodies, while optics could be explained through Maxwell’s theories of electromagnetism. The atomic theories have started to be developed, and it seemed that we could explain everything under the sun (and even beyond). By the way, a scientific theory requires evidence, it requires consistency and coherent observations. Newton’s laws and Maxwell’s equations are still valid enough to still be used in engineering.

But sometimes we find things that required new and updated theories. You have probably all heard about quantum physics and wondered about it. So let us go back to the roots. In 1905 Albert Einstein published a paper that later gave him the Nobel Prize in 1921. With his theoretical model he could explain the so called photoelectric effect. 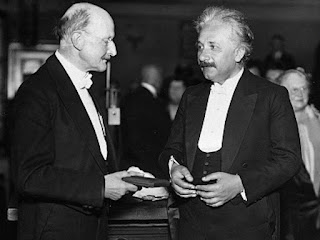 The effect showed up as electrons emitted when an electrode was illuminated. The revolutionary model that Einstein proposed was that he attributed a particle properties to light. which has up to that point been described only as an electromagnetic wave obeying the laws of optics. But with the attribution of particle properties to light Einstein could explain and set up equations for the photoelectric effect. If you find this to be mumbo-jumbo, just skip it. The essence of this is the shapeshifting properties of matter. The particle wave dualism.

The concept was later broadened so that also particles can be waves. Particles can be refracted just like they are waves, and you can attribute both wavelength and frequency to them, just like light can have momentum.

So it goes both ways. A particle is a wave and a wave is a particle. In some cases we see particles governed by the laws of optics, and the next moment they are like little spheres.

Today I thought you could use this shape shifting nature of nature on microscopic level for a poem. Or you can chose to write about the consequences in terms of electronics and optics of the world today. Or challenge my belief that science can predict and used to decide the world.


Imagined By brudberg at 12:00 AM
Email ThisBlogThis!Share to TwitterShare to FacebookShare to Pinterest
Labels: Physics with Björn, Poems in April

I look forward to what you might do on this (-:

thanks, Bjorn, for a thoughtful prompt.

congrats to all who journeyed this month. ~

AAARRRGH!!! Now THAT'S a challenge! It might take me a while to write something.

Hey Bjorn. I went for fun on this one. Hope the eye is healing bud.

Time for the epitaph, I feel.

And I second, Michael.. A hearty round of applause for all who journeyed in part or the whole way through April. It has been a blast.

I love how you treated the challenging subject so far... good luck concluding.

Lol i have no freaking idea what i have written Bjorn ☺ was up all night... congratulations to us all for completing NaPoWriMo 💖 we did it!!

Yes, yay us, the April daily poets! (And this time, to finish up, I have completely lost the plot.)

Oh my Bjorn, my high school education is struggling with this one. Not sure I captured what you wanted, but I did find a poem in me. I admire your ability to use science for inspiration. Congratulations to all who dove into the cruelest month with poetry. I managed thirty days of poems. I needed it. I was in the dust of that brick wall a writer sometimes bangs her/his head on.

hats off to April's poem a day writers - I find it hard enough to keep up with regular themes. This topic was way off my wave length so stuck to particles of physics as allegory. p.s. I can see where this inspiration came from - hope your vision improves Bjorn

Yay, all! We did it! You rock!
Bjorn, I have no idea what you're talking about. ;) But I like to play with words.

Was some trip...so happy to have met and hung with you Toads...my first napowrimo and 30/30 plus a few snuck in on top...loved it...fired me up. Congrats all.

Loved this challenge, Bjorn. I wrote a couple of poems for it, but may only post one. Thanks. And thanks to all who've helped me get blogging again. k.

Bjorn, i am so bad with physics...and so off-prompt...unless you count bouncing things and music waves as okay? Congrats everyone for undertaking such a big challenge. Whew

Physics always lost me in high school, so i tried to write about something that can express itself in more than one way. I hope that is close enough...it is as close i could get.