Welcome to the Weekend Mini Challenge with Kim from Writing in North Norfolk. 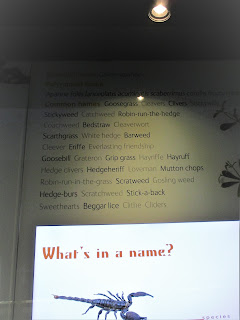 A couple of Saturdays ago I visited the Natural History Museum in London. Saturdays are always very busy, especially in the dinosaur section, so we wandered into the Darwin Centre, where we found the Cocoon, a huge space dedicated to the collecting and naming of new species. Having studied linguistics at university and being a retired English teacher, as well as a writer, I was drawn to this section (apologies for the photograph).

Some of the names given to flora and fauna are little poems on their own, such as Everlasting friendship and Robin-run-the-hedge, as found on this display. I have found some fantastic names given to insects, such as Blue moon butterfly, Dewdrop spider, Tumbling flower and Whirligig beetles. A velvet spider has been named after Lou Reed and scientists have called a prehistoric crocodile Lemmysuchus obtusidens, after Motörhead frontman Lemmy.

I was intrigued by the ways scientists choose names for their discoveries and thought it would make a nice prompt. So today I would like you to write a new poem about how you named something or someone: a child, a pet, a plant - whatever it is you have given a name, tell us about how it came about.

Join in by clicking on Mister Linky and filling in your name and url – not forgetting to tick the small ‘data’ box. And please remember to read and comment on other toads’ poems.

Hi Kim. I took a peep at this earlier today and worked on something for you. Not quite to the letter of the prompt but a poem I really enjoyed writing. Thank you.

Hi Kerry! I'm not long back and the prompt has just gone on. I haven't read your poem yet but I'm looking forward to it and delighted you enjoyed writing it! Mine is short and sweet.

What a fun prompt. Thank you Kim.

I was reading about swans (Cygnus) in Celtic mythology and was enamored by the idea of incorporating them into a poem. I hope it fits the prompt!

I went all abstract and struggle with this... maybe more the process of naming what cannot be named.

Ditto Margaret. Thank you, I have a 55 word Flash Poem tonight.
I hope you all smile, possibly learn a bit.
..

Well it's not all that mini but it's kinda spare – and a well-timed prompt for something I needed to write.

Hello And I hope you are all having a wonderful day. Thanks for the prompt Kim. Joining in this afternoon!