The Women from the South, Kerry and Kenia, have put their heads together and decided to mix things up a little by sharing the Wednesday Challenge slot and seasoning the Real Toads with South African and South American flavour every fortnight. Today, Kenia brings us a wonderful musical challenge. 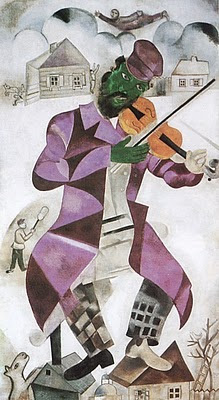 The Green Violinist, 1923~24 Chagall
Here's a list to think of: a lullaby, the song playing when you first kissed a boy/girl, a break-up song, a movie soundtrack, a road tripping song, a song you hum now and then, a song from your teenage days, a song to sing in the shower, a mixed tape, a song to sing in a karaoke bar. Music has always been around.
If any of us took some time to write a memoir, we'd certainly discover a song playing in the background to each and every bittersweet memory of ours. I used to listen to Duran Duran when I was 11; at 15 I was a fan of Simon and Garfunkel; at 16 I fell in love with Haendel; The Smashing Pumpkins stole my heart a few years later; Cat Stevens bewitched me when I was 22; I had an affair with Bob Dylan some years later and it took me some time to actually understand my real love was music which would take my feet off the ground and make me want to fly, like the little man in the background in Chagall's painting above, no matter who was playing it.
There is an African tale told by Tolba Phanem which speaks of songs being born with children and following them all through their lives, bringing them the memory of their own identities and purpose in life whenever they feel confused or lost, and that's what today's challenge is about.
CHALLENGE
Go to This Day In Music and discover what was number 1 on the charts in the United States, England or Australia the day you were born, or any other special day in your life, if you prefer. Listen to the song(s) while going through your personal history, revisit pictures and memories and write a poem which will be your own chant.
Link your poem (we'd love to hear about the song too!), leave a comment and provide a link in your blog to Real Toads. Have fun!
(P.S.: If your birth year is not listed, I'll personally search Google for your song.)
Imagined By Kenia Santos at 1:35 AM
Email ThisBlogThis!Share to TwitterShare to FacebookShare to Pinterest
Labels: Kenia's Challenge

YEAH! My song is Respect by Aretha Franklin...

How soul destroying. I am so old, that site you linked us to doesn't go back as far as the day of my birth! Now I really do feel like Methuselah.♥

Jinksy, Let me know the date you were born and I'll search google myself for the number one on the charts on your birth date. <3

I can't escape the corny love-songs... what does that say about my chances.. even from birth I was jinxed!

This is fascinating and so in tune with what I received in the mail yesterday. I ordered a book for my daughter called, "The Song Reader"
~Lisa Tucker.
The byline is "Can the lyrics to a song reveal the secrets of the heart?"

I will have to give this one a try~
Still trying to find another one I wrote for the meditation. Think I will start over ...

I LOVE this challenge! I will be back after work. Great one, kids!!!!!

Record charts in the UK began life in 1952 and you can see the very first here, in case you want to.

The song on the American charts on your birth date is:

Hope you still want to participate in the challenge using this one, or one of those you mentioned to remember. Thanks for your patience and attention.
Love,

Love the Chagal picture .. and Dylan was on the first day of recording sessions for his Bringing It All Back Home album were held at Studio A, Columbia Recording Studios in New York City. Dylan recorded ‘Subterranean Homesick Blues’, and ‘It's All Over Now, Baby Blue.

So great songs just not the year - but the date will do! Cheers Hilary

fun!
"When A Man Loves A Woman" by Percy Sledge.

i protest my song. 'baby come back' leaves no room for inspiration.

Wonderful challenge, I chose to do a poem about how I feel now~ I think I'd like another go, something that defines special! May try again...