By the time this post goes up I’ll be out in the sticks with my parents, with no Internet, cellphone or cable, jumping in day one of the Mighty Bell challenge I signed up for at least two months ago: GO TO THE WORLD. I’m there already and managing to survive it, I’ve packed my favorite books to go! 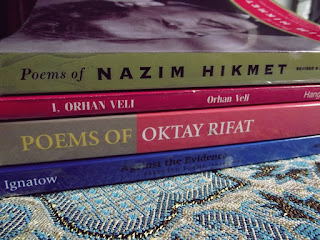 And I wanted to introduce you to this remarkable man who cut Turkish literature open and changed Turkish poetry forever: Nâzım Hikmet. (I was born on his date of death, fifteen years after he passed. I have a thing with Turkish poetry, you know.) 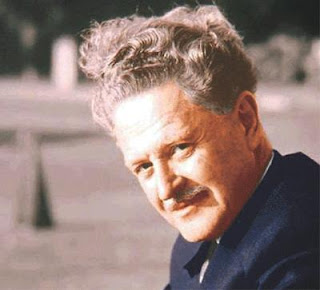 I was born in 1902
I never once went back to my birthplace
I don't like to turn back
at three I served as a pasha's grandson in Aleppo
at nineteen as a student at Moscow Communist University
at forty-nine I was back in Moscow as the Tcheka Party's guest
and I've been a poet since I was fourteen
some people know all about plants some about fish
I know separation
some people know the names of the stars by heart
I recite absences
I've slept in prisons and in grand hotels
I've known hunger even a hunger strike and there's almost no food
I haven't tasted
at thirty they wanted to hang me
at forty-eight to give me the Peace Prize
which they did. (unabridged poem: 'Autobiography') 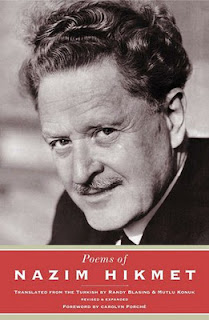 
Nâzım Hikmet wrote his first poem at the age of 11 in 1913. In his early years, he chose to write in the syllabic meter. But he later started writing in free verse, because he found the syllabic verse was too limited for him to express his message. His early work was heavily influenced by the Soviet poets usage of futurism, or "word autonomy".

Living is no laughing matter:
you must live with great seriousness
like a squirrel, for example--
I mean without looking for something beyond and above living,
I mean living must be your whole occupation. (unabridged poem: 'On living')


He was a Communist and his concern with social issues is a common theme in his poetry. He spent 13 years in jail and other 13 years in exile, dying in Moscow in 1963 after having been stripped of his Turkish citizenship. In prison as well as in exile he is inclined toward phenomenological celebration, he is in love with life and its complexity, beauty and horror. 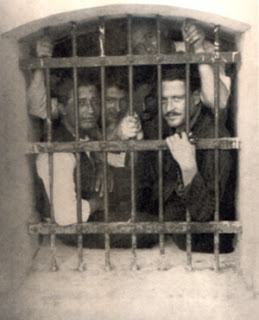 In many of his poems he also explored themes of personal loss and separation in a prosopopeia with a longed-for but absent wife (he married three times. There are mentions to the wives all through his poems.) 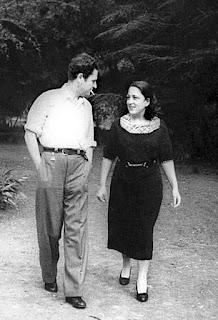 I
Want to die before you.
Do you think the one who follows
Finds the one who went first?
I don’t think so.
It would be best to have me burned
And put in a jar
Over your fireplace.
Make the jar
Clear glass,
So you can watch me inside…

CHALLENGE:  Write a futuristic poem. Simple, isn't it? Link your poem, leave a comment and provide a link in your blog to Real Toads. I promise to visit you guys when I'm back on Sunday.

An interesting man and challenge. I will link up later ~

I'm not sure I understand in what way futuristic poetry differs from much of what I write already.

*goes off to muddle it out*

Well, it wouldn't be a challenge if it weren't ... challenging. I went back over my posted opus and found a poem about the use of poems after their singer's gone.

This is great... thanks, Kenia!

Gosh, will my Wednesday-tired brain wrap around this challenge? I feel it flailing about in panic...

I have to say, I've read the wiki on futurism twice and I'm not getting much of a picture on how it differs from surrealism, modernism, and other forms of free verse that shape how we write today, but I'll see if I can get figure something out--its a very interesting biography of the poet in question.

sorry--ignore the extra *get* above please--I am still waking up.

Hi, Miss Haggenbich here. I have no alternative but to mark Hedgewitch off for that extra "get"! :-P

This was quite the challenge. Hope I can rise to meet your expectations.

yes, i am feeling thick about this, as well. is everything i write in the futurist tradition? because i am nothing if not "hyper-concise." hmmm.

@Miss Haggenbottom: I have no doubt you'll be marking my poem off for complete lack of 'hyper-conciveness' as well. ;_)

I have no idea if this is anywhere near the vision of futurism, or even if it is should be termed a poem. My process was decidedly unpoetic.

A VERY interesting poet. I like his style. Am interested in the prompt, will see what I can do. Am a little uncertain of how, at this moment:)

toads? i don't know if this is futuristic and i am certain it is not poetic. but i would like friends to read it because i feel very raw about having put it out there. please tread cautiously in clicking over to read my poem today--trigger warning--it addresses rape of children and current events. thank you, friends. peace.

This is a good summary of the movement: "Futurist poetry may be characterised by its unexpected combinations of images and its hyper-conciseness" ... like the sudden appearance of a squirrel or a pencil in his poetry.

How interesting..and what a challenge. I posted my attempt. Think I probably failed the form..but I had fun! LOL

I gave it a whirl.

I rewrote this SO many times and tried to get it in by Wednesday. Now I'm off to read all the others. This is really a fun topic!