So... Grace contacted me this week with a personal challenge that pretty much knocked me out. Knowing Grace, I had a feeling some kind of form poetry (at which I hold the world's record in sucking) would be involved. As usual, she blew all expectations out of the water. I give you, the challenge:


Please write a series of haiku in the teikei fixed form. NO so-called "Haiku in English", please. Minimum of three and maximum of six pieces (and remember, four is the unluckiest number in Japanese), adhering to all traditional rules in their strictest sense, including the use of seasonal images and cutting words. You may use the English language convention of 5-7-5 syllables, OR write your haiku in 12 syllables (a closer match to the traditional on). The subject matter of your haiku is entirely up to you, and may be as untraditional as you please.


What ensued were days of syllable counting, weeding through ideas and excess words, a fantastic conversation with Grace, 68 attempted poems, and a new-found love of the discipline of haiku.


Although the 5-7-5 convention is traditional, I learned in my research (yes, research :) )  that Japanese haiku are often written in a single line, and the number of on (loosely comparable to English syllables) fluctuates, even in the work of haiku masters.

I'm not quite ready to call these attempts of mine haiku yet. True haiku always feel light, to me. Like an apple blossom, weightless on the surface of a still pond. These feel more like a dense chunk of brick, slamming through the surface, wreaking havoc on all those haiku frogs jumping into old ponds (--water's sound!). Since they're not quite haiku, then, I'll content myself with calling them Low-ku. ... low-ku with a will to climb.

Three of the poems below are 17 syllables, two of those use a 5-7-5 structure, one a 6-5-6; and the remaining poem is a 12 syllable attempt, with two lines of 6 syllables each. (that's right... four wildly unlucky low-ku for your consideration.)


The accompanying pictures/videos are not meant to be descriptive of the words, but in most cases acted as inspiration. The first photo, you will recognize, is the work of Isadora Gruye, and was featured here recently.


Without any further yammering ado, I give you... low-ku 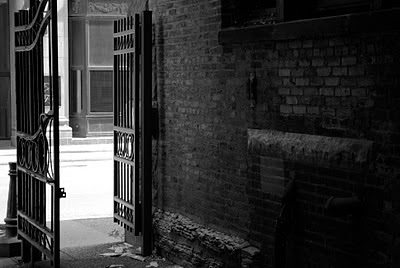 through scarlet darkness,
each to his own hell – such is
the nature of love.


verve, driftwood & moon,
lightning, jello, ash -- such things
as bones are made of
:::
III.
{Son House rocking 'John the Revelator' ... it was actually the White Stripes I was listening to at the time, but youtube is sorely lacking in an acceptable version, and anyway,  it's always time for some good Delta Blues.}
John the Revelator –
Music of strange worlds
In the days of no days.
:::
IV.

aged faces, story-smocked;
how vast the span of wings

Thanks so much, Grace, for the challenge!
Pondering my victim,
Shawnacy Kiker
Imagined By shawnacy at 5:03 AM
Email ThisBlogThis!Share to TwitterShare to FacebookShare to Pinterest
Labels: personal challenge

Holy marmosets. I'd have taken one look at all those rules and committed hari kari instead. You are brave!

And what a worthy job you've done with your cleverly titled "low-ku". I like the first two, especially.

It's always a good time for some Delta blues, though now I just have to know what the White Stripes song was. My personal favorite is "Ball & Biscuit"!

Wow, this personal challenge thing has been all over the map. I'm glad I have already walked through the fire! Great job, Shawnacy.

For one who prefers lengthy pieces, I really appreciate your commitment to the art of poetry in creating four exceptionally beautiful haiku (I do not accept the word 'low' in this context because each one soars.)

The first two are perfect companion pieces, and display your talent in always finding the right word combos: scarlet darkness linked to love; jello and ash linked to bones. In III, your have taken the "Revelator" and provided revelation: the strange music of the end of days. But the last is brilliant: the face tells a story, but the hands are the instrument of actions... a span of wings, an endless possibility.
Stunning work which I am so gratified to see on the Home Page of Real Toads.

OH, MY GOODNESS --- THESE ARE JUST WONDERFUL! (Notice that I am shouting across cyberspace here!) You've squeezed the essence out of things here and have produced an amazing series of word pictures. To say they're impressive would be a great understatement.

Your haiku are beautiful. I hope mine can measure up.

I've jumped in with both feet, but am still all at sea, I think! You can find me HERE if you want to see the splash!

My serious lack of any sense of numbers leaves me incapable of writing hi- or lo- ku .. and those instructions alone would have made me cry .. uncle! ... but I am deeply admiring your response to the challenge.

N.B. I think I must have still been half asleep when I read the instructions, for it failed to register that a personal challenge in not necessarily one we need to join in!
You did a great job with the challenge, Shawnacy, and Grace deserves a pat on the back for prodding you into action! LOl ♥

honestly i cannot even stop laughing at the perfect wonderfulness of grace assigning strict haiku to my favorite queen of verbosity, shawnacy. i'll come back and read them again once i've managed to stop giggling! hah!!

thanks, everyone. it really was a challenge for me. i kept having to remind myself 'say less', 'say less'... this quote by basho says it much better: "The haiku that reveals seventy to eighty percent of its subject is good. Those that reveal fifty to sixty percent, we never tire of."
it was such a great stretch (ironically) for me, and whether i publish them or not, i'll definitely keep up the practice of haikuing. :)
i have a friend who, in the spirit of the 10,000 hours principle (it takes at least 10,000 hrs of practice to master something), has set out to write 10,000 haiku.
pretty amazing. you can check his out here: http://tenthousandhaiku.tumblr.com/

also.. i still need to know whether i passed muster with grace... despite my eschewing of strict syllabification in one of the poems. ... grace?

oh, and @fireblossom, the white stripes do a cover of 'john the revelator' .. it's pretty grarly. :)

Wow. Such incredibly beautiful writing, and such a difficult challenge. Absolutely spectacular.

Wow...what beautiful haiku and an exquisite response to the challenge.

I think that you did an amazing job with this. John the Revelator is my favorite. That is just awesome!

Wow, profound and beautiful!
You did a brilliant job with this challenge! I am in awe of your talents n' skill :D

haiku has such a way of expression that runs past a complete sentence... my first visit and now i am not so sure how i came...

Oh Good GRIEF!!! I thought this was a challenge for everyone and I went and suffered through a trio of my own.

I like that yours are different styles. The first one grasped me with it's twist. Nice work!

I enjoyed your senryu set (as haikuu refers to nature) specially the first one. The challenge of this form is always to portray more with less words.

You have risen up to the challenge beautifully ~

I am just now catching up, and Shawnacy, I am so proud of you. These are great. My favorite one is the last. Two lines of sheer power and vitality.