From a small cult following at Bob’s Market and Fairgrounds to chart topping success with “Semi-Sweet (Special Dark Mix),” Coal Black, singer / songwriter of Poison Apple is living the rock-n-roll dream.  Today, she sits down with me (Mama Zen) to give us a glimpse into her life and art.

Me:  I don’t want to come off like a total fangirl, but I am so excited to have you here.  I’ve been following your career since “Smoking Pile-Up of Love.”  But, for those who aren’t as familiar with your work, can you give a quick bio? 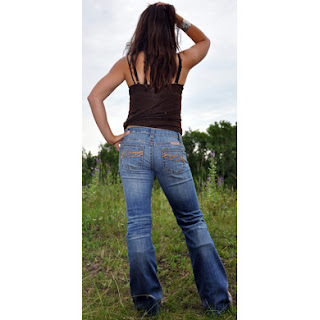 Coal: well darlin, i was born somewhere between here n there, on the shoulder of highway 61.  no really, mama dint make it to the hospital and the cab driver had to deliver me in the backseat. some cop helped after a while. i'm kinda surprised he dint arrest me right off the bat, but mama prolly charmed him.

i always loved my music. i had a buncha records somebody give me and i'd sit on the floor and listen to 'em til somebody get sick of hearin alice cooper twenty times and threaten to bust 'em. then i got a notion to play some myself, and got my first guitar when i was thirteen. this neighbor boy had an old one and we, um, had a negotiation and i brung it home and taught myself to play it some.

like ya say, when i got a little older, me and some boys form poison apple and we play the fairgrounds and such. we did  "smoking pile up" and "toxic sludge of love" and some rad-core kids start followin'. then this dude from uptown try to make me leave apple, he say he make me a star, but i think he just make me, and i say we all go or no one does. so he sign us and rip off half what we make, but semi-sweet broke big and here we are. yanno, ya coulda read all this in any fanzine, chica! (laffin).
Me:  Oh, I read the fanzines religiously.  And, they are all a bit sparse as to what you're up to now.  Can you fill us in? 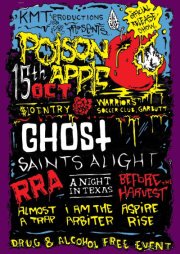 Coal:  well, semi-sweet did so well that we got signed as the opening act on the who's greased-slide-to-the-graveyard farewell tour. what a trip! the bass player croaked, and so they just stood him up on a metal stand. it was pretty weird. and the drummer was dead, too, so they sprung iron butterfly's old drummer out of the local rest home, but he kept playing solos in the middle of songs, like, every song is inna gadda da meatballs to him.

but what really helped us was when the free will brimstone bible church picketed the show in amarillo. that weirdo reverend phlops managed to get right up on stage as i was singin "shellfish allergy of love" and the dude tried to excorcise me! some biker tossed him back into the crowd, and the rad-cores got holt of him. anyway, it was all on entertainment tonight and stuff. our sales went nuts after that.

oh! and i got to tell you about the new track i just recorded with heavy flo. that chick is crazy! it's called "girlzilla and the chocolate skulls." you're gonna love it.
Me:  “Girlzilla and the Chocolate Skulls?”  That’s pure Coal Black, baby!  How do you come up with this stuff?  What’s your process?
Coal:  LOL @ what's my process. my process is to avoid anyone who asks questions like what my process is!
Me:  Come on, Coal, give me a break!  Tell me how you write a song.  Pretend you’re trying to impress me.

well, my process has changed since the early songs. if you want to know the process for those, you'll have to ask the southern comfort distillery! now i just find something--or it finds me--that makes me feel a true emotion. i clear the crap out of my mind and let it come through. it's really pretty simple...my songs write themselves, mostly. i just scribble down what it is that they wanted to say.
Me:  Is anything off limits?  Is there anywhere that you just won't go with your writing?
Coal:  yeah. i won't do ugly for ugly's sake, i won't take cheap shots at easy targets, and there's a limit to how gross i'm willing to be. and even though i love to make fun of religion, i won't make fun of jesus...i dun wanna hurt his feelings.
Me:  What about influences?  Anybody you think might surprise us?
Coal:  ha! yeah. there's the unsurprising ones...joan jett, joe cocker, annie lennox, chrissie hynde...and the country chicks like patsy cline and loretta. but then there's one that prolly nobody but me ever heard of. I found a promo copy of her lp in a used store absolutely ages ago, then had to leave it behind in a move. i used to get asked to plant myself elsewhere a lot! her name is pam garner and she sang standards. i love 'em! i'm bein pam when i do something like "easy".

Me:  Wow, I love that!  Coal, thank you for taking the time to talk to me.  Any words of wisdom you’d like to leave us with?
Coal:  lemme see...never trust anyone who can eat one potato chip. And, um...leave good tips for the waitress at the egg explodes. i happen to know her personally. that's it, miss kelli! love your ankh, by the way.

To keep up with all things Coal Black, visit her blog, House of Pain.  Coal Black is a Word Garden production.

Imagined By Maude Lynn at 5:30 AM
Email ThisBlogThis!Share to TwitterShare to FacebookShare to Pinterest
Labels: Interview

I wondered how anyone would get a Fireblossom to sit down to an interview without getting scorched.. and I see that MZ has come up with the most creative approach we have yet to see on RT. This is a complete eye-opener, and so enlightening for anyone who has ever wondered about the motivation of the elusive poet/songwriter known as coal black. I enjoyed it immensely. Thanks to both brilliant women for entertaining us with this interview - lots of hard work went into getting this right!

I'm a big fan of miss coal. Thanks for the interview, ladies. Really enjoyed it! :)

Hard to type when you're laughing this hard--the song titles and bands are too coal for words, and the whole personality of the interviewee just rips poetics a new one, I think. Even though Coal was much shyer and refined than I expected. (Ha!) Thanks to Kelli, and Fireblossom, and real toads for this delectable production.

I would have guessed Gretchen Wilson high on Billie Holiday with a few shots of Hatchetface. Aren't masks liberating? You get to go down all the roads the would have killed you if you had, sending back postcards from beyond the edge. Great interview with the sassiest unbuckled id the other side of tarnation's tracks! - Brendan

Well, coal, you had me at "opening for the who" and then I listened to your secret inspiration, Pam Garner. She had me with her 1940s-girl-singer skill, even before the trumpet solo, which clinched it. If you sound like her, ms coal black, you are frabjus.
Thanks, Kelli, for this wonderful interview. I enjoyed it a lot— and, coal, I can never eat one potato chip, or just one of anything delicious.
K

OMG. I am slayed, felled in the aisles. I enjoyed this to the MAX, as I knew I would. Love the one potato chip remark! Love Coal Black's perspective and distinctive twang. And Mama Zen - you are such a great interviewer. This was a delight, from Word One. I could sit hear listening to you two talk forever.

you know, i lost all my vinyl in a move, too. i can't even remember where the hell it all is. that's a shame, right there.

My little Coal, all grown up!

Love that interviewer, too!

What a fun interview...I love it ~

Love me some Coal Black! Great songs, great poetry, great interview, and works well as an eyeliner too!

Thanks to MZ for braving the interview and entering the House of Pain.

very nice! thanks for sharing...I learn something about her.

This was so much fun...Thanks for the interview

I love the personal feel of this... as if I'm sitting at the table with the two of you during the interview.

Nice to meet you!

great job drawing out coal, MZ, given that she's such a wallflower.

love every word out of your mouth, coal!
♥