Hello Toads! Today I am talking gangs, and in particular the 1950’s British gang, the Teddy Girls. They were working class young women who dressed in neo-Edwardian fashions. The Teddy Girls were the first British female youth subculture and have remained historically almost invisible. 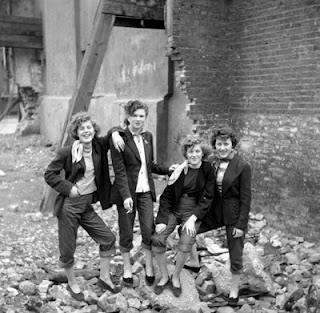 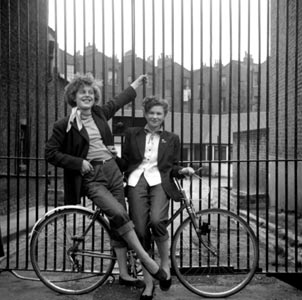 They styled themselves after the Teddy Boys of that era, but little has been written about them. The only known photographs were taken by Ken Russell and were gathered in a series he titled, The Last of the Teddy Girls. 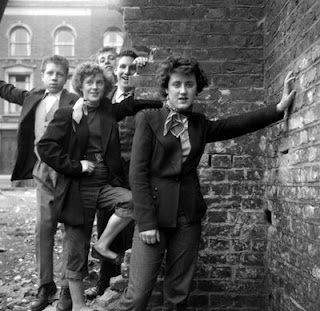 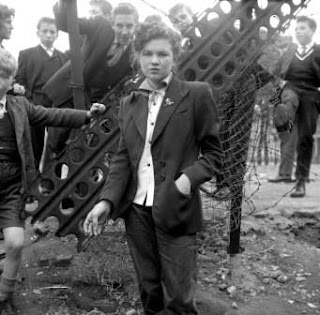 Today the challenge is simple. View the photographs and let them speak to you. What do you see in their faces, their eyes, their demeanor? Put yourself in their shoes, clothing, attitude, music, post war 1950’s Britain and come back to the garden with a new poem inspired by their images.
Imagined By Susie Clevenger at 12:00 PM
Email ThisBlogThis!Share to TwitterShare to FacebookShare to Pinterest
Labels: 1950's, Great Britain, Mini-Challenge, post war, Teddy Girls

This is a fascinating subject, Susie. Thanks for sharing it with us - the Teddy girls are sure to inspire some very interesting poetry.

Whew! Very interesting reading. Not Teddy Bears, for sure for sure. have a fine weekend Susie and Toads.

This is so COOL! I am moving my daughter into her college digs over the next few days. I so hope to be back to add something for this! Really, it is COOL!

Helen, I was born in 1951 and I can remember lots of things.

Thanks Kerry, I thought they were really interesting. I actually heard about them from a post on Facebook. Thought it would make an excellent challenge.

@Thanks Susan. They certainly weren't Teddy Bears.
@Thanks Grace!
@Margaret, exciting times for your girl starting college!! Looking forward to what you will create from the challenge!

Dear Marian, I think your poem is spot on! Excellent reading of the times and the characters.

I re-posted Jacqueline's link because the other one was not working.

Thank you, Kerry, and Susie for such a great prompt! Love it.

This was/is a fascinating subject.
I wanted to read and read and know more about them.

Vaguely I knew they existed, but don't recall the name Teddy girls.
Wisconsin was back in the 1950s not
very progressive with the news,
or discussing anything that was not
approved of...the Teddy Girls would
have been a none subject...a negative mention about how could someone look, think like that and on to white gloves and who had the best manners at the last event.

I never rebelled except to marry young...at 20...and move away with my Navy husband. I'm the "black sheep" in the family because I'm now rebelling against the way I was expected to live, ... a whole value structure other than upper class. So, that is why I think I chose the photo I did to write about.
Peace
Siggi

Siggi, I rebelled in my own way in the 60's. I lived in a small town farming community and I didn't fit in. I cut my blond hair like the Beatles and gave up caring what people thought about me. I seem to be getting a bit of that attitude back. :)

I had a rough & busy day yesterday, but truthfully I was only using my frantic pace as excuse for pretending at writers block. If I knew why it was so difficult for me to express my reaction to what I see in the Teddy Girls as something along the lines of social alienation, my therapist would be happy with the breakthrough. What finally pushed my pen, though, was the whole group of you Toads. I always read all the poems linked in these posts, even though I get too busy writing and doing real life to comment as much as I ought. But this time, when I read the other Teddy-inspired poems here, that is what kicked my own pen into moving. Thanks for yet another great prompt, and thanks more than ever for the poems everyone writes here. ✒Cyn

Cyn, thanks so much for taking part in the challenge. I totally agree that my fellow toads are a wealth of inspiration. I feel so blessed to be part of this amazing group!