Today, I am bringing you the second part of the article Dr Hisashi Nakamura so kindly wrote for Real Toads on the art of writing tanka poetry in English. If you happened to miss My Thoughts on Tanka (Part 1), I urge you to read it to fully appreciate the next installment. We continue where we left off, and allow Dr Nakamura to explain how he came to writing tanka for an English audience, when he encountered several problems in gathering source material. 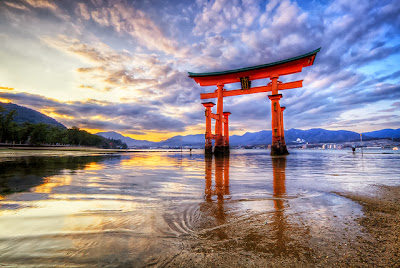 The first problem was and still is that there are very few good English translations of many tanka which are considered to be historical masterpieces in Japan and some of them have never been translated into English. The lack of good translation or any translation is especially significant when it comes to the tanka in Shin Kokin Wakashu (Extra Info HERE), which many poets evaluate as the summit of tanka poetry. The anthology was compiled in 1205 and some modern poets consider that tanka poetry has never transcended its achievements.

The second problem is that there are many well-known English translations of tanka which are actually wrong. The best example is a tanka by Izumi Shikibu about the moon on the mountain edge and dark paths. It may be translated as follows:

From one dark path
Into another
Again I may stray.
Light the long way,
Moon on the mountain rim.

Here Izumi Shikibu is in fear that she may stray into another dark path of life as she has done so in her past. She may be referring to her love affairs in the past. Because of this fear she is asking the moon to light her way in front so that she can follow it without straying. The moon is a symbol of enlightenment or an enlightened person in Buddhism. “From one dark path into another” is found in a Buddhist sutra entitled The Lotus Sutra. However, many English translations available use “must” instead of “may”. For example, “The way I must enter” or “I soon must go”. The translators are not aware of the meaning of the classical usage of the word “beki” in this tanka. “Beki” means “must” in modern Japanese, but it was used differently then. Above all, there is no reason why she “must” enter another dark path!

Another problem associated with the translations of this famous tanka is that many translators provide such notes as “This is believed to have been Shikibu’s final poem, written on her deathbed.” This is a groundless myth. The tanka was included in Shui Wakashu which was compiled by 1007 and Izumi Shikibu lived at least until 1027.  (To be continued...) 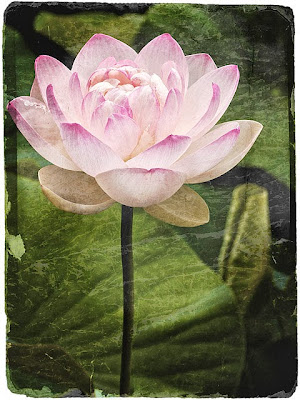 
The characteristics of classical tanka may be summarised in seven points. (Points 3 and 4 will be the focus of today's discussion. Please refer to the previous article linked above to refresh your memory of Points 1 and 2.)


3 The Essence of Classical Tanka

A tanka is often written when a poet is moved by a feeling called “aware”. Here “a-wa-re” is not an English word but Japanese. “Aware” is a feeling evoked by things which are transient. It is usually tinged with melancholy or sadness but the transience is perceived as essentially beautiful, not tragic. According to a prominent scholar of Japanese literature, Motori Norinaga (1730 – 1801), the essence of tanka is “aware”.

Aware is a short for “mono no aware”, which means roughly “the sadness of things” as “mono” in Japanese means “things”. Classical poets felt “aware” when they encountered such things as: falling cherry blossoms; a small boat on a river; dew drops; wild geese returning to the north; the wind passing through a rice field; the cry of a stag; morning mists; autumn leaves; trembling bamboo leaves; reeds in the marshes; and an autumn evening.

In modern days people may be moved to feel “aware” not only by things in nature. For example, in the film American Beauty Ricky shows the most beautiful thing he has ever filmed with his movie camera, saying, “We're in an empty parking lot on a cold, gray day. Something is floating across from us... it's an empty, wrinkled, white PLASTIC BAG. We follow it as the wind carries it in a circle around us, sometimes whipping it about violently, or, without warning, sending it soaring skyward, then letting it float gracefully down to the ground.” We can observe the “aware” Ricky felt although he may not have had the concept of “aware”.

Among classical tanka the one below by Fujiwara no Shunzei (1114-1204) is an example to show “aware”. In those days aristocrats travelled following cherry blossom as if they were carrying on a hunt. The imperial family had hunting fields in Katano where Shunzei and others were camping out to see cherry blossom. He must have felt the beauty of the falling petals while a thought of what was left of his life crossed his mind.

Will I ever see this again?
Cherry blossom hunting
In the fair fields in Katano;
Snow flake petals falling
In the spring dawn. 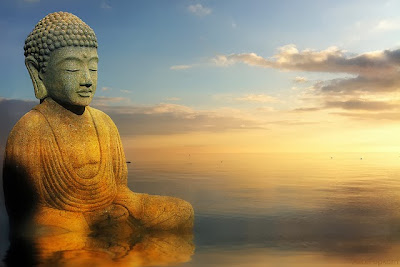 4 The Interaction with Buddhism

Tanka developed interacting with the spread and development of Buddhism, which came to Japan in 538. It is quite natural that tanka and Buddhism interacted with each other because the first principle of Buddhism is that there is nothing that is permanent and thus everything is subject to change. This echoes with “aware” which stems from the transience of things in the world.

The influence of Buddhism on tanka can be seen in the following tanka which was composed by Monk Saigyo (1118-1190). In this tanka the moon has sunk behind the mountain in the west where the Paradise of Amitabha (the Buddha of Infinite Light) exists. In his longing for Paradise Saigyo “sends his soul” after it. The darkness after the moon has disappeared in the west symbolises spiritual darkness. He realises that his real being has not yet, in fact, shed all its earthly desires.

Sending my soul away
To where the moon has sunk
Behind the mountain,
What shall I do with my body
Left in the darkness?

Our challenge today, is to explore the tanka form as presented here by Dr Nakamura. There is no limit to the number of tanka you may write, and you may also share older examples of tanka you have written, if you prefer.

Please Note: All translations in this, and other articles by Dr Nakamura posted on Real Toads, are his own. When translating a poem, he does not try to keep to the strict 31syllables, but rather focuses on conveying meaning as exactly as possible. All other tanka, not ascribed to another author, are written by Dr Nakamura and used here with permission.

This was really thought-provoking, but I couldn't find part 1 even after clicking on the link.

The first part is here:

Thanks for the additional notes Kerry ~

Wishing you all Happy weekend ~

Thank you for pointing that out to me so promptly, Turtledove. I have fixed the link!

Kerry, I just love this article and deep exploration of tanka with Dr. Nakaumura. Thank you so much for prioritizing and sharing. It's just wonderful and inspiring! Thank you.

A very insightful look at a difficult-to-translate form--one of my favorite non-Western forms. Thank you, Dr. Nakamura, for your lucid exposition, and thanks to Kerry, also.

Thanks for this Part 2, Kerry. This is the first time I have written Tanka without Counting. I was able to stay out of my head. It felt so simple--but maybe I missed something?

Kerry and Dr. Nakaumura, I am excited to explore part 2. I am fascinated with the form and its beauty~ Thank you!!

I enjoyed Part 1 of this series and was happy to see it continued today with more valuable information. I just love it, so inspirational! Thank you Kerry and Dr. Nakamura for introducing us to this beautiful form.

I so enjoy the unveiling of this beautiful poignant form!! Thank you for the feature Kerry and thank you to Dr. Nakaumura,for sharing with us. :)

Thanks so much Kerry for this inspiring second part explanation of tanka. And I would also like to thank Dr. Nakaumura for sharing with us.

How wonderful of Dr. Nakamura to share with us, and how ungrateful of me to be completely unable to absorb a new thought today. I will come back tomorrow, see how my brain is taking things in, and, if nothing else, read and comment on the work of my fellow Toads.
K

Thank you very much.. I'm so excited to learn a little tanka...

I can't wait to read all the offerings! Thank you Kerry and Dr. Nakaumura, I feel like this challenge is a gift. I want to write more~

autumn seems perfect for writing tankas, so many images to grasp... at least for me, discovering tankas has been fruitful. thank you for showing them to me.

Still new to the form, but here goes anyways. I'm sure Fireblossom would like to set the prompt ablaze, one way, or the other. :) Back tomorrow to visit... ~ M

VERY busy weekend - posting late and also posted to Open Link Monday. Thanks, Kerry, I LOVE this series. Makes my brain work too hard, though :)