Get Listed with Brendan: Moon Madness

First of all, thanks to Kerry and the Toads crew for welcoming me back to the pond and for this opportunity to pitch a prompt. Sylvia Plath wrote The Moon and the Yew Tree in response to a prompt, so I thought it would be interesting to use some words from that poem as a sort of responsorial prompt. Our conversation often does that, one poem suggesting another … the road of language leads to many startling way-stations. 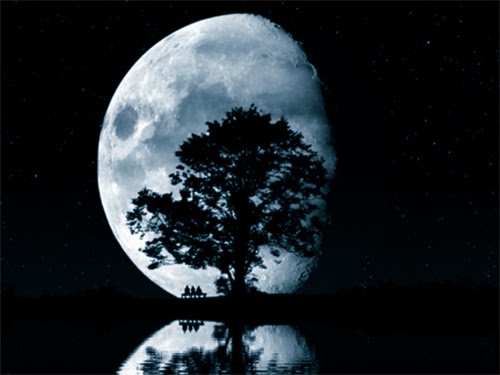 The story: In 1961, Plath and her then-husband Ted Hughes had moved to a house in the Devon countryside. A new, deeper, wilder voice was beginning to emerge in her poems that would go into her posthumous collection Ariel. Across the way from their house was the ancient Anglican church of St. Peter’s, with its 13th-century tower and an adjoining graveyard. A very old place—and not far from it were the ruins of an pre-historic hill-fort. Fertile loam for two poets whose best work emerged from their dirt. One morning in October, when a full moon was setting just behind the yew tree in the graveyard, Hughes assigned Plath the job of writing a verse “exercise” about the scene. “The Moon and the Yew Tree” is the result. If you haven’t read the poem (linked above) you might want to wait until after you’ve tried your hand at writing a poem with its salt.


I first heard “The Moon In the Yew Tree” nearly 40 years ago when I took my first college class in American poetry. Hefty yet keen as an axe-blade, that poem split wide the deep vaults of the English language for me, a place I immediately fell in love with. Marvell called it “the dazzling dark.” I heard it again reading places in Shakespeare (think of the Weird Sisters), in Melville’s Moby Dick—and, ironically, much later, in Ted Hughes’ poems. The roots of poetry are very old, and there are sounds in poetry that are spooked with these reaches. Dark and resonant, soaked in the waters of the dead. They aren’t words to be taken lightly. Plath was peerless in her fearless embrace of them; perhaps too much so. Plath committed suicide in February 1963 during one the coldest winters to hit northern England in a century.

Anyway, the deep lyric resonance of “The Moon and The Yew Tree” attended some of my most awful moments in my early, suicidal 20s. Yet as I now re-read her collected poems, I savor witnessing some of the most jaw-dropping encounters with the language. To me it seems there was a Savage Editor at work in her inner ear, cutting away everything but the deadliest essentials. Hughes once said that Plath was like a war-bird in her thesaurus, circling words with heavy ink, mining the burningest ones to set into her revisions. That saying that that which doesn’t kill us will set us free may be truest here. As the moon now nears fullness, I wonder if we can spoon the following 15 words from the still-simmering cauldron of Plath’s “The Moon and The Yew Tree.” Maybe there's fresh inspiration even after a perfection. Happy writing! -- Brendan

Pick at least 5 of the following words to use in a poem of your own design and link to it below.

Imagined By Kerry O'Connor at 12:00 AM
Email ThisBlogThis!Share to TwitterShare to FacebookShare to Pinterest
Labels: Blueoran, Brendan., Get Listed, Sylvia Plath, Ted Hughes

Just read it. What a powerful poem!. Thank you for sharing the work of Ms Plath.

Wonderful set-up, Brendan. I'm eager to see what can do with this.

From what I've read in the poems posted here so far, it's incredible how powerfully sourced words continue to resonate. But then, that's poetry, isn't it ... Wonderful moonlight this early early morning!

I adore Sylvia, but I don't know this poem! I've just finished writing mine and will read it next.

Thanks for the challenge.

Have a nice day.

home sick today, gah! stay well, everyone. thanks for this fantastic prompt, Brendan.

I do so love prompts consisting of seemingly disparate words.

Just got back from work in heatwave conditions... dead on my feet. Brendan, I so appreciate all the effort that went into your feature, and I intend to write something - but forgive me if I only get to it over the weekend.

The Ariel link in the post leads to a pdf of the complete collection - well worth re-reading.

Wow, Brendan, your essay is exquisite, a great match to the poem you resurrect from some depths. I never do word list poems and rarely read them, but 2 fine poems based on your prompt brought me here. Never say never! Thanks.

A potent selection, Brendan. I an rather an abstainer from the cult of Plath, but her work is another story--you do an excellent job of portraiting her voice, which for me is both exquisite, and alien cold and deadly, and in this, she makes the color blue as sinister as the color black, but still radiant with her own often antithetical light. A difficult but inspired poem, and an excellent list to work from--thanks for the challenge.

As always, I will not be reading anyone''s response before I get something myself, assuming I can, so see everyone then.

What a powerful selection Brendan. My writing is rather weak when held up to the light of Plath, but I took on the challenge.

wonderful prompt! i have not yet read "The Moon and the Yew Tree" but look forward to do so soon.

Thank you for such a full and informational post and challenge, Brendan.

I love Sylvia Plath and this was a real treat!

Fascinating information and great challenge. I was unfamiliar with the poem, so thanks for that.

Wonderful idea for a prompt!

Thank you for the wonderful inspiration Brendan ~ Her work & words inspire ~

Happy week to everyone ~

Great challenge Brendan, should have paid attention to the advice about waiting to read Ms. Plath's poem until after you had composed your own .... I will next time!
Wishing you a good day ..

friends, thanks for your well wishes. the tummy-bug is subsiding, and i believe i will live! but i am behind in reading your moon-poems, will catch up. xoxo!

Sylvia Plath - oh one of my favorites thanks for the awesome share and it is such a marvelous prompt. It resonates with me especially given that my poetry blog is is such utter therapy to me. Will try to visit and comment on other links shared.

Sylvia Plath - oh one of my favorites thanks for the awesome share and it is such a marvelous prompt. It resonates with me especially given that my poetry blog is is such utter therapy to me. Will try to visit and comment on other links shared.

been busy. looking forward to this, even if posted late. ~

er, just noticed that "candles" is on there twice, making it a 14 work list?

People. Look up "spirituous" before you use it. It is not a synonym for "spiritual".